Erdogan Blackmails The EU Powerhouses As Only Turkey Can Do 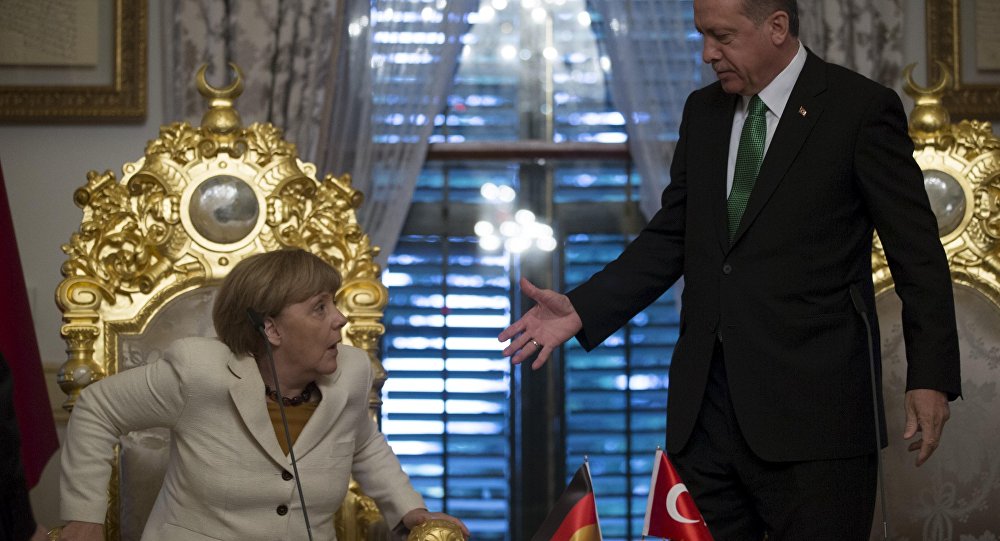 Turkey Blackmails The EU Powerhouses As Only Erdogan Can Do

Turkey discovers the joys of refugee blackmail. The EU/NATO rushes to aid Turkey in Syria.

Here’s the blackmail – Erdogan intentionally releases tens of thousands of Syrian refugees into Europe to put pressure on EU politicians who quickly lose the support of their people and face the meteoric rise of right wing parties. And then, the next thing you know, Merkel, Hollande and every other EU leader is looking to cut a deal with Erdogan to keep the refugees in Turkey.

Isn’t that how it all went down? Except we’re missing one important factoid here, because according to the first op-ed “The increase in military cooperation within NATO… and the piling up of NATO forces near Turkey’s border”…took  place in parallel with the deal between Ankara and Brussels.”

Get it? So there was a quid pro quo that no one wants to talk about.  In other words, Germany, France and the UK agreed to support Erdogan’s loony plan to conduct military operations in Syria, risking a serious dust-up with Russia, in order to save their own miserable political careers. December 04, 2015 “Information Clearing House” – “Counterpunch” – You know the country has really gone to the dogs when Washington’s main allies in its war on Syria are the two biggest terrorist incubators on the planet. I’m talking about Saudi Arabia and Turkey, both of which are run by fanatical Islamic zealots devoted to spreading violent jihad to the four corners of the earth. Not that the US doesn’t have blood on its hands too. It does, but that’s beside the point.The point is that if you’re trying to sell your fake war on terror to the public, then you might want to think twice about lining up with Grand Sultan Erdogan and King Chop-Chop of Riyadh. The optics alone should have sent the White House PR team running for cover. I mean, couldn’t they have hired squeaky-clean Iceland to join the fray just to persuade the public that the ongoing proxy war wasn’t a complete sham. Which it is.

It all goes to show that no one in the administration really gives a rip about appearances anymore. Obama is going to do what he wants to do, and if you don’t like it: Tough!

Isn’t that the message?

Of course it is. But just look how that apathy transfers itself into other areas of governing like, let’s say, strategic planning. Take Syria for example, where the think tank pundits were given the task of coming up with a plan to topple a secular regime without: 1–triggering a violent insurgency.  2–igniting massive antiwar demonstrations around the world and, 3—producing hundreds or thousands of US casualties. In other words, our esteemed leaders didn’t want another Iraq which is understandable.

Anyway, that was the basic assignment. So the think tankers came up with this brilliant plan to enlist Sunni militants that the CIA would fund, arm, train and deploy into Syria to shoot the place up, raise holy hell, and then topple the regime of Syrian President Bashar al Assad.  That was the plan, at least.

Four and half years later, the place is a worse mess than Iraq.  Half the population is either dead or internally displaced, the civilian infrastructure is a shambles, and nothing has been achieved. Nothing.  Assad is safely tucked away in Damascus, the jihadi proxies are on the run, and everyone hates the US more than ever.

The downside is that now Washington finds itself backed against the wall with precious  few options that don’t involve a direct confrontation with Moscow. Of course, all of this could have been avoided had the White House been more eager to negotiate a settlement to the conflict months earlier in Vienna. But, instead, the bullheaded Obama team decided to stick with its dreary “Assad must go” mantra which put the kibosh on any long-term agreement or ceasefire proposal. So now, the Russian-led coalition has made significant gains on the ground, retaking numerous key cities, highways and airbases in the west and south while sending US-backed terrorists fleeing eastward towards Raqqa.  These developments have forced Washington into a fallback position that will likely entail air-support for Turkish ground forces who will be deployed to Northern Syria to take and hold area sufficient for a “safe zone”, which is an innocuous sounding moniker the media invokes to conceal the fact that Turkey plans to annex sovereign Syrian territory which, by the way, is an act of war.

Some readers may have noticed disturbing headlines like this in the Wall Street Journal: “U.S. Urges Turkey to Seal Border”

Or this Reuters piece that popped up on Monday:  “NATO allies act to strengthen Turkey’s air defenses”

Why, you may ask, does Obama want Turkey to close the border now when the horse has already left the barn? What I mean is that the White House has known for over 3 years that the bulk of the jihadis were transiting Turkey on their way  to Syria, just like they knew that ISIS’s oil was being transported across Turkey. They knew it all because they have their damn spy satellites and  AWACs circling overhead. In fact, they could probably tell you how many bumblebees crossed the border at any given time, so they sure as heck saw the throngs of bearded roughnecks moving southward in droves.  So why is it so urgent to close the border now, after all, the damage is already done, right?

Could it have something to do with the fact that Putin’s legions are moving north to seal the border? Could there be an alternate objective, for example, could the US and Turkey be setting the stage for an incursion into Syria that would secure the land needed for the glorious safe zone?

That’s what most of the analysts seem to think, at least the ones that haven’t been coopted by the mainstream media. But why is NATO suddenly getting involved? What’s that all about? After all, Putin was reluctant to even commit his airforce to the Syrian conflict. It’s not like he’s planning to invade Turkey or something, right?

Of course he’s not thinking of invading Turkey. That would pit Russia against NATO in a planet-incinerating fight-to-the-death. That might please some of the crackpots in Washington, but just about everyone else would rather avoid the mushroom cloud scenario.

So, what’s really going on?

For that, we turn to Moon of Alabama that provides this excellent summary in a recent post titled:  “The Real “Terrorist Sympathizers” Want To Wage War On Syria … And Russia”. Here’s an excerpt:

“Who initiated this sudden rush within major NATO governments to get parliamentary blank checks for waging a long war on Syria? Not only in the UK but also in France and Germany?

The German government turned on a dime from “no military intervention in Syria ever” to “lets wage a war of terror on Syria” without any backing from the UN or international law. .. Who initiated this? A simple, medium size terror attack in Paris by some Belgians and French can not be the sole reason for this stampede.

Did Obama call and demand support for his plans? What are these?

I smell that a trap is being laid, likely via a treacherous Turkey, to somehow threaten Russia with, or involve it in, a wider war. This would include military attacks in east-Ukraine or Crimea as well as in Syria. Obama demanded European backing in case the issue gets out of hand. No other reason I have found explains the current panic. The terrorists the “west” supports in Syria are in trouble. The real terrorist sympathizers need to rush to their help. It is a start of all-out war on Syria and its Russian protectors.” (“Terrorist Sympathizers” Want To Wage War On Syria … And Russia“, Moon of Alabama)

Is that what’s going on? Has Turkish President Erdogan figured out how to hoodwink the NATO allies into a confrontation with Russia that will help him achieve his goal of toppling  Assad and stealing Syrian territory?

It’s hard to say, but clearly something has changed,  after all, neither France, nor Germany nor the UK were nearly as gung-ho just a few weeks ago. Now they’re all hyped-up and ready for WW3. Why is that?

Ahh, Grasshopper, that is the mystery, a mystery that was unraveled in an op-ed that appeared in the Tuesday edition of the Turkish newspaper Hurriyet Daily News. Here’s the excerpt:

“The increase in military cooperation within NATO countries against ISIL and the piling up of NATO forces near Turkey’s border with Syria take place in parallel with the recent deal between Ankara and the Brussels over Syrian refugees and the re-activation of Turkey’s EU accession bid.” ….(“Western forces pile up on Turkey-Syria border“, Hurriyet)

Okay, so Erdogan worked out a deal with the other NATO countries. Why is that such a big deal?

Well, check out this blurb from the Today’s Zaman:  “Erdogan’s advisor, Burhan Kuzu, summed it up even more succinctly saying: “The EU finally got Turkey’s message and opened its purse strings. What did we say? ‘We’ll open our borders and unleash all the Syrian refugees on you,’” Kuzu stated in his controversial tweet… ” (“EU bows to Turkey’s threat on refugees says Erdoğan advisor“, Today’s Zaman)

Blackmail? Is that what we’re talking about, blackmail?

Let’s summarize: Erdogan intentionally releases tens of thousands of Syrian refugees into Europe to put pressure on EU politicians who quickly lose the support of their people and face the meteoric rise of right wing parties. And then, the next thing you know, Merkel, Hollande and every other EU leader is looking to cut a deal with Erdogan to keep the refugees in Turkey.

Isn’t that how it all went down? Except we’re missing one important factoid here, because according to the first op-ed “The increase in military cooperation within NATO… and the piling up of NATO forces near Turkey’s border”…took  place in parallel with the deal between Ankara and the Brussels.”

Get it? So there was a quid pro quo that no one wants to talk about.  In other words, Germany, France and the UK agreed to support Erdogan’s loony plan to conduct military operations in Syria, risking a serious dust-up with Russia, in order to save their own miserable political careers.

Boy, if that doesn’t take the cake, than I don’t know what does.

Mike Whitney lives in Washington state. He is a contributor to Hopeless: Barack Obama and the Politics of Illusion (AK Press). Hopeless is also available in a Kindle edition. He can be reached at fergiewhitney@msn.com.

TAP.  Thanks to the EU, Britain now has to fight wars to secure our borders.  Just quit the EU.