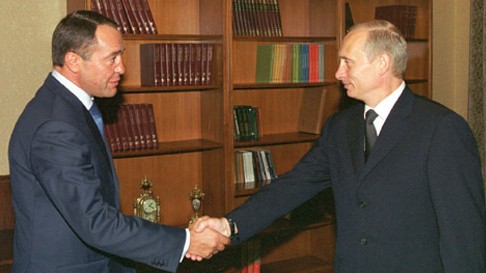 TMR Editor’s Note:
It does not look very good when a powerful Russian media executive unexpectedly dies in a hotel room … especially when it occurred at the Dupont Circle Hotel in Washington, D.C.

Not only was Mikhail Lesin responsible for the formation and extraordinary success of international media powerhouse RT.com, he has been a very close associate and political aide to President Vladimir Putin for several years.  Just how significant is the RT.com media platform?

RT, originally Russia Today, is a Russian state-funded television network which runs cable and satellite television channels, as well as Internet content directed to audiences outside the Russian Federation. RT International, which is based in Moscow, presents around-the-clock news bulletins, documentaries, talk shows, and debates, as well as sports news and cultural programmes about Russia. RT operates as a multilingual service with channels in three languages: the original English language channel was launched in 2005, followed by the Arabic language channel in 2007 and the Spanish language channel in 2009.
Source: RT (TV network)

Mikhail Lesin’s untimely death is surely a blow to President Vladimir Putin’s longstanding initiative to establish Russian media in every major market around the world.  His close partnership with Lesin was critical toward achieving that goal.  Both perceived the necessity of establishing a global media network of Russian news organizations that could serve as a countervailing force to the massive propaganda machine known as the Western mainstream media (MSM).

RT is a brand of “TV-Novosti”, an “autonomous non-profit organization”, founded by the Russian news agency RIA Novosti on April 6, 2005.  During the economic crisis in December 2008, the Russian Government headed by Vladimir Putin included ANO “TV-Novosti” in the list of core organisations of strategic importance of Russia.
Source: RT (TV network)

Putin accurately assessed the urgency of establishing the RIA Novosti brand worldwide during the stock market crash and subsequent economic collapse of 2008.  The Western powers were crashing the ruble and trashing Russian stocks at every turn in order to scare international investors to dump their investments.  Such a flight of capital from Russia flew right into the open arms of Anglo-American and European  markets which were desperate in the wake of the Lehman Brothers bankruptcy.

Putin saw that the nations of the Anglo-American Axis* (AAA) were vastly arrayed against Russian interests around the globe during the following recession.  He also astutely observed that the AAA-allied  countries would sacrifice the Russian economy in a New York minute in order to save their own.  The economic sanctions aggressively promoted by the USA during and after the Ukraine War in Donbass serve as a testament to this ongoing geopolitical strategy to subjugate and dominate the entire Eurasian continent, especially Russia.

In view of this relevant history and critical context the surprising death of Mikhail Lesin must be thoroughly investigated.  If there was in fact foul play, then such an assassination serves as a glaring example of the level of violence which the AAA will now resort to.  All Russian citizens visiting the USA in particualr have been put on notice.

BY AP AND AFP

Get The Times of Israel’s Daily Edition by email
and never miss our top stories   FREE SIGN UP!

The Russian Embassy in Washington on Friday confirmed the death of Lesin, whose body was discovered Thursday. Russia Today reported on its website that Lesin, 57, died of a heart attack.

Russia Today, commonly known as RT, credited Lesin with “inspiring the creation” of the agency.

Putin expressed his sincerest condolences to Lesin’s family early on Saturday, according to RT.

“The president has a high appreciation for Mikhail Lesin’s massive contribution to the creation of modern Russian mass media,” the Kremlin said in a statement cited by the news channel

Lesin served as Russian press minister from 1999 to 2004 and presidential media adviser from 2004 to 2009, RT said. In 2013, he became a senior executive at Gazprom-Media, Russia’s largest state-controlled media company.

Lesin has been accused of limiting press freedom in Russia, according to an ABC report.

Republican Senator Robin Wicker of Mississippi called for a probe last year of Lesin on suspicion of money laundering and corruption, ABC said.

He allegedly amassed millions of dollars in assets in Europe and the United States while working for the government, including $28 million in real estate in Los Angeles.

“That a Russian public servant could have amassed the considerable funds required to acquire and maintain these assets in Europe and the United States raises serious questions,” Wicker wrote, according to ABC.

It added that it is unclear if the FBI ever began a probe.