The Real Purveyors Of Terrorism Are Being Exposed, Their Agents Of Terror Wiped Out 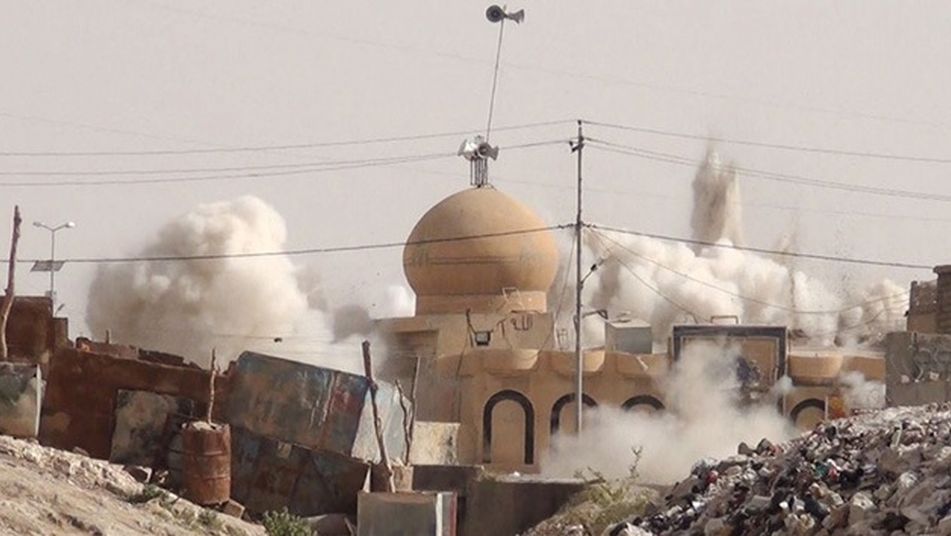 A total of six mosques across the northern Nineveh province of Iraq have been destroyed by ISIS forces.

The Real Purveyors Of Terrorism Are Being Exposed, Their Agents Of Terror Wiped Out

TMR Editor’s Note:
There are two questions that are being asked by everyone who lives in the Middle East.

#1 — Why are the ISIS terrorists always wearing black balaclavas in a desert theatre of war.  Black gets very hot in the Mideast sun.  Really, who are these agents of terror, and where are they actually from?  Most importantly, who is busing them in?

“During the Crimean War in 1854 handmade balaclavas were sent over to the British troops to help protect them from the bitter cold weather. British troops required this aid, as their own supplies (warm clothing, weatherproof quarters, and food) never arrived in time”
Souce: Balaclava (clothing)

#2 — Why is ISIS, a purported cadre of Islamic jihadhis, destroying symbols of Islamic Culture?!   Don’t they need their bombs and ammunition to wage war?  Clearly, just like the USA did in Iraq, ISIL is quite purposefully demolishing the Muslim architecture whenever they capture a ‘prize’.   They are routinely blowing up the greatest monuments throughout the entire region, and yet they are supposed to be ‘Muslim’ terrorists? 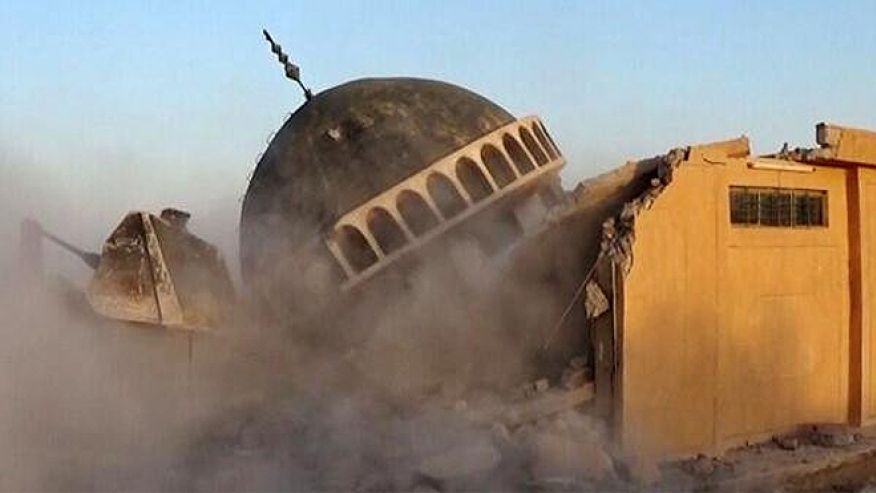 The Arc of Chaos Is Being Killed in Its Cradle

From the 1980s onwards, Polish-American geostrategist and former National Security Advisor Zbigniew Brzezinski’s ideas were at the forefront of the US’ foreign policy application all across the world. Be it through the admitted creation and arming of the Mujahedeen (which later grew into Al Qaeda and the Taliban) or the obsession to divide Ukraine from Russia (later culminating in EuroMaidan), Brzezinski’s ideas have become a destabilizing reality that have stretched across continents and decades.

US Rules Out Independent Investigation Into Afghan Hospital Attack

The most enduring legacy that he ever created, however, is the destructive theory of the “Eurasian Balkans” that he devised in his 1997 book, “The Grand Chessboard: American Primacy And Its Geostrategic Imperatives”. He postulated that it’s the broad arc of land from North Africa to Central Asia whose ripeness for divisive ethnic and sectarian strife is exactly what the US needs to exploit in order to indefinitely maintain its unipolar grip on global power.

The cradle of this concept has always been the Mideast, but with Russia working to resolve the chaos that the US created there and attempting to return the region to stability, it appears as though Moscow has finally begun to reverse Washington’s grand strategy. Let’s take a look at exactly what the “Eurasian Balkans” were intended to become, how the plans for weaponizing chaos were supposed to work, and the way that Russia rode to the rescue in stopping this madness.

Brzezinski ‘s idea for the “Eurasian Balkans” didn’t just come out of the blue. As a staunchly nationalistic Pole, he was well aware of his homeland’s interwar leader Marshall Jozef Pilsudski and the destructively innovative foreign policy of “Prometheism” that accompanied his administration.

This idea stipulated that the multiethnic and polyconfessional Soviet Union could be dismembered by giving weapons, training, and political support to peripheral identity revolutionaries in the Soviet Union for use in a grand forthcoming ‘liberation war’ against the central government in Moscow. The metaphorical connotation here was that this would be akin to how Prometheus gifted fire to man to help them become independent from Zeus, the strongest and most feared of the Greek gods.

Balkans and the EU: Questionable Engagement Doomed From the Start

The policy failed and ultimately amounted to nothing, but that didn’t stop Brzezinski from fantasizing about its comeback a couple decades later. The influence of Pilsudski’s identity obsession can be seen on Brzezinski’s late-1970s description of an “Arc of Crisis” which “stretches along the shores of the Indian Ocean, with fragile social and political structures in a region of vital importance to us threatened with fragmentation. The resulting political chaos could well be filled by elements hostile to our values and sympathetic to our adversaries.”

The mentioning of “fragile social structures” is a euphemism for identity conflict, which Brzezinski was unjustifiably paranoid that the Soviet Union would try to exploit. A couple years later, Brzezinski himself ironically took the lead in exploiting this very concept to its most radical extreme, convincing President Jimmy Carter to arm the founding fathers of Al Qaeda in their American-directed international jihad against the Soviet Union in Afghanistan. Brzezinski’s strategic thinking was that the militant momentum gained in the country could be carried over to Central Asia through the external orchestration of similar Islamist uprisings, which would then lead to a subsequent Soviet retreat all the way back to the Moscow and the independence of every republic that it left in its wake.

Inspired by what he felt was his concept’s success in contributing to the Soviet Union’s 1991 collapse, Brzezinski decided to expand upon its fratricidal nature by applying it towards other zones of potential identity conflict, namely the Mideast and North Africa. Seeing the ethnically and confessionally diverse Balkan region and its history of internecine wars as a thematic precedent (the latest of which were ongoing during the early 1990s and thus fresh in his mind), he named his finalized strategy the “Eurasian Balkans”.

To summarize the ideas about this that he laid out in “The Grand Chessboard”, Brzezinski believed that the instigation of chaotic conflicts in the North African-to-Central Asian space could preempt the consolidation of a grand Eurasian alliance between Russia, China, and Iran which would challenge contemporaneous American primacy and smash the Wolfowitz Doctrine of ‘sole superpower status’ to pieces.

The US would be left unscathed by this forthcoming black hole of chaos because its main Eurasian perches are in Europe and East Asia, and if worst came to worst and the supercontinent got caught in a massive conflagration, then the two ocean buffers that separate it from the pan-continental conflict zone would cushion any significant blowback it could realistically receive.

The US needed a spark to set off the flames of fratricide that it hoped would eventually engulf Russia, China, and Iran, and it created the ‘geopolitical flint’ to do so by the 2003 War on Iraq. By forcefully plopping itself smack dab in the geographic middle of the chaotic arc that it aimed to create, the US was in the best position possible for exerting destabilizing influence along each of its two broad ends. It didn’t waste a second in doing so either, since investigative journalist Seymour Hersh’s groundbreaking 2007 expose for The New Yorker, “The Redirection”, detailed all the means in which it sought to do this. Be it through fostering sectarian hatred or overthrowing the Syrian government, Washington had a big bag of tricks at its disposal that time would eventually prove it was planning to deploy. The trigger for setting off the Mideast’s “Blood Borders” breakup, and as was tangentially planned, that of North Africa and Central Asia, was the “Arab Spring” theater-wide Color Revolutions, but the Syrian population’s staunch defense of their sovereignty stopped the US’ plans dead in their tracks and placed them on indefinite standby.

Russia to the Rescue

Enter Russia, which has now committed itself not only to defeating terrorism in the Mideast, but as a logical and extended result, reversing the destabilization that the US has spawned and consequently restoring order along the Syrian-Iraqi apex of the “Arc of Chaos”.

To flip Brzezinki’s “Eurasian Balkans” theory on its head, if the Middle Eastern countries that he had so precisely targeted for domestic tumult prove themselves capable of remaining united and strong in the face of American-directed adversity, then this would have an exemplary effect in stabilizing the North African and Central Asian ends of the arc, thus crippling the US’ decades-long designs of creating Afro-Eurasian chaos.

The geopolitical facets of the US’ grand strategy start and end in Syria, which is why Brzezinski finally lost his characteristic cool and just threw an epic temper tantrum directed against Russia. Writing in an op-ed piece for the Financial Times, he suggested that “The Russian naval and air presences in Syria are vulnerable, isolated geographically from their homeland. They could be “disarmed” if they persist in provoking the US.” The devil himself couldn’t have devised a more tempting way to destroy all of humanity than that, but just in case American policy makers got any crazy ideas from their favorite strategist, Russia’s awe-inspiring cruise missile strike from the Caspian Sea swiftly discredited them and proved that Brzezinski’s intimations of a ‘vulnerable, geographically isolated’ Russian force in Syria were totally brainless. For once in his lifetime, the American establishment doesn’t seem eager to follow Brzezinski’s advice, and that might mean that for once in our lifetimes, the US might be exercising a relative semblance of sound judgement.