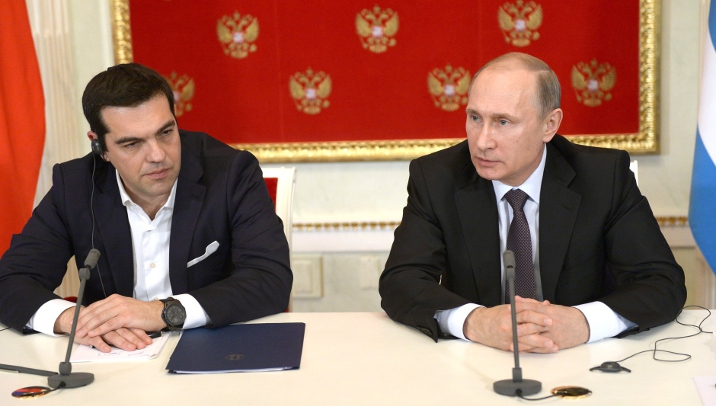 Europe in Denial as Tsipras Cuts Deals With Moscow Tsipras – not a genuine guy

earlier this year during Greece’s negotiations with the European institutions were manipulative and were not intended to lead to a realignment with Russia.

Instead we said that Tsipras was trying to use Russia as a scarecrow to panic the Europeans into concessions.

We also said that though the Russians were initially willing to help, they quickly figured out what Tsipras was up to, so that beyond a certain point their offers of help became progressively less generous.

This was an isolated view. Pretty much all of the rest of the international media was reporting Tsipras’s approaches to Moscow differently. In fact there was a great deal of alarmed – or hopeful – talk about how Greece’s loyalty to the West was in jeopardy, and about how it was preparing to tilt towards Russia and the BRICS.

Confirmation that what we said was true has now come from Stathis Kouvelakis, a former member of Syriza’s central committee, who is close to Panayiotis Lafazanis, Greece’s former energy minister, who now heads Popular Unity, the new left wing grouping formed from former members of Syriza who oppose the latest bailout agreement.

Lafazanis as energy minister negotiated the gas pipeline deal with the Russians. He would therefore have had more intense discussions with the Russians than any other official in the Greek government. Comments from someone close to him, who was also a member of Syriza’s central committee in his own right, should therefore be considered authoritative.

Here is what Kouvelakis had to say in an interview for the French newspaper L’Humanite.

“……..fundamentally the Russians did not know what the Greeks wanted. They were extremely distrustful, since they had the impression that Greece’s moves toward an opening were being used as a card in its negotiations with the European institutions, as a PR tool.

The photos with Putin served as a means of exerting pressure, but it all remained very superficial, and they could tell that it was not going to be followed up with concrete commitments. And they did not appreciate being toyed with.”

This is exactly what we said.

This is not just a historical issue. We have also said that the pipeline deal with Russia negotiated by Lafazanis is doomed.

There continues to be a certain unwillingness to accept this fact with hopes that the deal can still be rescued – though the Russians are unlikely to have any such illusions.

It is indeed the case that the Greeks have on several occasions over the last few weeks assured the Russians that they are committed to the pipeline project.

This should be seen for what it is – an attempt by Tsipras to retain some credibility with his former supporters by not rushing to shelve a deal that is popular with them.

That means that it is only a matter of time before the pipeline deal goes the same way as South Stream.

Only one thing might save the project, and that is an election victory by Popular Unity.

With Popular Unity at present polling only in single figures that looks unlikely.

Even if Popular Unity wins, though the pipeline project may be saved, the realignment with Russia that many hope or fear is unlikely to happen.

As it happens, in his interview, on the subject of relations with Russia, Kouvelakis (who is now one of the leaders of Popular Unity) has some very interesting things to say:

“Developing relations with Russia or with China is not exactly the same thing.

The Chinese interest is in trade and business. We don’t want the privatizations that so attract the Chinese; but at the same time, they have made openings with regard to establishing a BRIC bank.

With Russia, it’s a different matter, since it takes an essentially geopolitical view: for Russia, economic interests are subordinate to this geopolitical outlook.

It is also clear that having relations with Russia in no sense means thinking that Putin is politically or ideologically close to us. This is a question of international relations.”

These sentiments are no less manipulative than those of Tsipras.

Instead of a serious intention to build a firm relationship based on mutual interest and trust, there is an arrogant assumption that Greece’s supposed geopolitical importance to Russia can be used to Greece’s advantage.

Such an approach, if it is ever attempted, would be bound to fail since it grossly overestimates Greece’s geopolitical importance to Russia – which in reality is slight.

It is anyway simply wrong that the Russians subordinate their economic interests to their geopolitical goals. That is a common Western trope but there is no evidence to support it.

There continues to be a wide belief or hope that the genuine regard Greeks and Russians have for each other and their shared Orthodox faith somehow means that a political alignment of Greece and Russia is only a matter of time.

Those who entertain this hope are setting themselves up for disappointment.

When even one of the leaders of Greece’s main Leftist anti-euro party can only think of relations with Russia in a manipulative way, the conclusion has to be that prospects for a genuine partnership between Greece and Russia simply don’t exist.