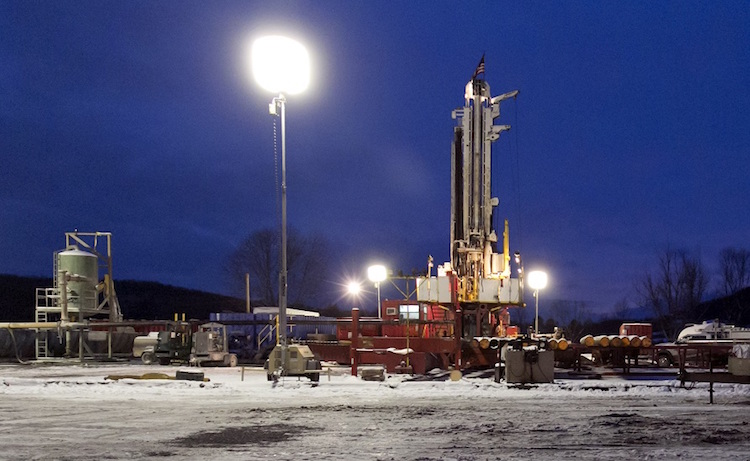 The amount of radioactive material in Pennsylvania homes has increased alongside the state’s fracking boom, according to a new study published Thursday in the journal Environmental Health Perspectives.

Researchers from Johns Hopkins Bloomberg School of Public Health asserted that levels of radon — a odorless, carcinogenic, radioactive gas — have been on the rise in Pennsylvania homes since 2004, around the same time the state’s Department of Environmental Protection (DEP) beganrapidly increasing the number of permits it issued for unconventional gas drilling. There had been no similar increases in indoor radon concentrations prior to 2004, the study said.

Radon is the second-leading cause of lung cancer in the world after smoking, according to the theEnvironmental Protection Agency. Approximately 40 percent of Pennsylvania homes are believed to have radon levels above the recommended limits, according to the state DEP.

The researchers were careful to note that the side-by-side increases in radon and fracking only represented a correlation, and should not be taken as a declaration that fracking directly caused an increased radon presence in homes. However, study leader Brian Schwartz told ThinkProgress that it’s possible fracking could be the cause, and noted that more research is needed on the subject.

“We’re not convinced this industry is playing a role [in increased radon levels],” he said, noting Pennsylvania has had a radon problem long before fracking started. “All we’re saying is these findings provide no reassurance that the industry is not playing a role.”

To make their claims, the Johns Hopkins researchers obtained radon data on nearly 2 million indoor radon tests conducted in the state between 1987 to 2013. Using some of that data, they associated radon levels with the homes’ respective geologies and water sources, along with the season the measurements were taken, fracking activity in the area, and the weather at the time.

The research is not the first to raise concerns about radioactivity exposure from Pennsylvania’s fracking operations. The state’s Marcellus Shale — the underground rock formation where gas is derived from — contains a lot of Naturally Occurring Radioactive Material, or NORM. Specifically, the Marcellus Shale has 20 times more NORM than typical shale formations, according to theInstitute for Energy & Environmental Research.

Because of this, there’s evidence that radioactive elements have made their way into the environment, particularly though wastewater. Fracking uses a lot of water to blast underground shale rock, and the produced water that’s leftover from Marcellus Shale drilling operations contains on average nearly 500 times as much radon as the federal drinking water limit, according to the Johns Hopkins study. That water is generally injected back underground in disposal wells or stored in pits, where it can leach into the environment.

After analyzing the radon data, the study found a “statistically significant association” between how close houses are to Marcellus Shale fracking wells and how much radon is concentrated on the houses’ first floors in the summertime. This, the study said, “suggests a pathway through outdoor ambient air, but does not rule out the possibility of radon moving from the basement to the first floor.”

However, the researchers did note that their study had limitations. For one, they had “no information on radon-resistant construction, construction year, types of remediation completed, type of heating and cooking systems, quantity of natural gas and water used in the building, degree of sealing of the building for energy efficiency, soil type near the building, [or] wind speed and direction.” They also noted that it’s possible the increases could because normal levels of radon in the atmosphere are being more effectively trapped in buildings because of better wall sealing.

Still, neither the link to better construction nor the link to fracking can be definitively stated, prompting the researchers to call for more analysis on how and why radon could be affecting human health in Pennsylvania.

“Radon exposure represents a major environmental health risk, and in addition to future studies to understand the impact of drilling on radon levels, there is continuing need for a radon program in Pennsylvania to track and evaluate radon concentrations and to encourage testing and remediation,” the study said.