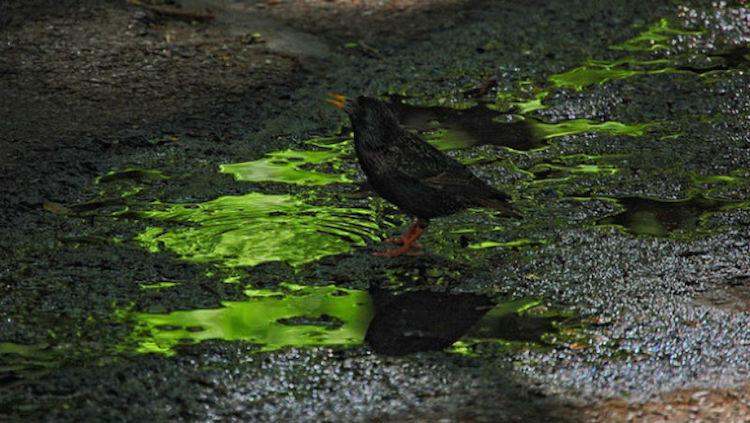 As each day passes, the case against fracking becomes more and more overwhelming.

In Pennsylvania alone, there have been over 1,400 environmental violations attributed tohydraulic fracturing, or “fracking” deep gas wells. So why aren’t government officials taking a more aggressive stance toward the fracking industry’s damning environmental health record? Answer: money and power.

The report below by Truthstream Media outlines in grave detail, that there are near invisible nuclear-based, radioactive materials incorporated into the fracking process. To release the shale gas and oil, engineers must inject millions of gallons of water and ‘frack fluid’ containing 600 chemicals – many of them toxic and some radioactive – into the ground at a high pressure in order to force natural gas to the surface. This process has been proven to contaminate well and drinking water for nearby residents in over 1,000 documented cases so far. Unearthed articles from the 1960s detail how nuclear waste was buried beneath the Earth’s surface by Halliburton & Co. for decades as a means of disposing the by-products of post-World War II atomic energy production.
Fracking is already a controversial practice on its face; allowing U.S. industries to inject slurries of toxic, potentially carcinogenic compounds deep beneath the planet’s surface — as a means of “see no evil” waste disposal — already sounds ridiculous, dangerous, and stupid anyway without even going into further detail.

Alleged fracking links to the contamination of the public water supply and critical aquifers, as well as ties to earthquake upticks near drilling locations that are otherwise not prone to seismic activity have created uproar in the years since the 2005 “Cheney loophole,” which allowed the industry to circumvent the Safe Drinking Water Act by exempting fracking fluids, thus fast tracking shale fracking as a source of cheap natural gas.

Now, it is apparent that the fracking industry is also privvy to many secrets of the nuclear energy industry, and specifically, where the bodies are buried, err… dangerous nuclear waste is buried, rather — waste that atomic researchers have otherwise found so difficult to eliminate.

Truthstream uncovered several published newspaper accounts from the Spring of 1964 concerning a then-newly disclosed plan to dump nuclear waste produced by the atomic energy industry into hydraulic fracturing (fracking) wells using a cement slurry technique developed by Halliburton & Co. The top two fracking companies in the nation at the time were Halliburton and Dowell, a subsidiary of Dow Chemical.

And here we thought fracking was a relatively new industrial phenomenon growing in popularity over just the last couple of decades. Boy were we wrong. Revealed within these articles is Halliburton’s long-standing relationship with the secret government and deep ties between the oil and nuclear industries.

Teaming up with the U.S. Government and Union Carbide Corp., who operate nuclear materials divisions at the Oak Ridge National Laboratories in Tennessee, Halliburton was then credited with “solving” the radioactive waste problem faced by America’s secretive nuclear industry. Dumping waste via fracking had apparently been going on since 1960, according to the reports, but was only made public here in 1964.

Out of Sight, Out of Mind

Each of the articles Truthstream found carry the same account under different headlines, with four of them using identical copy, and the fifth, published in the San Antonio Express, slightly rewritten based upon the same source information. The photo captions of each story also add some useful tidbits:

Report expose’s Halliburton as the architects of one of the most dangerous practices ever.

These ran in the:

The story read, in part:

“Two techniques originated by the petroleum industry for its own uses are expected to solve a major problem in the development of nuclear energy for peaceful purposes. The problem is the disposal of dangerous, sometimes deadly, radioactive waste by-products.”

“The method used at Oak Ridge begins by mixing the waste with a cement slurry, pumping the mixture down a hole drilled into the Conasuaga shale and then fracturing the shale to create a horizontal crack. The crack fills with the mixture to form a thin, horizontal sheet several hundred feet across. The mix sets to permanently hold the radioactive waste in the formation.”

“Union Carbide Corp., which operates facilities at Oak Ridge for the U.S. Atomic Energy Commission, and Halliburton, which provides specialized oil field services such as cementing fracturing worldwide, have collaborated on the project since 1960.”

The mix remained liquid for 48 hours before it was supposed to permanently set and remain there, entombed, forever.

The articles make clear that the Atomic Energy Commission was preparing to use fracking as a means of disposing of nuclear wastes at additional facilities, with Oak Ridge being simply one of the largest, and the first to publicly disclose these out-of-sight disposal procedures:

“Oak Ridge has a radioactive waste disposal problem typical of the nation’s nuclear sites. Each year about four million gallons of waste, including such fission products as strontium 90, cesium 137 and ruthenium 103, are generated at Oak Ridge.”

“Among the disposal methods already tried have been dumping concrete-encased barrels of waste in the ocean or burying the waste in lead-lined containers. These are considered either too dangerous or too expensive or both.”

Unfortunately, the ocean has been used as a giant trashcan not only by the nuclear industry, but municipal garbage and landfill companies and many other entities as well, without any real concern about its significant effects on the food supply and larger ecosystem of the planet.

“If this process is successful for disposal of Oak Ridge National Laboratory intermediate-level wastes, it has potential application at other atomic energy sites where suitable geological conditions exist,” the Atomic Energy Commission says.”

The slightly different version in the San Antonio Express News added these details:

“A couple of techniques used by oilmen when they have hopes of production may soon be used by the Atomic Energy Commission for – of all things – radioactive garbage disposal.”

“Final tests are now under way at Oak Ridge National Laboratory in Tennessee, in trying a combination of oil well cementing plus hydraulic fracturing to entomb radioactive wastes in an impermeable shale formation a thousand feet underground.”

Meanwhile, the Great Bend Tribune added information about the Halliburton executives involved in the plan in their caption for a photo which shows businessmen looking at a diagram explaining how nuclear waste like strontium 90 is mixed with cement and injected into shale formations:

The process includes remote controlled operation of the hydraulic fracturing drill in order to shield workers from the “medium level” radioactive substances being dumped into the earth’s crust, as the Warren Times Mirror in Pennsylvania notes in the caption:

How often this procedure has been used at other facilities since then is not entirely clear, though we know from reports discussed below that the practice continued and there is no indication that it ever stopped.

It discussed the ongoing and growing problems with nuclear waste, naming three principle strategies for managing the toxic stuff, summed up as “(1) delay and decay, (2) concentrate and confine and (3) dilute and disperse,” discussing how materials with lower half lives can supposedly be safely sequestered and later dumped, while other materials can be simply diluted and poured into existing groundwater supplies and systems.

The UPI story originating out of Oak Ridge states, in part,

“Since the start of the atomic era in the 1940s, nuclear reactors around the nation have produced 75 million gallons of hazardous high level radioactive waste materials.”

“And scientists here and elsewhere around the nation still are wrestling with the problems of what to do with this material, which promises to become even more plentiful as more and more commercial nuclear reactors go into power production.”

Oak Ridge proclaims that it found a solution to dealing with high level nuclear wastes, which has thus far been to keep it,

“…buried a few feet underground in storage tanks – tanks which must be periodically replaced because of the natural deterioration of the steel and other materials of which they are fabricated.”

“It is in this area of confining the high level wastes, whose radioactive half life ranges up to 30 to 50 years, that the Atomic Energy Commission is pushing dramatic new concepts.”

“One disposal system, involving materials in the medium range of radioactivity, is the hydraulic fracturing procedures. This system is now being used at Oak Ridge and involves mixing the liquid radioactive waste with concrete to form a grout which is pumped into shale formations 500 to 800 feet underground.”

Note, this article cites a shallower depth, at levels as shallow as 500 feet, after the 1964 articles claimed a further removed depth of 1,000 feet to 5,000. The even “higher level wastes” were disposed of in abandoned salt mines, according to Oak Ridge.

Nuclear Waste ‘Safely Flushed Away’ into the Water Supply

The 1969 article states that “low level waste” is “material which can safely be flushed away into rivers and lakes or released into the atmosphere because the level of radioactivity is so low that is presents no hazard when diluted and flushed into man’s natural environment. The more difficult problem is involved in the high level, liquid and solid wastes which are produced in the reprocessing of used fuel elements from nuclear reactor cores.”

The idea that the waste dumped into water supplies was so “low level” as to be completely harmless is likely dubious and hopeful at best. Fluoride, a by-product of the nuclear power industry, was one of those constituents, and was transformed from being known as a rat poison to being known as a dental benefit by the original spin doctor and propagandist, Edward Bernays.

In his book “The Fluoride Deception

,” author Christopher Bryson revealed how the nuclear industry also used fluoridation of the public water supply as a means of secretly dumping industrial waste after fluoride was a major by-product in the uranium enrichment process for building the atomic bomb. Bryson told Democracy Now:

Continue this report at Truthstream Media