Pilgrim nuclear plant says it may shut down 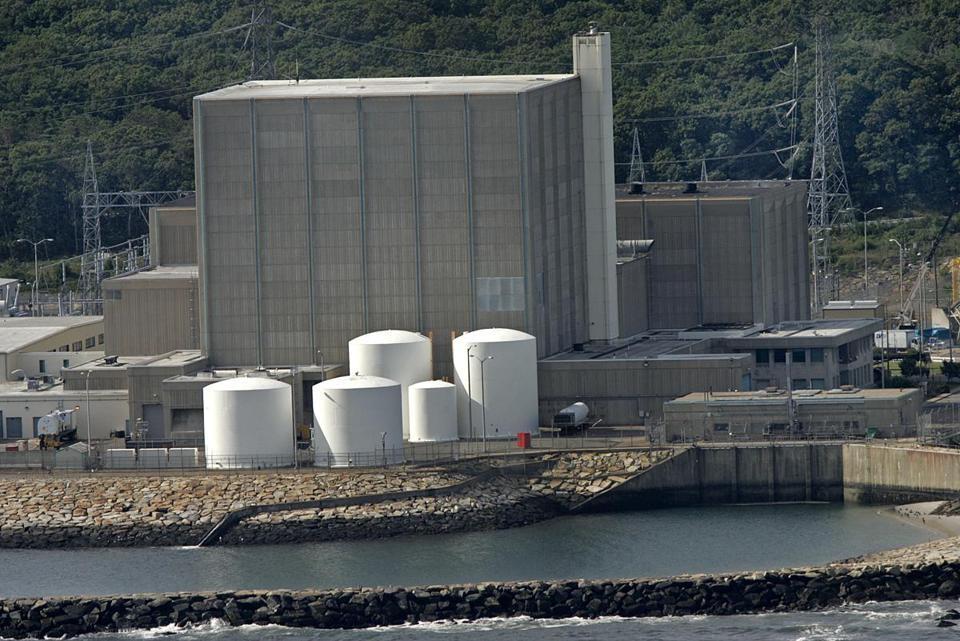 Pilgrim nuclear plant says it may shut down

Officials at the Pilgrim Nuclear Power Station are considering whether they can afford the multimillion-dollar safety improvements and other reforms required by federal officials. If not, they say, they might close the plant.

After the federal Nuclear Regulatory Commission downgraded the plant’s safety rating this month, Pilgrim joined two reactors in Arkansas as the least safe in the country. Expensive repairs are needed to raise the safety rating of the 43-year-old plant, run by Entergy Corp. since 1999.

He added: “No business decision has been made about Pilgrim. We’re looking at specific conditions, and analyzing weaknesses associated with the plant. As of right now, we don’t know the costs.”

The plant could also be shut down by the regulatory commission. A succession of unplanned shutdowns of its reactor in recent years, and inspections that revealed significant safety problems, resulted in the plant being moved to the next-to-lowest performance category two weeks ago.

None of the nation’s 99 reactors are in the lowest category, but if Pilgrim fails to comply with federal requirements, the commission will move it there. Such action would require the plant to close, at least temporarily.

The commission said the plant’s level of risk is “low to moderate.” Entergy officials said the odds of an event occurring that would damage its reactor core, before they made recent repairs, was one in every 142,857 years.

Pilgrim, which provides an average of about 12.5 percent of the state’s electricity, is located in Plymouth, 35 miles from Boston. About 5 million people live and work within a 50-mile radius of the plant.

In a recent letter to Entergy officials, Governor Charlie Baker urged Entergy to “make certain that the plant meets the highest safety standards.”

“We cannot risk the well-being of the residents of the Commonwealth,” Baker wrote.

Baker added that he was troubled that Entergy “has failed to take appropriate corrective actions to address the causes of several unplanned shutdowns dating back to 2013.”

Baker has said he sees Pilgrim as part of a “balanced approach” to the state’s energy needs, while other state lawmakers have long called for the plant to be closed.

Entergy was awarded a 20-year operating license in 2012 to continue operating Pilgrim, but opponents are hoping to use the downgrade to pressure the company to shutter the plant now. On Wednesday, state Senator Dan Wolf, a Harwich Democrat, met with advocates from the Sierra Club, the Environmental League of Massachusetts, the Massachusetts Public Interest Research Group, and others.

They discussed how to advance bills in the Legislature that require the company to pay fees to store its spent nuclear fuels at Pilgrim, and that would force Entergy to show that it has enough money to cover the costs of securing its spent fuel after the plant closes.

“These bills will get across to Entergy that they need to bake these costs into running the plant and think of its financial viability,” Wolf said. “They’re going to have to make financial decisions.”

Entergy officials declined to provide information about the plant’s operating costs or revenue. Although the company’s stock price has plummeted by nearly 30 percent this year, nuclear regulatory officials have maintained that Entergy is solvent.

In a letter sent this summer to an environmental group in New York, William Dean, director of the NRC’s Office of Nuclear Reactor Regulation, wrote that Entergy’s “current financial qualifications are adequate to continue safe operation at Pilgrim.”

In response to questions from the Globe about the company’s finances, Lauren Burm, an Entergy spokeswoman, wrote: “Entergy does not disclose in our investor relations or Securities and Exchange Commission filings, individual plant profit, or operating cost information. It is considered proprietary business information.”

Entergy officials have six months to present the NRC with a detailed improvement plan. Commission officials will then send teams of inspectors to the plant to review the causes of the unplanned shutdowns over the past three years and to determine whether equipment needs to be replaced and whether the plant’s management needs to improve safety.

The commission bills Entergy for the inspections, which federal officials estimate will cost nearly $2 million. Entergy officials said they have already spent about $70 million to provide safety and security upgrades to the plant since the 2011 radiation leak at Japan’s Fukushima nuclear station, which has the same basic design as Pilgrim.

“We have a number of actions already ongoing to address performance gaps identified,” Noyes said. “We have existing action plans and we plan to execute those.”

State energy officials declined interview requests about how Massachusetts would make up for the lost power if Pilgrim closes.

If a closure were to happen soon, it would come as the state has made drastic cuts to its reliance on coal. Last year, the Mt. Tom power plant in Holyoke became the last of the state’s three coal plants to schedule a permanent shutdown. The Salem Harbor Power Station closed last year, while Brayton Point in Somerset is scheduled to stop operating in 2017.

The state now gets about 58 percent of its energy from natural gas, while oil supplies about 9 percent, coal about 3 percent, and renewable energy about 2 percent. The rest comes from hydroelectric power and other sources. The state would probably have to import more natural gas, which would have an impact on its carbon emissions. Nuclear power doesn’t emit carbon.

“The administration continues to engage with the Legislature on Massachusetts’ energy needs and is committed to addressing the impact of power plant retirements on energy markets,” Katie Gronendyke, a spokeswoman for the state Executive Office of Energy and Environmental Affairs, said in a statement.