Migrants stranded as Hungary bars them from rail station 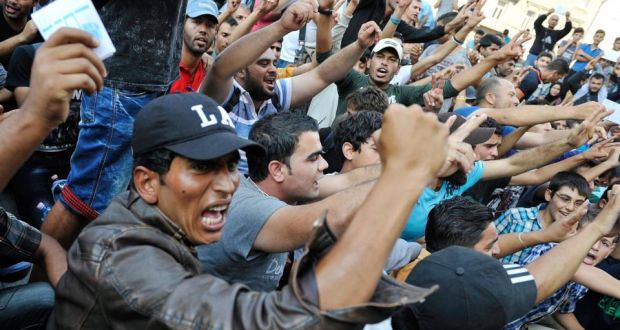 Migrants stranded as Hungary bars them from rail station

Hundreds of migrants are stranded outside a major railway station in the Hungarian capital, Budapest, after police sealed off the terminal to stop them travelling through the EU.

Thousands of people, many fleeing war and persecution, are trying to reach northern Europe to claim asylum.

EU states are engaged in a flurry of diplomatic activity to find a solution.

The crisis has highlighted the limitations of the EU’s system for coping with refugees, the BBC’s Chris Morris says.

Under an EU rule known as the Dublin Regulation, refugees should seek asylum in the first EU country they enter. But with countries such as Italy and Greece saying they cannot cope with the numbers, many have headed north.

Hungary had earlier appeared to abandon efforts to register migrants, allowing huge numbers to board trains at Keleti station in east Budapest and travel to Vienna and southern Germany on Monday.

The European Union is supposed to have a common asylum system but at the moment it’s not worth much more than the paper it’s written on.

Many of the migrants currently trying to reach Germany via Hungary probably arrived first in Greece. But they left the EU to travel through Macedonia and Serbia before crossing back into Hungary. Now the Hungarian government says it is trying to apply EU law, but it clearly doesn’t want them to stay.

In other words the system is close to breaking point and needs reform. Most of the ideas being discussed at the moment – a fairer distribution of asylum seekers around Europe, much more help for Greece and Italy to register arriving migrants, and more effective action to send failed asylum seekers home – have already been approved by EU leaders.

But much of this emerging policy has yet to be put into practice, and new rules are rapidly being overtaken by events.

But police evacuated the station on Tuesday, leaving about 1,000 migrants outside.

The station later allowed non-migrant passengers to enter via a side entrance, but lines of police kept migrants out.

The migrants who risk everything for a better life

This West African entered the Spanish territory of Ceuta from Morocco curled up next to a car engine. Read the full story here.

Many protesters in Budapest complained that they had paid hundreds of euros for tickets to Austria or Germany.

One 20-year-old woman from Aleppo, Syria, named only as Marah, said her family had bought six tickets for a train to Vienna.

“They should find a solution,” she told Reuters news agency. “We are thousands here, where should we go?”

About 3,650 migrants arrived in Vienna by train on Monday, many intending to carry on to Germany.

German police said 3,500 asylum-seekers had arrived in Bavaria on Tuesday while Belgium and Sweden also reported a surge in migrant numbers.

Hungarian Foreign Minister Peter Szijjarto told reporters on Tuesday that Hungary would now register all migrants and send those it considered to be economic migrants back to the state from which they entered the country.

Prime Minister Viktor Orban is due to meet senior EU officials on Thursday in Brussels to discuss the crisis.

The number of migrants entering Europe has reached record levels, with 107,500 arriving in July alone.

German Labour Minister Andrea Nahles said the influx meant between 240,000 and 460,000 more people could be entitled to social benefits next year, costing the state billions of euros.

Why is EU struggling with migrants and asylum?

The German government has already said it will allow Syrians arriving from other EU states to apply for asylum. But on Tuesday, a spokesman said the Dublin Regulation had not been suspended.

“Dublin rules are still valid and we expect European member states to stick to them,” an interior ministry spokesman said.

“They know Syrians get the right to asylum in the European Union,” Frontex chief Fabrice Leggeri told French radio.

The risks for migrants travelling through Europe were highlighted last week by the deaths of 71 people found in a lorry that had travelled to Austria from Budapest.

Most of the dead were thought to be Syrians.

Hundreds more people drowned in the Mediterranean last week while trying to reach Europe from Libya.

10 days of the migrant crisis