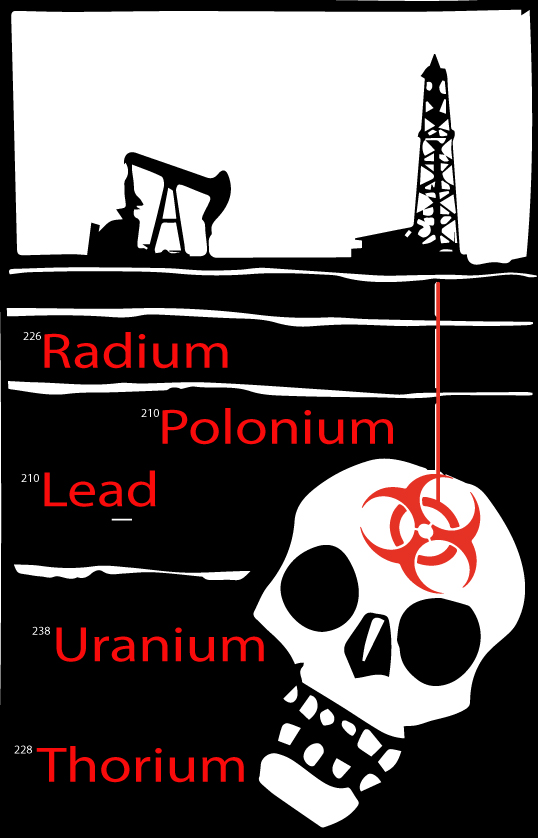 The EPA openly acknowledges that fracking fluid contains “thousands of chemicals,” but nowhere is there mention of radioactivity. Now, a new study reveals the “natural gas” industry may be hiding a secret as dark and deadly as the one the nuclear industry has been trying to conceal for decades.

With recent news that California’s fracking industry will be “repurposing” its toxic wastewater to meet the needs of an agricultural industry driven desperate by the drought, a timely new study published in Environmental Health Perspectives reveals fracking wastewater is not just a source of dangerous petrochemicals but also a highly toxic form of radioactive waste.

Titled, “What’s NORMal for Fracking? Estimating Total Radioactivity of Produced Fluids,” the new study tested the hypothesis that fracking wastewater contains the same naturally occurring radioactive material (NORM) found in the shale deposits that it is produced from as a drilling byproduct. The primary radionuclides of interest include 226radium, 210polonium, and 210lead, which are decay products of 238uranium and 228thorium, and which are normally safely locked away deep within millions of years old geological formations.

The study focused on the heavily drilled Marcellus Shale, a vast swath of marine sedimentary rock found in eastern North America, and which is known to have about 20 times higher levels of radioactivity from high uranium content compared to most other shales.1  In 2010, the uranium deposits within the Marcellus Shale were identified by University of Buffalo researchers as being susceptible to being solubilized and made mobile by fracking fluids. The researchers determined that when these fluids inevitably come back to the surface in the form of millions of gallons of wastewater they can pollute streams and the ecosystem with hazardous waste.

Fracking Releases Radioactivity Normally Locked Away Deep Within The Earth

The new study confirms the above mentioned concern. Researchers at the University of Iowa obtained a 200-liter drum of fracking wastewater obtained from the Marcellus Shale region in 2012. The sample was measured for existing levels of radioisotopes, and then estimates were made for the total radioactivity that would be produced within the fluids in the future if left within a closed space. They confirmed the presence of radioactive radium, polonium, and lead. They also measured an increase in the decay products 210 lead and 228 thorium.  Finally, they determined that the radioactivity would continue to increase for more than 100 years due to the formation of the decay products of 210 lead and 210 polonium.

This is not the first time that a radioactivity problem with fracking wastewater has been cited in the published literature. For instance, a report published in Environmental Science and Technology in 2013 found that fracking wastewater discharge by the Josephine Brine Treatment Facility in Pennsylvania lead to 226 radium concentrations that were approximately 200 times higher than normally expected in stream sediments near the facility.2

Clearly, the “natural gas” industry has a new PR nightmare on its hands. There is now growing public awareness that fracking is an extremely destructive and non-sustainable method to extract energy from the earth, uses and contaminates billions of gallons of water annually, and may even contribute to increase seismic events like earthquakes. But until now few if any realized that the fracking/natural gas and the nuclear industry share the same dark secret that they both routinely release massive quantities of radioactive waste into the environment whose toxicological implications last for centuries, if not for thousands of years. The nuclear power industry releases highly carcinogenic plumes of radioisotopes into the environment during the course of normal operations. For instance, they routinely schedule government approved releases of up to 500 times higher than normal levels when they refuel their reactors. Even the coal-powered power plants produce millions of tons of radioactive waste, which we recently touched upon in our expose on the possible use of coal fly ash for covert geoengineering programs in the U.S. and abroad. In many ways, as evidenced by the Fukushima multi-core meltdown, the problem with radioactive waste contamination is so profound and widespread that it appears the media wont’ even touch the issue. To the contrary, nuclear power is often described in the mainstream media as a “cleaner” form of energy because it does not produce the same carbon emissions as fossil fuel-based forms. This suffices to distract from its true harm to human and environmental health.

Given the widespread problem of denial, it is not surprising that present day fracking regulations do not account for radioactivity at all. The EPA, in fact, focuses on drinking water and groundwater contamination by the admittedly “thousands of chemicals contained in fracking fluid” as the most salient issue, and determined in its 2015 fracking risk assessment that while it did find evidence that fracking has caused contamination and does pose a risk to drinking water resources, “the number of identified cases where drinking water resources were impacted are small relative to the number of hydraulically fractured wells.”3

The truth is that low-dose radioisotope exposure no matter what the specific source of contamination has been proven to be several orders of magnitude more dangerous to health than present day radiological risk assessment standards presently specify. This is because health risk evaluations are based on gamma-radiation associated effects, based on observations in atomic bomb blast survivors from WWII, long before DNA was even discovered. Uranium, however, being an alpha particle and not a gamma radiation emitter, and in the case of depleted uranium (which has a lower content of fissile isotope 235 than natural uranium) can have up to 1 million fold increased toxicity to DNA than would be expected by its radiolytic decay alone. The implications of this are astounding, and speak to just how dangerous releases of radioisotopes are when looked at through the lens of a more nuanced, modernized, and evidence-based risk assessment lens.

The truth about low-dose radioisotope exposure’s true risks have been hidden for quite some time, including by the tobacco industry, who knew as far back as the 1950’s that the contamination of tobacco with polonium was driving high lung cancer incidence in smokers but refused to admit it because addressing the problem by removing 210polonium would have reduced their product’s nicotine content, addictiveness, and therefore profitability.

This new study should help to bring to the awareness of the public that there is nothing natural about the “natural gas” industry, and that fracking may combine the worst outcomes of both the fossil fuel (petrochemical) and nuclear power industries, as far as the ultimate forms of damage wrought upon human and environmental health. Now that the wastewater from fracking is being used to grow food, it is all the more pressing that we become engaged and active on the issue — that is, unless we don’t mind being force fed fracking chemicals and radioactive material in our produce in the near future. The time has come to take a stand and withdrawal all support from energy and agricultural production models that result in the atrocious toxic fallout of this kind.

To get more involved on the issue check out Americans Against Fracking.