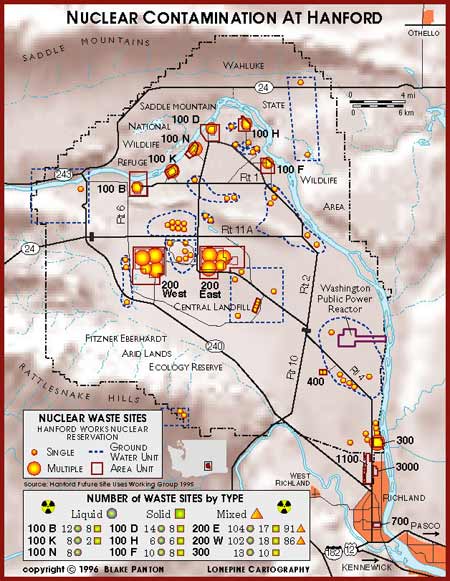 The first lawsuit was filed on Tuesday by the Hanford Challenge advocacy group and the UA Local 598 union, whose members work at Hanford. It alleges that the US Energy Department and the Washington River Protection Services (WRPS) – the private contractor that manages the storage tanks holding millions of gallons of nuclear waste – failed in its responsibility to keep workers safe.

“We have had enough. For years, our members have been exposed and sickened, and Hanford management has denied ever exposing anybody,” said Pete Nicacio, a business manager for UA Local 598, in a statement about the lawsuit.

The second lawsuit, filed in federal district court by the state attorney general against the same defendants, alleges that “the health and safety of state citizens and residents working at the Hanford site are threatened by Defendants’ storage, handling, and treatment of hazardous and mixed hazardous wastes in violation of (federal law) and the state Hazardous Waste Management Act,” according to Washington state Attorney General Bob Ferguson.

A KING 5 local news investigation found that workers in 50 separate incidents were exposed to vapors leaking from the nuclear waste tanks between January 2014 and April 2015. In one of the incidents, a worker was treated for chemical pneumonitis, an inflammation of the lungs caused by chemical exposure.

The Hanford site stores approximately 53 million gallons of high-level radioactive hazardous waste in tanks, equivalent to what can be held in 2,650 rail cars, according the Washington State Department of Ecology.

The attorney general’s lawsuit says that exposure to the gases – which can include hydrogen, ammonia, mercury or benzene, among others – can cause adverse health effects such as “asthma, chronic obstructive pulmonary disease, central nervous system suppression…and cancers of the liver, lung, blood and other organ systems.”

“Energy [Dept.] has known about the problem of worker vapor exposures since the late 1980s,” wrote Ferguson in the complaint.

Hanford, located in the southeast of Washington state, has the dubious nomenclature of “most contaminated nuclear site in the US.” It is where the federal government produced plutonium for the country’s nuclear weapons program from 1943 to 1987. It’s also where the plutonium was made for the Fat Man, the five-ton atomic bomb dropped on the civilians of Nagasaki on August 6, 1945.

Since production ended, the Energy Department has been tasked with cleaning up the waste left behind. Much of the waste remains at the Hanford facility that covers 586 square miles.

The federal government was warned by the state of Washington on November 19, 2014, that a lawsuit could be filed if improvements were not made to the satisfaction of the state.

In June, the attorney general said he would oppose an Energy Department request to have more time to empty the next group of tanks storing waste at Hanford. Federal officials wanted a one-year extension on its deadline to retrieve radioactive waste from leak-prone tanks, which would give them until fall 2023 to complete the work.

This is the first time in state history that Washington has filed a suit against the federal government on behalf of the workforce at Hanford.