COLOR REVOLUTIONS: How the Anglo-American Axis Threatens The BRICS Nations 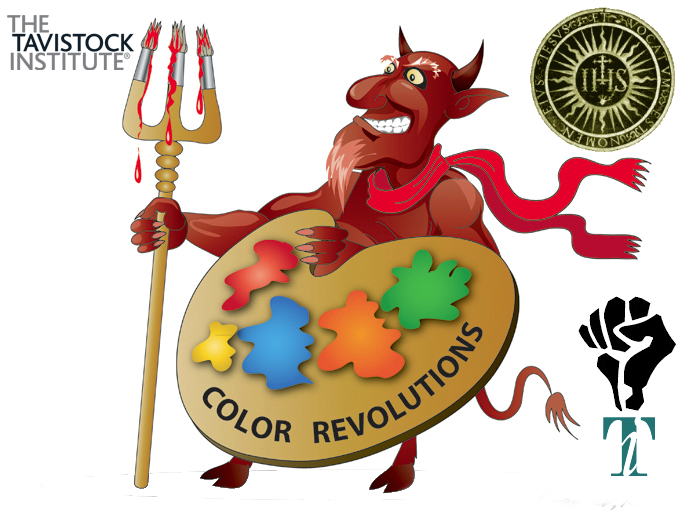 The Geography Of Color Revolutionary Threats To The BRICS Countries

One of the hottest topics of strategic research here in Russia has been the study of how the US uses Color Revolutions as a new form of influence and power projection. Because this destabilizing template can be applied all over the world, and not just against Russian interests, I wanted to share some of my latest findings with you all, in the hopes that you and your countries can better recognize the threat that this poses and adequately prepare for defending yourself and your regional allies from it.

I’ll start by informing you of the strategic weaponization of Color Revolutions, and then explain their forecasted geopolitical application in destabilizing each of the BRICS states and their regional allies. Afterwards I’d be more than happy to answer any questions or speak with people to offer more specific insight.

So to begin, the reality of Color Revolutions might not be what many of you think they are, and it’s necessary to reconceptualize them so that we’re all on the same page here. They aren’t spontaneous social phenomenon, like the Western mainstream media presents them as, but rather military-strategic plans for destabilizing a targeted geopolitical area. I talk about this more in my upcoming book, Hybrid Wars, which will be available for free in print and online from the People’s Friendship University of Russia, but in brief, here’s how it works. Preplanned destabilizing forces, a combination of foreign citizens and domestic so-called ‘opposition’, even if they are not officially affiliated with a political party, either hijack legitimate protests or engineer their own conditions for one and then provoke the government into responding with force. The goal is to delegitimize the state domestically and internationally, and weaken it to the point where an urban guerrilla offensive eventually topples it. Even if it fails to overthrow the authorities, the resultant destabilization spreads throughout the region and creates a favorable strategic environment for US foreign policy, such as a pretext for regional military deployment. There are also scenarios where it can be used to create a secessionist movement within the targeted state, in which case it markets itself to certain ethnic, religious, or regional groups in order to gain supposed ‘legitimacy’.

It’s a bit deeper than that, but this is the main gist. I’ll now outline the geopolitical aspects of Color Revolution strategy against the BRICS. The idea to keep in mind is that Color Revolutions aren’t spontaneous, but are engineered destabilization movements with concrete geopolitical goals. Let’s start with Russia.

I’ve identified something that I call the ‘Color Arc’. Stretching from Hungary all the way to Kyrgyzstan, it’s a continuous line of states whose political destabilization or illegal change of government could seriously jeopardize Russian interests and external security. Hungary, Serbia, Macedonia, and Greece are targeted because of their potential pipeline cooperation with Russia, while Turkey and Iran are in the US’ sights because new governments there might potentially be anti-Russian and direct their spheres of influence north towards Russia’s traditional area of interest. A Great Power clash between Russia and Turkey or Iran, or at least an unfriendly competition, would definitely be to the US’ ultimate benefit. Finally, in Armenia, Turkmenistan, Uzbekistan, and Kyrgyzstan, unrest in those countries could lead to civil or international wars that might drag in Russia. I’ve sketched out the most probable scenarios for each of their destabilizations and can gladly discuss them afterwards if anyone was interested.

Now let’s move on to China, which faces internal and external Color Revolution threats. The ones inside the country are Hong Kong, Xinjiang, and Tibet, and it’s always been one of the US’ top strategic goals to coordinate these destabilizations so that they can break out simultaneously and throw Beijing off balance. One of my research interests is currently whether or not such a scenario could ever happen in parts of Inner Mongolia after a Mongolian Color Revolution, and I’m also looking at the possibility of ASEAN destabilization, particularly in Myanmar, affecting Yunnan Province. That brings me to China’s other external Color Revolution risk. If Kyrgyzstan descends into chaos, then it, or particularly the southern part of the country, could become a base for Uighur terrorists. An illegal regime change in Mongolia or the creation of de-facto sub-states in Myanmar could also spread unrest and create opportunities for the advancement of US foreign policy and the containment of China.

Moving over to India, there aren’t really any external Color Revolution risks because of the neighboring political geography. Illegal regime changes in the area wouldn’t really change India’s current regional position or impact that forcefully on its domestic stability. A Color Revolution in Pakistan, even though it’s unlikely to succeed, could intensify bilateral tensions if the country falls into chaos. The real Color Revolution threat against India, however, lies inside the country itself. Although engineered uprisings are certainly possible in the major cities, they’d be most devastating in the Northeast States, or the ‘Seven Sisters’, as they’re called. If they present themselves as so-called ‘peaceful, self-deterministic, ethnic-affiliated movements’, then they could potentially get a lot of appeal from certain segments of the population, especially youth. An escalation of civil war in Myanmar could exacerbate this risk. The US might look into this scenario, which I’m also currently studying, as a means of punishing India for any further multipolar outreaches to Russia and the establishment of its own civilizational pole of influence outside of Washington’s control. This region is the most vulnerable to external destabilization, so if the US would deploy this strategy against India, it’s sure to start there.

Now let’s look at South Africa. The country would be most destabilized by a breakdown of law and order in Zimbabwe, which could predictably be ushered in with a Color Revolution. We’ve already witnessed how the country has been able to weather a tough economic situation, so the supposedly plausible grounds for a Color Revolution based on those factors aren’t sufficient to bring people to the streets. More than likely, it would be the passing of Robert Mugabe that would trigger the event. There’s also of course the strategic threat that Color Revolutions in Lesotho or Swaziland would have on South Africa, since they may lead to such destabilization, intense violence and uncontrollable refugee flows even, in those states that a military intervention might be forced upon Pretoria. Another risk that South Africa faces when it comes to Color Revolutions is if one broke out in Mozambique. The country has the potential to provide a lot of hydrocarbons to South Africa, so a change in leadership might compel a pro-American government to weaponize this in destabilizing its neighbor. Also, if engineered anti-migrant violence repeats in South Africa, then the counter-response in Mozambique might resemble a Color Revolution, where people agitate to press their government for a response, which might force it to use energy as a weapon as a form of ‘mob-inspired justice’, which in reality would be American-guided.

Last but not least, there’s Brazil. Externally, Mercosur is in a continental competition against the Pacific Alliance, a neo-liberal trading group largely aligned with American economic interests. I wrote last year about how the Alliance wants to poach Paraguay into its camp, but the greatest opportunity for this to happen is if Bolivia goes first. Evo Morales is very popular, but the US has played with the idea of an indigenous Color Revolution against him. If such a destabilization succeeds and the post-coup government takes the country away from its plans of Mercosur integration and into the Pacific Alliance, than more than likely Paraguay’s government would follow. This economic secessionism, if you will, could lead to the entire unravelling of the economic bloc and would dramatically harm Brazil’s interests. Peru, although it’s part of the Pacific Alliance, is susceptible to a Color Revolution hybrid war centered on indigenous rights. This is because the country is cooperating with Brazil and China in the Twin Ocean Railroad plan, which brings me to speak about Brazil’s domestic vulnerabilities. The ‘cashmere revolution’, as The Economic called it in October, tried to throw the elections against President Rousseff, and although it narrowly failed, it can always come back. In fact, the US could even energize it by assembling a loose anti-government coalition of indigenous people, environmentalists, and opposition members in going against the Twin Ocean Railroad. Importantly, the proposed path also cuts directly through territory that the opposition mostly won in the last election, so it’s a distinct possibility that must be considered.

To wrap everything up, I want to emphasize that the strategic-tactical application of Color Revolutions as a geopolitical tool of American foreign policy is largely the result of reverse engineering. They don’t always find a convenient social situation and exploit it because they’re capable of creating their own in certain areas where it would be most effective to have one break out. In preparing for a Color Revolution in your own country or region, some basic questions to ask yourselves are these:

1) The destabilization of, or regime change in, which of your neighbors would harm your country’s interests the most?

2) How can external non-state forces interfere in the relationship between your country and its neighbors?

3) How susceptible are you and your neighbors to Color Revolution scenarios and destabilizing political technologies, be they nationwide or in key regions?

4) and finally, what regional mechanisms can be harnessed to ensure social stability and actively prevent these scenarios? How do your country and its allies respond once these events are set in motion?

If you keep these considerations in mind, it’ll be easier to predict where and when a Color Revolution attempt could pop up, as well as brainstorm effective ways of responding to one in advance of the crisis itself. Also remember that there is a distinction between legitimate protests and Color Revolutions, but the US is dangerously blurring the line between the two in order to hide its strategic intent and gain a certain plausible deniability over its involvement. When foreign NGOs and internationally affiliated opposition members are involved, that’s usually a red flag, as well as statements in support of the movement from the US State Department or local American embassy. If a protest seems to support American strategic interests, more often than not, it actually does, and the US has some kind of direct or indirect role in bringing it about, even if 9 out of 10 of the participants don’t realize this. Always be alert, and if you keep in mind that the US has weaponized Color Revolutions and engineers them for geopolitical purposes, then you’ll be more fully prepared to counter this new type of weapon