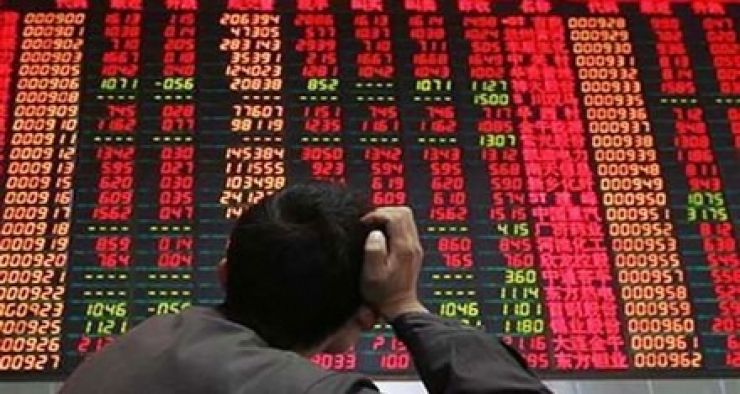 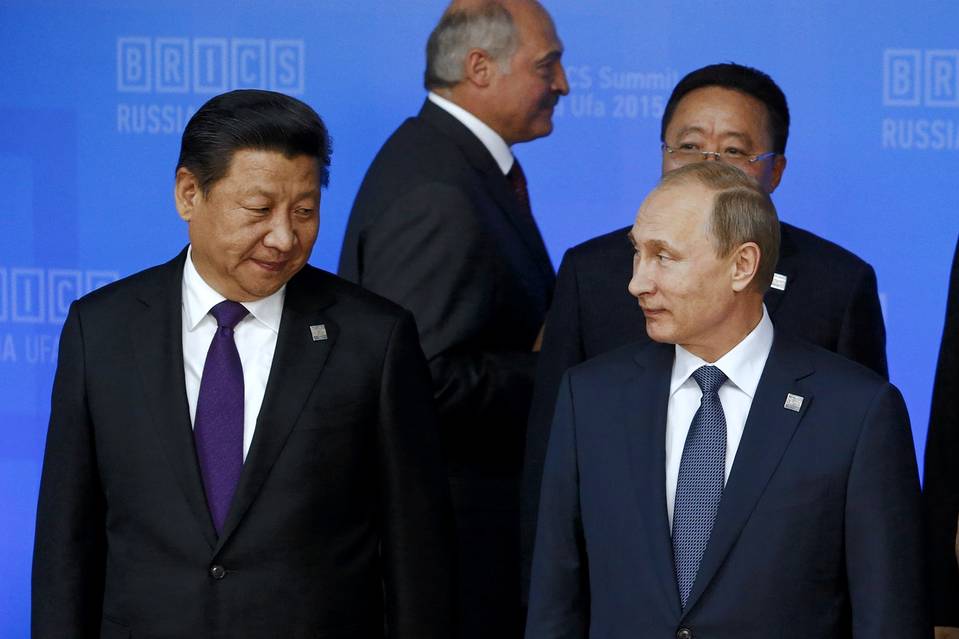 By Mark Magnier and Jeremy Page
The Wall Street Journal

BEIJING—President Xi Jinping got the credit as China’s stock markets revved up. Now their unraveling is inviting rare finger-pointing at his forceful rule and putting his far-reaching economic goals at risk.

Vibrant stock markets are at the center of Mr. Xi’s plans for an economic makeover, intended to help companies offload huge debts, reinvigorate state enterprises and entice more foreign investment. Some economists called reviving the moribund markets among his most consequential reforms in the more than two years since coming to power. Investors talked of “the Uncle Xi bull market.”

But with the markets having lost around a third of their value in the past month, and the government appearing to panic in its response to the drop, some people are starting to voice doubts about Mr. Xi’s autocratic leadership style.

Sun Liping, a sociologist at Tsinghua University, took to his social-media account to say the stock-market crash has exposed crucial flaws in Mr. Xi’s highly centralized approach to government, including a lack of financial expertise and a pervasive instinct among subordinates to obey superiors.

“Power has limits,” he wrote.

Mr. Xi, who arrived in Russia on Wednesday for a summit, hasn’t commented publicly on the market moves or the criticism.

The criticism amounts to a rare backlash for a leader with an eye for publicity and who so commandingly put his stamp on the Communist Party, the military, economic policy and other areas. At the same time, Mr. Xi is facing resistance from officials and the business community upset with the slowing economy and how he has tried to concentrate power in his hands, among other policies.

Although Mr. Xi faces no immediate challenge to his authority, there is a risk that the stock market crisis could trigger social unrest and hamper his efforts to promote key allies at the next big leadership reshuffle in 2017. His government has placed a priority on quashing dissent and unrest, and recently passed a law that broadly defines national security threats to preserve the party’s leadership. 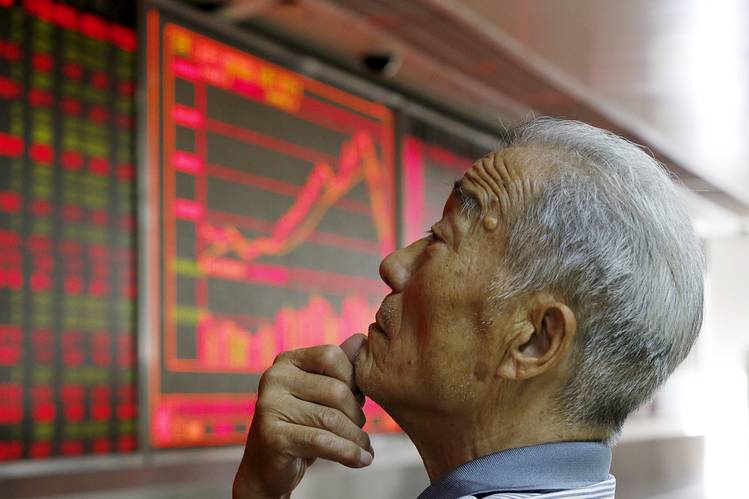 “The market selloff is definitely the largest challenge that the new administration has faced,” said Victor Shih, a China expert at the University of California, San Diego. Chief among the weaknesses exposed, Mr. Shih said, was the ineffectiveness of Mr. Xi’s pledge to limit bureaucratic interference and give markets greater scope.

“He’s trumpeted reform for the past couple of years but a lot of so-called reforms have gone out the window with this dramatic…government intervention in recent days,” Mr. Shih said.

The government’s scattershot efforts, which have included cutting interest rates and ordering state-run companies and brokerages to buy and hold stocks, appeared to make headway Thursday after floundering for weeks. The benchmark Shanghai Composite Index rose 5.8%, the biggest daily gain in six years, while other indexes saw smaller rises. On Thursday, Chinese police visited the nation’s stock regulator and vowed to investigate any market manipulation. 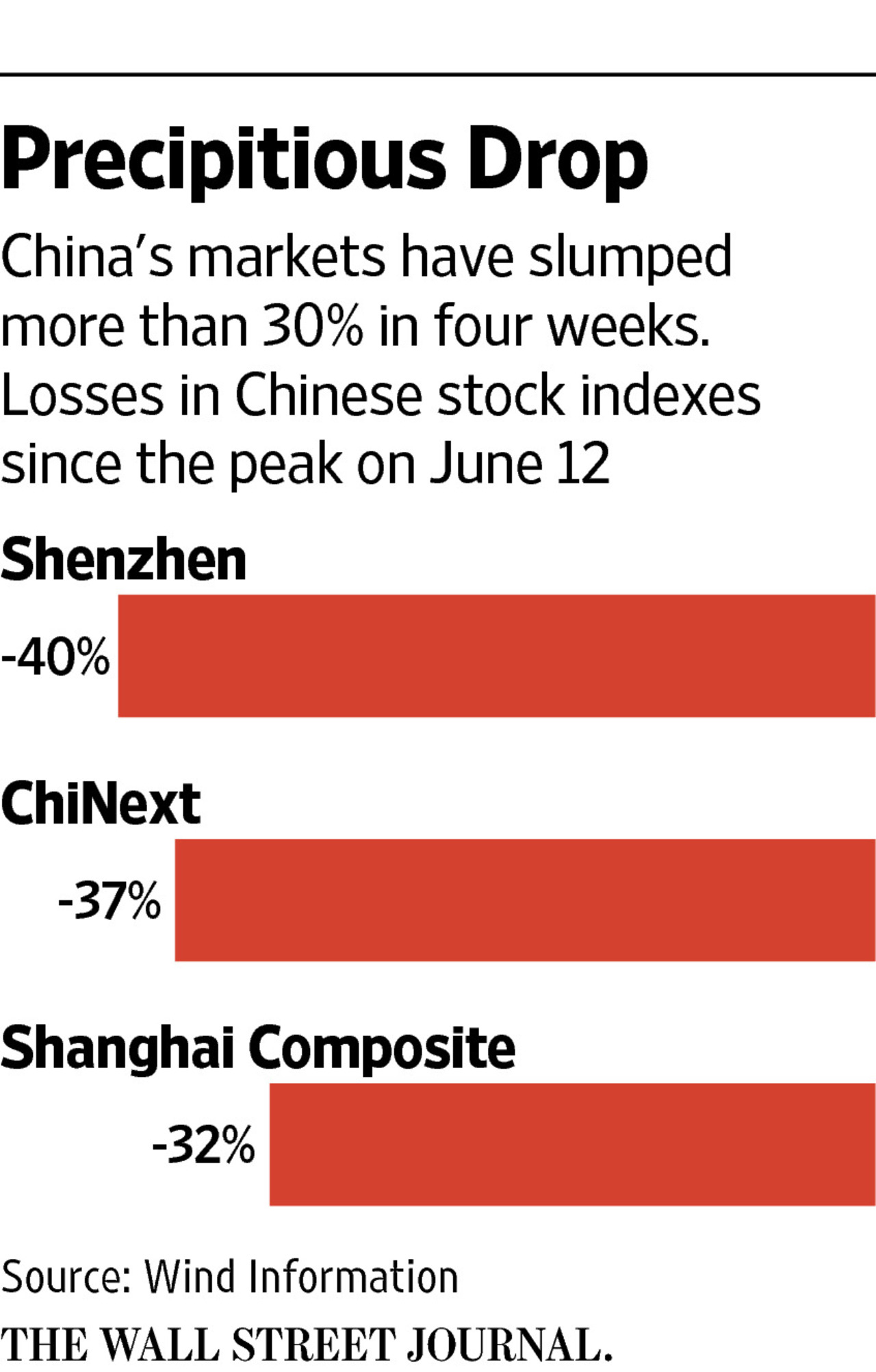 Just how damaging the stock meltdown ends up being for Mr. Xi will depend on how quickly the market recovers and whether Beijing summons the unity to marshal its significant resources. The administration still has some $4 trillion in foreign reserves, and its policies to promote innovation and entrepreneurship offers a road map out of the slow-growth morass for many ordinary Chinese, said Cheng Li, a senior fellow with the Brookings Institution and author of a book on Chinese leadership.

“This is a very critical period, a test of public confidence, leadership capacity and how the international community views China,” Mr. Li said. “This week is pretty bad and if it lasts a few more weeks, it will be terrible, but we need to see how it unfolds.”

Mr. Xi took charge in late 2012, presiding over a group of leaders and senior officials applauded by China’s elite for wanting to shake things up. His central-bank governor and finance minister have argued for relying more on market forces and loosening controls on currency and cross-border investments.

A potential casualty of the concerted intervention, some economists said, is Beijing’s goal of getting the yuan named as a global reserve currency when the IMF conducts a review late this year. The effort relies on opening financial markets wider to foreign investors, whose confidence in the wake of the massive stock-market intervention has yet to be gauged.

One of Mr. Xi’s most popular policies, an anticorruption campaign against party officials high and low, has also run into headwinds. Businesses and even other Chinese leaders complain that the purge is paralyzing the bureaucracy, frustrating companies trying to gain approvals for projects. It has also antagonized some senior party figures who feel it is splitting their ranks and distracting the leadership’s attention from the economy.

That is why, some political insiders said, that the trial of Zhou Yongkang, the former security chief and most senior figure caught in the antigraft campaign, was held in secret and given little play in state media at its conclusion.

The Chinese stock market behaves differently from most other big markets in the world in normal times. During a big selloff, things can get really weird. Photo: Getty Images.

Also battling from within are influential state industries that dominate large swaths of the economy and which have managed to delay the government from issuing broad guidelines for consolidation. Much of that reform program is premised on selling more shares to the public and converting corporate debt to equity, reforms that economists said are being set back by the efforts to stabilize the markets.

Some economists said driving Beijing’s aggressive prop-up of the markets is fear of contagion and social instability as accounts fueled by debt started to rapidly lose value. Many of those hit hardest in the past few weeks have been individual investors with relatively small accounts—the majority of Chinese investors—some of whom have bought stocks on margin or with proceeds from real estate, another area hard hit by the economic slowdown. A 26-year-old graduate student at Peking University who would give only his surname, Zhou, said he has lost around 50,000 yuan [$8,050] on stocks in the past few weeks, leaving him depressed and scrimping on meals. Mr. Zhou said he blames the steep decline on the government, which did little to temper frenzied buying, and on state media for playing cheerleader.

“The People’s Daily made things worse by saying that the 4,000 level was just the beginning of the bull market,” Mr. Zhou said. “50,000 yuan is a big deal for a student. Some of this was money my parents gave me for my wedding.” On Thursday, the Shanghai market closed at 3709.33.