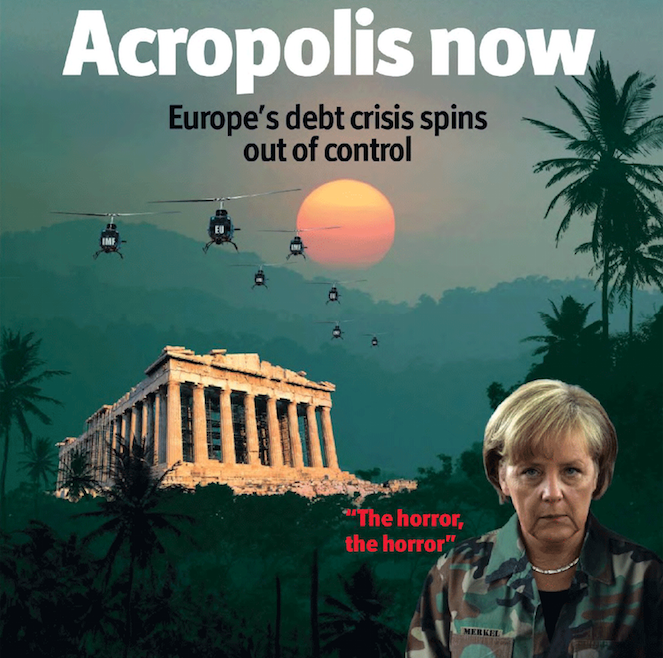 The European Union Was Destined
To Fail From The Very Start

Greek Crisis Was Engineered From Both Above And Below 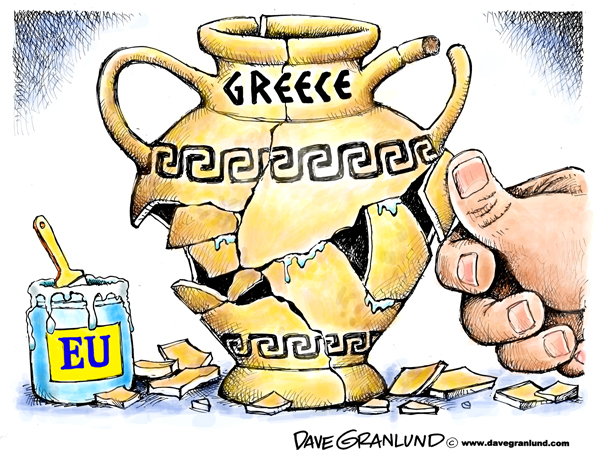 Just as Anglo-American predatory capitalism was fatally flawed with the inaugural incorporation of the East India Company  in 1600, so too was the original design of the European Union.  The East India Company (EIC) was incorporated in order to somehow ‘legitimize’ the pillaging, plundering and raping of India, which was then followed by the same in China.  The EIC even conscripted its own private army throughout Great Britain which would first be deployed in India.

From 1700 onwards and for the next 160 years or so, the Honourable East India Company raised its own armed forces. The three administrative areas of India, the Presidencies of Bombay, Madras and Bengal, each maintained their own army with its own commander-in-chief.

The commander-in-chief of Bengal was regarded as the senior officer of the three. These armies were paid for entirely out of the East India Company’s Indian revenues and together were larger than the British Army itself.
(Source: PRIVATE ARMY OF THE HONOURABLE EAST INDIA COMPANY [HEIC]

Fast forward to 2015 and it’s now clear that the U.S Armed Forces operate in the very same capacity as the EIC’s private army.  The U.S. Military merely carries out the wishes of Corporate America at every turn.  The entire planetary landscape is replete with the destruction of war waged for purely economic interests and financial purposes.  Anglo-American corporations have always operated with the MO that is best known as disaster capitalism. In other words if the targeted country does not properly heed the gunboat diplomacy of the U.S. State Department or U.K. Foreign and Commonwealth Office, the U.S. Marine Corps or Royal Navy is not far behind.

The European Union was conceived as a 3rd millennium version of the USA.  It was meant to be the world’s largest economic powerhouse whose collective militaries could be sent wherever corporate interests were under threat.  Or, wherever the EU wanted to steal land and water bodies, oil and gas reserves, gold and diamond mines, and other natural resources.

From the very beginning the European Union was nothing more than a totalitarian superstructure contrived to control the Continent and beyond. It was essentially a command and control matrix which functions as a military organization with its top-down pyramidal hierarchy. Commands are issued from the EU headquarters in Brussels — the ostensible peak of the pyramid — and the Eurozone nations below are expected to follow those orders.

However, things have gotten off to a really bad start.  With the stock market crash of 2008 and global recession that followed, the infrastructure of the EU started to reveal its intrinsic deficiencies.  So much was wrong with the financial architecture and economic order that it only took a Europe-wide recession to lay bare the cracks in the foundation. Even a map of the Europe Union shows how Greece was always the Achilles’ heel.

With Spain as the head, Italy as the arm and the Scandinavian countries as the tail, Greece geographically is located as the foot of European Union BEAST.  Truly, it was created as a political, economic and military BEAST, where the people of Europe have virtually no say, even being denied national referendums about joining the EU. The European Commission in Brussels operates as a veritable tyranny terrorizing nations large and small with their unreasonable demands and draconian agenda.

The Greek debt crisis and financial meltdown was the perfect storm which has exposed the innate despotism of the EU organizational structure and financial policy.  After being shoehorned into the EU by previous corrupted Greek governments, Greece was expected to lie down and let the EU juggernaut simply roll over the nation.

However, Greece was always the Achilles’ heel of the EU.  Consequently, the EU BEAST cannot run without the Grecian foot.  Hence, as long as Greece is in such a state of disarray, Europe will be vexed by an integral country that has an irreparable Achilles’ heel where it concerns EU mobility, as well as viability.  How, pray tell, will the EU Beast ever run again with such a badly injured foot? The Second Half Of Acropolis Now Concerns The Trojan Horse

The Trojan Horse actually concerns all of the PIIGS nations.  Iceland, it should be noted, has already escaped the claws of the EU BEAST. The folks in Reykjavik quite astutely assessed the catastrophic nature of the European project and got the heck out … barely with their lives intact.

The other PIGS sit in their respective stew pots, each serving as a Trojan Horse of sorts.  Their governments continue to play the fraudulent EU game, of course, but the people are suffering more each day under an intolerable regime of harsh austerity and debt slavery.  Now that the original Trojan Horse of  Greece has let loose its Varoufakis and Tsirpas to lay bare EU perfidy and exploitation, perhaps the other Trojan Horses of Spain, Portugal and Italy will follow their lead.

No matter how the other Trojan Horses decide to proceed, Greece will always be recognized as the original Trojan Horse which showed the whole world what the European Union was really all about.  Rather than take care of their own, the Eurocrats in Brussels have done everything they possibly could do to undermine the sovereignty of Greece. In addition to inflicting outright humiliation on the Greek people, the EU juggernaut has economically broken the nation, after financially squeezing it bone dry.

When a HUGE economic union has been conceived for the purposes of domination both within and without, it has set itself up for abject failure — BIG time!  Not only was the Eurozone born with a fatal Achilles’ heel, it’s bottom side was full of Trojan Horses.  Not a good combination for a BEAST that’s looking for vulnerable prey o’er yonder.  An Achilles’ heel alone was enough to take the EU BEAST down for good. The rest of the world will suffer from whatever outcomes are in store for the European Union … to the extent of their entanglement.  The more materially involved that the USA is, for example, the more pain and suffering for those concerned American corporations and institutions.

If ever the people of the world — all of them, everywhere — were treated to a ringside seat at The Greatest Show On Earth, the EU vs. Greece contest is it.