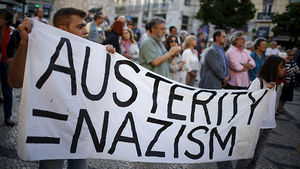 On Sunday the people of Greece can hit back at the eurozone’s busted economic system that is slowly strangling them. Their battle is ours too

Europe’s top politicians agree that the Greeks will vote this Sunday on one of the most important questions facing any nation. Yet they can’t settle what that question actually is. For Alexis Tsipras, the Greek prime minister, it is about whether his people will tolerate any more “strict and humiliating austerity“. Not so, says Germany’s Angela Merkel. She reckons the Greeks are choosing between staying in the euro and returning to the drachma. The stakes are raised higher still by the boss of the European commission, Jean-Claude Juncker: come next weekend, “the whole planet” will find out whether Greece wants to remain in Europe.

All of these may be correct, but each swerves the central importance of the moment. The reason to watch Greece this week is because a population of 11 million will hold a contest that the rest of us may one day also get to stage: a fight between democracy, and a broken political and economic system.

That battle – between what people want and what their rulers force down their throats, supposedly for their own good – can be glimpsed at every dramatic moment in Greece’s recent history.

It was already there in spring 2010, when the then prime minister, George Papandreou, begged Merkel not to crush his country with austerity, and she coolly replied: “We want to make sure nobody else will want this.” It marched into clear view in summer 2011 as ordinary Greeks swarmed cities demanding an alternative to their venal political elite and the Eurocrats and financiers who pulled the strings.

It has been unignorable ever since this January when the leftwing Syriza coalition was voted into power on an explicit mandate to roll back the vicious, self-defeating austerity that has plunged a nation into economic depression.

What happened last week was that Tsipras was backed so far into a corner by the creditors from the troika of the European commission, European Central Bank and IMF, he was left with no option other than to appeal to the democratic will of his voters.

Economics and finance are just technicalities in this argument, which is really between people and a cruelly unworkable version of capitalism. That’s the real theme of the vote, whatever the briefings from Brussels and the latest developments out of Athens. The shutdown of the banks is certainly striking. But the golden rule of capital controls is that they primarily hurt people with hardly any capital.

The Greeks you see on TV traipsing between empty cashpoints are pensioners, blue-collar workers, anxious teachers. The big money pulled much of its cash out of Greek banks ages ago. As far back as summer 2011 economists were already fretting about a “silent bank run“. A senior investment banker told me then about an acquaintance who had withdrawn €30,000, wrapped it in a bag and stashed it in his garage. “The bag had previously had some food inside,” he said. “So it attracted rats, who ate the notes.”

What this story reminds you is that the breakdown in Greece is not recent. Since 2010 the troika has peddled the fantasy that spending cuts amid a historic recession, and “structural reforms” – or the shredding of workers’ rights, the firesale of public assets and the pummelling of the welfare state – will somehow fix Greece. Half a decade later that always doubtful forecast is now proved to be a lie: the country is even more broken. Yet the technocrats keep repeating the propaganda to the subjects living through its wretched reality.

The incompatibles here are about as big as you get: the Greek people on one side, busted economics on the other. The irony is that if anyone was going to marry those incompatibles it was Tsipras. Despite it all, Syriza remains committed to the single currency, in a country that before the crisis ranked as among the most euro-enthusiastic of all the members.

As in other European countries where national poverty is still recalled by grandparents, the Greek elite treats membership of the single currency almost as a badge of first-world status. When he was still an academic, Yanis Varoufakis, the finance minister, spent years figuring out ways to make European monetary union viable. 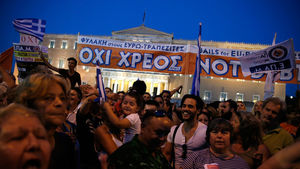 Protesters shout slogans in front of the parliament building during an anti-austerity rally in Athens, Greece, June 29, 2015.

Whatever insults the northern European press might hurl, Syriza’s leading policymakers are euro-believers who have been forced into disillusionment. Last week the government offered a compromise deal to Greece’s creditors. It was “austerian” and “recessionary“ – those words came from Varoufakis, the man who wrote it. Yet it was not austere enough for the creditors, who reportedly quibbled over Syriza’s plans to tax the rich. That was the final rupture.

Less idealistic people than Tsipras and Varoufakis might have guessed at this outcome.Since the euro crisis broke out in 2010, large swaths of the continent have fallen under the rule of institutions that find it almost impossible to deal with democracy. Most important are the European Central Bank – unelected and almost totally unaccountable – and Juncker’s European commission: neither directly nor even indirectly answerable to the Greeks, Portuguese, Irish and Spanish who have lost jobs, wages and benefits at its command.

The informal Eurogroup meeting of eurozone finance ministers is about as close to democracy as the system gets. As Fritz Scharpf, former head of the Max Planck institute for the Study of Societies in Cologne, puts it: “The regime that has been established to rescue an over-extended and ill-designed monetary union is in fact jeopardising … democratic self-government in Europe.”

This political structure is a means of pricing workers across the continent out of their standard of living, however illegitimate. So Juncker, who as prime minister of Luxembourg ran a country devoted to tax avoidance, lectures Greece on its tax system. Then, just after the election of Syriza, the ECB announces it will no longer accept Greek government bonds – which is akin to the US central bank saying it won’t accept Treasuries issued by Washington.

Comment: This here is the crux of the issue. The Greek people ‘voted the wrong way’, so the international fanciers deliberately worsened the crisis in order to punish ordinary Greeks and force ‘course correction’ by getting them to blame their new government for the suffering brought on them by the financiers, ie the Powers That Be want regime change:

The choice Greeks will have to make is whether to continue being politically and economically strangled by this regime, or to leave. Neither option is safe for Greece, or Europe. Two years ago an economist who is now part of Syriza talked about what leaving the euro might mean – soldiers at cashpoints, forced nationalisation of industries. And he told me: “Things could get very nasty very quickly.”

But given the hard choice between slow death and stepping into an abyss, I might be tempted to take the second. And if the Greeks choose it, the rest of us should support them. Their battle – people versus an impossibilist capitalism – is ours too.