The CIA, NGOs and Color Revolutions 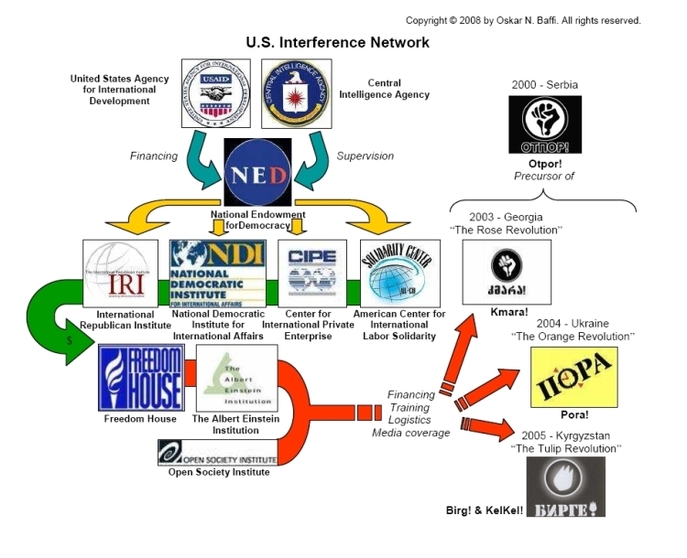 The CIA, NGOs and Color Revolutions

Perfecting The Method of “Color Revolutions”

Western leaders slip back into childhood

In 1985, a social scientist, Gene Sharp, published a study commissioned by NATO on Making Europe Unconquerable. He pointed out that ultimately a government only exists because people agree to obey it. The USSR could never control Western Europe if people refused to obey Communist governments.

A few years later, in 1989, Sharp was tasked by the CIA with conducting the practical application of his theoretical research in China. The United States wanted to topple Deng Xiaoping in favor of Zhao Ziyang. The intention was to stage a coup with a veneer of legitimacy by organizing street protests, in much the same way as the CIA had given a popular facade to the overthrow of Mohammed Mossadegh by hiring Tehran demonstrators (Operation Ajax, 1953). The difference here is that Gene Sharp had to rely on a mix of pro-Zhao and pro-US youth to make the coup look like a revolution. But Deng had Sharp arrested in Tiananmen Square and expelled from the country. The coup failed, but not before the CIA spurred the youth groups into a vain attack to discredit Deng through the crackdown that followed. The failure of the operation was attributed to the difficulties of mobilizing young activists in the desired direction.

Ever since the work of French sociologist Gustave Le Bon in the late nineteenth century, we know that adults behave like children when they are in the throes of collective emotion. They become susceptible, even if for just a critical fleeting moment, to the suggestions of a leader-of-men who for them embodies a father figure. In 1990, Sharp got close to Colonel Reuven Gal, then chief psychologist of the Israeli Army (he later became deputy national security adviser to Ariel Sharon and now runs operations designed to manipulate young Israeli non-Jews). Combining the discoveries of Le Bon and Sigmund Freud, Gal reached the conclusion that it was also possible to exploit the “Oedipus complex” in adolescents and steer a crowd of young people to oppose a head of state, as a symbolic father figure.

On this basis, Sharp and Gal set up training programs for young activists with the objective of organizing coups. After a few successes in Russia and the Baltics, it was in 1998 that Gene Sharp perfected the method of “color revolutions” with the overthrow of Serbian President Slobodan Milosevic.

After President Hugo Chavez foiled a coup in Venezuela on the basis of one of my investigations revealing the role and method of Gene Sharp, the latter suspended the activities of the Albert Einstein Institute which served as a cover and went on to create new structures (CANVAS in Belgrade, the Academy of Change in London, Vienna and Doha). We saw them at work the world over, especially in Lebanon (Cedar Revolution), Iran (Green Revolution), Tunisia (Jasmine Revolution) and Egypt (Lotus Revolution). The principle is simple: exacerbate all underlying frustrations, blame the political apparatus for all the problems, manipulate the youth according to the Freudian “patricidal” scenario, organize a coup, and then propagandize that the government was brought down by the “street.”

International public opinion easily swallowed these stage settings: first, because of a confusion between a crowd and the people. Thus, the “Lotus Revolution” actually boiled down to a show on Tahrir Square in Cairo, mobilizing a crowd of tens of thousands, while the near totality of the Egyptian people abstained from taking part in the event; and second, because there is a lack of clarity with regard to the word “revolution”. A genuine revolution entails an upheaval in social structures that takes place over several years, while a “color revolution” is a regime change that occurs within weeks. The other term for a forced change of leadership without social transformation is a “coup d’état”. In Egypt, for example, it is clearly not the people who pushed Hosni Mubarak to resign, but U.S. Ambassador Frank Wisner who gave him the order.

The slogan of the “color revolutions” harks back to an infantile perspective; What matters is to overthrow the head of state without consideration of the consequences–“Don’t worry about your future, Washington will take care of everything for you.” By the time people wake up, it’s too late; the government has been usurped by individuals not of their choosing. At the outset though, there are cries of “Down with Shevardnadze!” Or “Ben Ali, get out!” The latest version was launched at the third conference of “Friends” of Syria (Paris, July 6): “Bashar must go!”

A strange anomaly can be detected with regard to Syria. The CIA did not locate groups of young Syrians willing to chant this slogan in the streets of Damascus and Aleppo. So it is Barack Obama, François Hollande, David Cameron and Angela Merkel themselves who repeat the slogan in chorus from their respective foreign offices. Washington and its allies are trying out the methods of Gene Sharp on the “international community”. It is a risky bet to imagine that foreign ministries can be as easy to manipulate as youth groups! At the moment, the result is simply ridiculous: the leaders of the colonial powers have been stomping their feet like angry, frustrated children over a desired object that the Russian and Chinese adults won’t let them have while ceaselessly wailing “Bashar must go!“.

Thierry Meyssan, founder and chairman of Voltaire Network and the Axis for Peace Conference. Professor of International Relations at the Centre for Strategic Studies in Damascus. His columns specializing in international relations feature in daily newspapers and weekly magazines in Arabic, Spanish and Russian. His last two books published in English : 9/11 the Big Lie and Pentagate.