Stock Market Crash in 2015 is Coming, Despite Widespread Bullishness 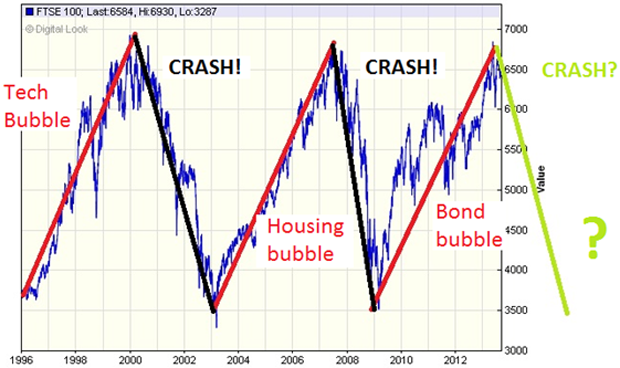 Stock Market Crash in 2015 is Coming, Despite Widespread Bullishness

With the broader U.S. stock markets trading near record highs, it’s not a big surprise to hear that most analysts, economists, and investors are increasingly bullish about the stock market. The last thing you’d expect to hear is someone talking about a stock market crash in 2015.

And why would they? After all, the stock market has been moving steadily higher since bottoming in March 2009. The New York Stock Exchange (NYSE) is up 165% since early 2009 and is in record territory, while the NASDAQ is up 275%.

The most popular stock market indices have followed a similar trajectory. The S&P 500 is probably the best overall index when it comes to measuring the health of the U.S. economy, because it captures approximately 80% of the available market capitalization.

Even when the stock markets are in full correction mode, the reversal is short-lived. In late September, over the span of three weeks, the NASDAQ and NYSE were both in correction mode, having given up more than 10% of their value and erasing all of their gains made in 2014. Both markets rebounded in short order, soaring back during the latter part of the month, fuelling investor optimism.

But the fact of the matter is that a large number of important indicators point to the fact that the U.S. could experience another stock market crash in 2015.

Remember, stock markets are only as strong as the companies within them. On the surface, all looks well, but it isn’t. That’s because the U.S. economy, while improving, is extremely vulnerable. So maybe the idea of a major stock market collapse or correction in 2015 isn’t that big of a stretch.

The U.S. unemployment rate may have slipped below the six-percent threshold, but a large number of Americans—roughly 12%—remain underemployed.(1) Wages have been flat and, perhaps not coincidently, approximately 15% of the U.S. population is on food stamps.(2)

Personal spending may be accelerating, but so too are debt levels. We may be spending, but we aren’t paying with cash. As the world’s biggest economy and largest consumer market, 71% of the country’s gross domestic product (GDP) came from consumer spending in 2013. All things considered, this is not a recipe for sustainable growth.

Also Read: 4 Strategies to Protect Yourself from a Stock Market Crash

The IMF trimmed its global growth forecast to 3.8%, down from its previous estimate of four percent, and admitted that its outlook may be too optimistic. It said there is a 38% probability that the eurozone, the world’s strongest economic region, will fall back into a recession by the end of the first quarter of 2015. Economic expansion in China, Japan, and Russia is also an issue.

These factors could foreshadow the next stock market collapse. That’s because roughly 50% of the public companies that make up the S&P 500 derive sales from Europe. So while the outlook for the U.S. stock market is encouraging, not all stocks will perform well.

The message to investors is clear: there are limits to America’s ability to carry the global economy on its own. And the economic numbers that have been rolling in just don’t synch up with what the stock markets are preaching.

Despite the eternal cheers from Wall Street, the stock market is sorely overvalued. Stocks are extremely expensive when compared to their 10-year average. Historically, stocks have a price-to-earnings ratio of 15; today, that ratio is 26.51. This means stocks are priced 76% higher than their 10-year average.

As the late John Templeton, arguably the greatest global stock-picker of the 20th century, said, “Bull markets are born on pessimism, grow on skepticism, mature on optimism and die on euphoria.”

What’s been happening to spark investor sentiment? Not much.

Generally, investors get excited about a stock when it announces solid revenue and earnings growth. Sadly, this has been sorely lacking among S&P 500 companies. In 2013, the year in which the S&P 500 realized a 30% gain, the stocks that make up the index reported underwhelming results.

The signs of stock market instability are starting to show. Despite the fact that U.S. companies reported decent second- and third-quarter earnings, for the most part, the broader markets have been flat.

Reality Will Kick In When Stock Market Euphoria Fades

And investors are beginning to clue into the fact that the stock market is becoming an increasingly risky place to be. The markets may no longer be able to climb on euphoric irrationality.

The VIX Volatility Index, also referred to as the so-called “fear index,” hit a near-three-year high of 31.06 in mid-October as investors digested unwelcomed economic news. The last time the VIX index broke through 30 was in December 2011.

Granted, the VIX has retraced significantly from its mid-October highs and is currently sitting near 12.60. This is also alarming. When the VIX is low it means investors see little demand for protection, as they do not fear any disruptive events in the coming month.

Perhaps the fact that the global economy is grinding down, most notably in the eurozone (Germany, France, and Spain) Russia, and China, will make investors sit up and take notice. Or maybe it’s the fact that the central bank in England is winding down its quantitative easing (QE) and the Federal Reserve has ended its stimulus package, the fuel that has propelled the stock market higher since 2009.

2013 may have been the year of strong double-digit gains, but 2014 is shaping up to be the year of profit-taking. The strong gains made by stocks in 2013 were, for the most part, unwarranted, driven by artificially low interest rates bestowed upon investors by the Federal Reserve’s easy monetary policy.

Investors were also distracted in 2013 by financial engineering. Because businesses on the S&P 500 couldn’t wow investors with strong earnings, they had to use other measures to prop up their numbers. These came in the shape of cost-cutting measures and aggressive share repurchase programs.

Despite a year in which the S&P 500 hit record-high after record-high, each quarter, a larger percentage of companies revised their earnings guidance lower—a seemingly obvious disconnect.

Is 2015 the Year the Stock Market Crashes?

In November 2008, the Federal Reserve stepped in with its generous bond-buying program (QE) to help kick-start the economy after it slipped into a recession. Artificially lowering the short-term lending rate to nearly zero was supposed to make banks lend more money to businesses and people.

The ultra-low-interest-rate environment has made it cheaper to borrow money—and is recognized as being the fuel that has propelled the stock market higher. The Federal Reserve has hinted it will start to wean investors off cheap money in 2015, when it begins to raise interest rates.

All of this, accompanied by high underemployment, stagnant wages, and high debt, will undercut consumer spending, crippling any chance for sustained economic growth. The road to higher returns on the heels of actual revenue and earnings will be a tough haul.