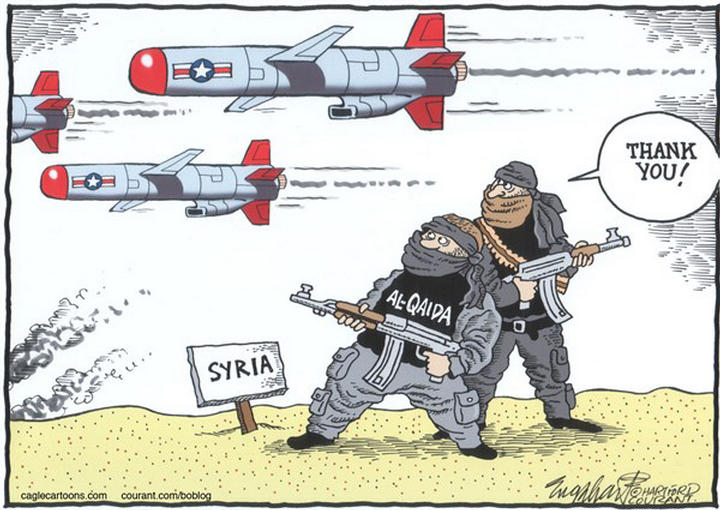 US policy think-tank Brookings Institution confirms that contrary to propaganda, US-Saudi “moderates” and Turkey-Qatar “Islamists” have been coordinating all along.

May 11, 2015 “Information Clearing House” – The war in Syria continues to drag on, with a recent and renewed vigor demonstrated behind an opposition long portrayed as fractured and reflecting a myriad of competing foreign interests. Chief among these competing interests, the public has been told, were the US and Saudis on one side, backing so-called “moderate rebels,” and Turkey and Qatar on the other openly backing Al Qaeda and its various franchises including the Islamic State (ISIS). 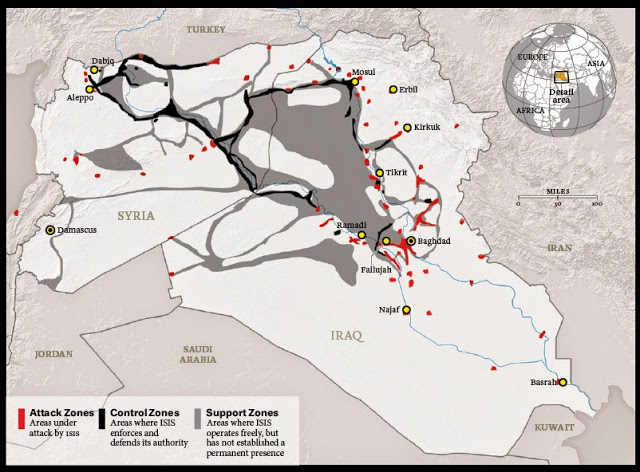 Image: The conflicts in Syria and Iraq are far from internal. Looking at a map of territory used or held by ISIS and other Western-backed sectarian extremists, it is clear that the current conflict is a regional invasion streaming out of NATO-member Turkey and US ally Jordan, now admittedly with the help of both Saudi Arabia and Qatar.

However, for those following the conflict closely, it was clear from the beginning and by the West’s own admissions that success hinged on covertly providing arms, cash, equipment, and both political and military support to Al Qaeda and other sectarian extremists, not opposed by Saudi Arabia, but rather by using Saudi Arabia as the primary medium through which Western material support could be laundered.

And this fact is now confirmed in a recent article published on the Brookings Institution’s website titled, “Why Assad is losing.”

It states unequivocally that (emphasis added):

The involvement of FSA groups, in fact, reveals how the factions’ backers have changed their tune regarding coordination with Islamists. Several commanders involved in leading recent Idlib operations confirmed to this author that the U.S.-led operations room in southern Turkey, which coordinates the provision of lethal and non-lethal support to vetted opposition groups, was instrumental in facilitating their involvement in the operation from early April onwards. That operations room — along with another in Jordan, which covers Syria’s south — also appears to have dramatically increased its level of assistance and provision of intelligence to vetted groups in recent weeks.

Whereas these multinational operations rooms have previously demanded that recipients of military assistance cease direct coordination with groups like Jabhat al-Nusra, recent dynamics in Idlib appear to have demonstrated something different. Not only were weapons shipments increased to the so-called “vetted groups,” but the operations room specifically encouraged a closer cooperation with Islamists commanding frontline operations.Overall, Brookings is pleased to report that with the infiltration and overrunning of much of Idlib in northern Syria, it appears their long-stated goal of creating a seat of power for their proxies within Syria’s borders and perhaps even extending NATO aircover over it, may finally be at hand. Brookings still attempts to perpetuate an adversarial narrative between the West and Al Qaeda, despite admitting that it was only with Western backing that recent offensives spearheaded by Al Qaeda itself were successful.

In reality, as far back as 2007, it was the admitted policy of the then Bush-led White House to begin arming and funding sectarian extremists, including Al Qaeda, through the use of intermediaries including Saudi Arabia. Veteran journalist and two-time Pulitzer Prize-winner Seymour Hersh in his report “The Redirection: Is the Administration’s new policy benefiting our enemies in the war on terrorism?“would lay bare this conspiracy which has since then unfolded verbatim as described in 2007.

The above mentioned Brookings article also alludes to a grander geopolitical landscape taking shape beyond the Syrian conflict. It states in regards to the US now openly backing what is for all intents and purposes an Al Qaeda-led offensive that:The most likely explanation for such a move is pressure from the newly emboldened regional alliance comprising Turkey, Saudi Arabia, and Qatar. The United States also is looking for ways to prove its continued alignment with its traditional Sunni Gulf allies, amid the broader context of its rapprochement with Iran.The continuation, even expansion of the US-backed conflict in Syria is the most telling evidence of all regarding the disingenuous nature of America’s rapprochement with Iran. The entire goal of destabilizing and potentially overthrowing the government in Syria is to weaken Iran ahead of a similar campaign of encirclement, destabilization, and destruction within Iran itself.

The fact that events in Syria are being accelerated, with Brookings itself admitting that “international and ideological differences,” have been “pushed to the side,” illustrates a palpable desperation among the West to finish the conflict in Syria in hopes of moving forward toward Iran before regional dynamics and Iran’s own defensive posture renders moot the West’s entire regional agenda, jeopardizing its long-standing hegemony across North Africa and the Middle East.

Similarly rushed operations appear to be underway in Yemen. With Western-backed conflicts embroiling virtually every nation surrounding Iran, the idea that the US seeks anything but Iran’s eventual destruction, let alone “rapprochement” must surely have no one fooled in Tehran.

While Brookings enthusiastically reports on the continued destruction in Syria it itself played a part in engineering and promoting, it still admits that overthrowing Syria’s legitimate government is not inevitable. While it attempts to portray Syria’s allies as withdrawing support for Damascus, the reality is that if and when Syria falls, Syria’s allies are indisputably next in line.

Iran will face an entire nation handed over to Al Qaeda and other heavily armed and well-backed sectarian extremists dreaming of a cataclysmic confrontation with Tehran, fueled by a global network of US-Saudi backed madrases turning out legions of ideologically poisoned zealots. And beyond Iran, Russia faces the prospect of its Caucasus region being turned into a corridor of terror aimed straight at the heart of Russia itself.

The conflict in Syria is but a single battle among a much larger war – a global war constituting what is basically a third World War, fought not upon vast but clearly defined fronts, but rather through the use of fourth generation warfare, proxies, mercenaries, economics, and information. For those that fail to see how Syria is linked to the survival of many nations beyond its borders and the very concept of a multi-polar world built upon the concept of national sovereignty, they invite not just Damascus’ defeat, but that of the world as we know it.