Putin Reigns Supreme In The Global Imagination Of Possibilities 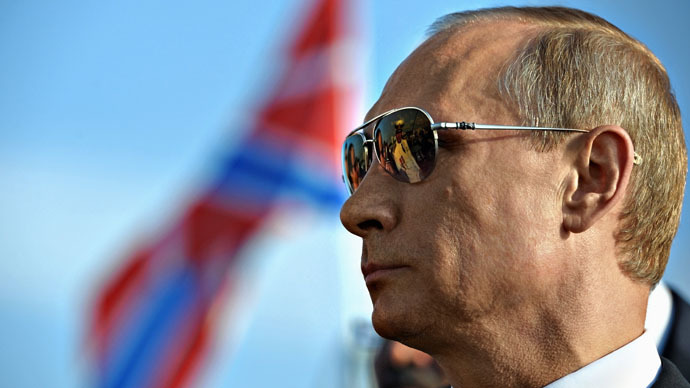 Putin Reigns Supreme In The Global Imagination Of Possibilities

Clearly President Vladimir Putin of Russia has captured the imagination of people the world over in a way that no other leader has in decades.  Simply put, he’s the man.  Really … the MAN!

Who else has ever had the cajones to stand up to the criminal psychopaths that currently terrorize the Earth realm.  Putin does know exactly who he’s dealing with.  He knows that they are of the very same ilk as the fake communists who tyrannized Russia for three quarters of a century after their Western-financed Bolshevik Revolution.

Therefore, what Putin does, or doesn’t do, now gets everyones’ attention.  After all, he literally lives his life one moment at a time given the overwhelming forces that are arrayed against him.  Which is why he is so admired.  People everywhere appreciate the public display of raw courage … spontaneous magnanimity … and extraordinary honesty.

Every time Putin speaks, he speaks to the world in a way that no other world leader has ever spoken since John F. Kennedy.  Which is precisely why he “stole the show” in the English-speaking weekly TIME 100 reader’s poll.

Just Like JFK, President Vladimir Putin Goes His Own Way

In a diverse field of competitors made up of pop stars, technology gurus, visionaries and politicians – and at a time when US-Russia relations have hit rock bottom – President Putin has emerged victorious in Time magazine’s 2015 reader poll.

Among the 100 most influential people in the world, as hand selected by the editors of TIME, the Russian leader proved his rock-star credentials by edging out 24-year-old rapper Lee Chae-rin (better known by her stage name, ‘CL’) of the South Korean girl-group 2NE1 to claim the number-one spot with 6.95 percent of the votes in the final tally.

Putin – the only world leader to rank in the top 10 – grabbed the global spotlight from the leading divas of pop music: Lady Gaga, Rihanna and Taylor Swift (2.6 percent, 1.9 percent and 1.8 percent of the votes, respectively). Aside from the Russian leader, the only non-celebrities to appear in the top 10 were the Dalai Lama (1.7 percent), Pakistani female activist Malala Yousafzai (1.6 percent) and Pope Francis (1.5 percent).

Putin’s victory appears all the more incredible when you realize that more than half the votes — 57.38 percent — were cast inside the United States, according to TIME (voters representing Canada and the United Kingdom followed with 5.54 percent and 4.55 percent, respectively). The percentage of votes that were cast from Russia has not yet been disclosed.
The Russian leader dominated the charts at a time of unprecedented tensions between Moscow and the West.

US-Russia relations suffered a major setback on November 21, 2013, when then Ukrainian president Viktor Yanukovich suspended plans for the implementation of an ‘association agreement’ with the European Union, showing a preference for closer Russian relations. This decision triggered violent Maidan protests in the capital Kiev, which eventually led to Yanukovich being forced to flee the country in February 2014.

Since then, Putin has steered his country through the rocks of major events, including a reunification with the Crimea Peninsula after a March 16 referendum, which saw an overwhelming number of people voting for it, and subsequent imposition of Western sanctions against Russian individuals and companies.

Meanwhile, Putin and the Russian economy seem to be weathering out the storm of Western sanctions, imposed in response to the Crimean referendum, as the ruble has bounced back from record lows against the dollar and the Russian stock market is one of the year’s top performers. At the same time, European leaders are cautiously optimistic that the Minsk-II agreement, hammered out between Russia, Germany, France and Ukraine on February 11, 2015, will keep the peace between pro-Kiev forces and rebels in the east of the country.

While it is doubtful that TIME magazine will argue on behalf of Putin’s handling of the Ukrainian crisis, which many commentators in the West predicted would spell the end of the Russian economy, not to mention its leader, one thing that is indisputable is Putin’s incredible staying power. 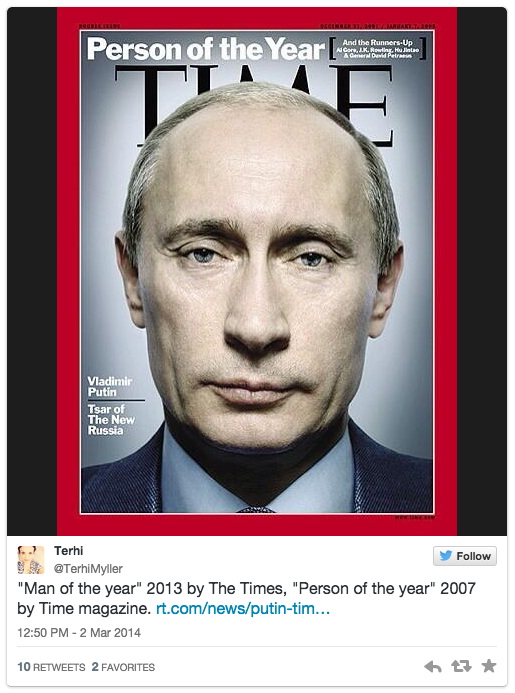 In fact, this is not the first time Putin has taken top honors in a TIME-sponsored contest. In 2007, Putin was named ‘Person of the Year.’ The popular American magazine summarized its decision for choosing Putin with the explanation: “With dauntless persistence, a sharp vision of what Russia should become and a sense that he embodied the spirit of Mother Russia, Putin has put his country back on the map. And he intends to redraw it himself.”

But perhaps the world is only now beginning to understand what Russians have understood for many years. In December, Vladimir Putin, 62, was named Russia’s “Man of the Year” for an incredible 15th successive year. His approval rating – hovering in the stratosphere around 88 percent – is something most world leaders can only dream of.

As the TIME poll indicates, Vladimir Putin – love him or loathe him – is in a political class all by himself.

The reader’s poll stopped calculating votes at 11:59 pm EST on April 10. The full list of TIME 100 winners will appear on newsstands on April 16.