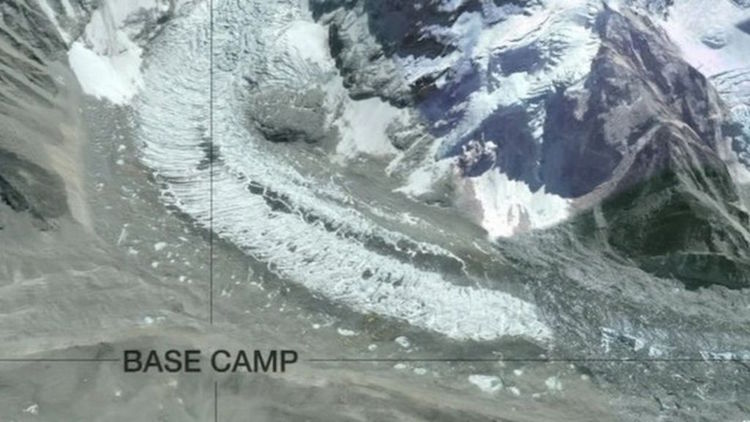 The earthquake in Nepal caused Everest’s worst ever disaster, despite the fact the mountain was 200km from the epicentre.

The quake caused multiple avalanches across the Himalayas, one of which hit the base camp of the world’s tallest mountain.

At least 17 people died and more than 60 were injured.

In the immediate aftermath of yesterday’s destructive Nepal earthquake, which has led to hundreds of aftershocks and a constantly rising death toll, currently exceeding 2000, the most visually stunning, if quite deadly, phenomenon was a massive avalanche on Mt. Everest and leading to at least 17 casualties, including a Google executive, and 61 injured.

According to Xinhua, the avalanche began Saturday on Mount Kumori, a 7,000-meter-high mountain just a few miles from Mount Qomolangma, also known as Mount Everest, gathering strength as it headed toward the base camp where climbing expeditions have been preparing to make their summit attempts in the coming weeks, he said. Numerous climbers may now be cut off on routes leading to the top of the world’s highest peak.

The avalanche plowed into a part of base camp, a sprawling seasonal village of climbers, guides and porters, flattening at least 30 tents, Tshering said. All of the dead and injured were at base camp.

For a sense of the base camp’s location relative to the rest of the world’s tallest mountain refer to the image below, taken from a May 2014 WSJ story discussing the “dangerous business” of Everest, when 16 sherpas died in what was previously the deadliest disaster in the mountain’s history.

The nationalities of base camp victims were unclear as climbers described chaotic attempts to treat the injured amid fears of more landslides and aftershocks that continue to rattle the region. Chinese media “West China City Daily” reported that a Chinese climber and two Sherpa guides were among the dead.

Dan Fredinburg, a Google executive who described himself as an adventurer, was among the dead, Google confirmed. Lawrence You, the company’s director of privacy, posted online that Fredinburg was with three other Google employees hiking Mount Qomolangma. Fredinburg served as product manager and the head of privacy at Google X.

The avalanche — or perhaps a series of avalanches hidden in a massive white cloud — plowed into a part of base camp, a sprawling seasonal village of climbers, guides and porters, flattening at least 30 tents, Tshering said. All of the dead and injured were at base camp.

Azim Afif, the 27-year-old leader of a climbing team from University of Technology Malaysia, said in an interview on the service WhatsApp that his group was in a meal tent waiting for lunch when suddenly the table and everything around them began shaking.

When they ran outside, they saw “a wall of ice coming towards us,” and heard the cries of Sherpa guides shouting for people to run for their lives, he wrote. “We just think to find a place to hide and save our life.”

The small team planned to sleep together Saturday night in one large tent “to make sure if anything happen, we are together,” Afif said. Quickly, though, climbing teams scattered across the camp and began to work together to search for survivors.

Gordon Janow, the director of programs for the Washington-based guiding outfit Alpine Ascents International, said from Seattle that his team had come through the avalanche unscathed. Their first goal was to deal with the devastation at base camp, he said, and they would then try to create new routes to help climbers stuck above the treacherous Khumbu Icefall. The icefall, which is just above base camp, is a key route up the lower part of Everest.

“Everybody’s pretty much in rescue mode, but this is different from some independent climbing accident where people can be rescued and taken somewhere else,” Janow said. “I don’t know where somewhere else is.”

… as well as a whole series of photos taken by AFP’s Roberto Schmidt who was at base camp on Everest when the avalanche hit, courtesy of Telegraph:

Pictures taken by AFP’s South Asia photo chief Roberto Schmidt show an enormous cloud of snow and debris cascading down the mountain as survivors recalled the horrifying moment that disaster struck on Saturday.

“I ran and it just flattened me. I tried to get up and it flattened me again,” Singapore-based marine biologist George Foulsham told AFP at base camp. “I couldn’t breathe, I thought I was dead. When I finally stood up, I couldn’t believe it passed me over and I was almost untouched.”

A spokesman for Nepal’s tourism department, which issues the permits to climb the world’s tallest mountain, said the death toll had risen to 17 and could increase further. “Seventeen have been reported dead so far and 61 are injured,” said Tulsi Gautam. “Those who are able are walking down. Others are being airlifted to Pheriche.” Here, rescuers use a makeshift stretcher to carry an injured person after an avalanche triggered by an earthquake flattened parts of Everest Base Camp.

An injured porter is transfered onto a makeshift stretcher

Rescuers tend to a sherpa injured in the avalanche

Many had traveled to Nepal for the start of the annual climbing season, which was cancelled last year after 16 sherpa guides were killed in what was previously the deadliest disaster in the mountain’s history

People look on at the devastation

Another makeshift stretcher for another casualty