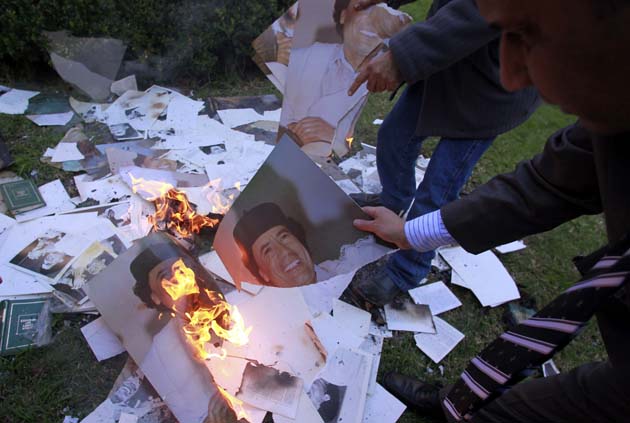 Two horrible tragedies in or at least near Libya: Up to 800 migrants trying to reach Europe from Africa die after their boat sinks off the coast, and 30 migrants are murdered by the so-called Islamic State on the shore in the troubled country.

Libya’s chaos has once more made it a major way station for Africans seeking a better life, as the European Union grapples with the morality of cutting back on patrols to rescue migrants. The argument for doing less is that increasing the risk of crossing the Mediterranean would save lives. Word that there was no safety net would filter back to people, many of them fleeing persecution, and they’d stop coming.

It clearly hasn’t worked out that way, as The Christian Science Monitor’s Nick Squires wrote in March:

Last year, a record 170,000 refugees flooded across the Mediterranean, traveling in large part out of Libya and arriving in Italy. In January, more than 3,500 refugees and migrants reached Italy from Libya, a 60 percent increase from January 2014. They come from all over Africa and the Middle East.

The Eritreans are fleeing a brutal regime which dragoons young men into military conscription and maintains a semi-permanent war footing with neighboring Ethiopia. Syrians and Iraqis are fleeing the war and atrocities committed by the self-described Islamic State, Palestinians the open prison that is Gaza, and West Africans the crushing poverty that has framed many of their lives … The vast majority of refugees make for Libya, where a power vacuum since the 2011 fall of dictator Muammar Qaddafi has enabled gangs of human traffickers to flourish …

In some corners of Europe, there is a callousness and contempt for the migrants. Columnist Katie Hopkins called them “cockroaches” in The Sun, Britain’s largest-circulating newspaper, on Friday.

“Show me pictures of coffins, show me bodies floating in water, play violins and show me skinny people looking sad. I still don’t care,” she wrote. “What we need are gunships sending these boats back to their own country. You want to make a better life for yourself? Then you had better get creative in Northern Africa.”

The callousness is far uglier in Libya itself, where local gangs prey on migrants, and racism against darker-skinned Africans is common.

The migration crisis in its current iteration stems, in part, from the fall of Libya’s Muammar Qaddafi. In 2010, Europe was moving quickly to normalize relations with the former dictator. Oil interests played a role, but so did the desire of many European nations to outsource migrant control to the North African country.

Libya’s coast has a long history of sending people – willing and unwilling – to Europe and the Americas. Ports like Tripoli and Benghazi were the final stops for medieval slave-trading caravans from the African interior until the 19th century. In recent decades, migrants have shoved off for Italy and Spain in rickety fishing boats, with Libyan officials looking the other way.

Mr. Qaddafi was well aware of European alarm at the rising tide of migrants in his final years in power. He used it as a powerful wedge to improve his own standing. Back to 2004, Qaddafi began making deals with individual European states to control the tide of migrants. In August 2010, he visited his friend Silvio Berlusconi, then president of Italy, in Rome and said Europe would turn “black” without his help.

“Tomorrow Europe might no longer be European, and even black, as there are millions who want to come in,” Qaddafi said. “What will be the reaction of the white and Christian Europeans faced with this influx of starving and ignorant Africans … we don’t know if Europe will remain an advanced and united continent or if it will be destroyed, as happened with the barbarian invasions.”

Qaddafi had a handy solution. He offered to shut down his country and its coastal waters to the job seekers in exchange for €5 billion a year. He pointed to his work with Italy as proof he could get the job done. In June 2009, he signed a “friendship” agreement with Italy that involved joint naval patrols against migrants and Italy handing over migrants captured en route to Europe to Libya, no questions asked. The number of Africans caught trying to illegally enter Italy fell by more than 75 percent that year.

By the end of the year Qaddafi had struck a more modest €50 million deal. Internment camps were built and watchtowers erected on the beaches. There was little concern with how Qaddafi went about his business and there were frequent reports of rape and theft by Libyan security services.

When the uprising against Qaddafi began in early 2011, the situation only grew worse for the African migrants. Many rebel groups were convinced that any foreign African in the country were mercenaries for Qaddafi and hundreds were executed. I met a group of such so-called “mercenaries” – some shoeless, all poor and underfed and insisting they were only seeking jobs – held captive by rebels outside Benghazi that spring.

In the years since, Libya’s lawlessness has made traveling through the country even more dangerous and unpredictable. The videotaped mass execution of Ethiopian and Eritrean migrants carried out by the so-called Islamic State makes that clear enough. Yet still people go, and the UN refugee agency is now calling the recent shipwreck the deadliest it has ever recorded.

According to survivors interviewed by UNHCR, the boat departed from Tripoli in Libya on Saturday morning with some 850 people on board, including 350 Eritreans and others from Syria, Somalia, Sierra Leone, Mali, Senegal, Gambia, Ivory Coast, and Ethiopia. As the agency reported:

UNHCR staff in Catania said the survivors looked tired and nervous. Aid workers presented them with clothes and food. “The fear in the eyes of one man, his head lowered and hands stuffed into his pockets, is plain to see,” wrote Kate Bond, a writer for UNHCR. “One survivor told UNHCR staff that there were children aboard the boat. So far, none of them have been found, although search-and-rescue operations at the site continue,” she added.

It’s hard to imagine that boatloads of African migrants are being filled in Tripoli without some of the militias that control the city taking a cut from the people smugglers. The Tunisian captain of the vessel that sank over the weekend is now in Italian custody and has been charged with murder. But in Libya, there’s money to be made and few consequences for the gunmen who control the ports. For Europe, there’s no prospect of a new Qaddafi to act as warden.