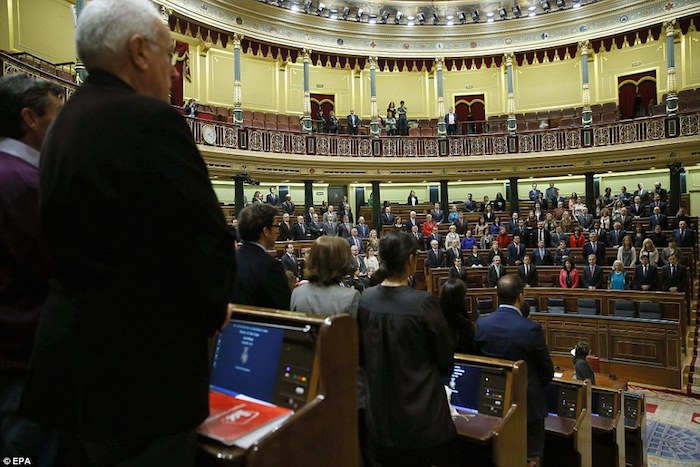 The TMR came to an independent conclusion in this previous post which determined that there was very likely a strong Spanish component to the Germanwings takedown.  Having originated in Barcelona, Spain with 45 Spanish Intel employees on board gave us very good reason to suspect that Spain was a deliberate target of this black operation as discussed here.

However, a new and much stronger theory has now emerged which cannot be overlooked. That those Spanish Intel workers were cracking a major case of cyber-snooping involving the CIA, MOSSAD, and the Vatican Bank gives rise to even greater suspicions of foul play.

“The plane may have been downed to end an investigation of massive banking fraud tied to the CIA, Mossad, Crypto AG, Siemans and the Vatican Bank.”

Hence, we would highly recommend that any interested armchair conspiracy theorist read the following authoritative account. This once highly privileged information cannot be dismissed and surely offers a key piece of evidence in this open case of airliner terrorism and mass murder.

The Crash: Coming into Focus

By Gordon Duff with VT Resources

Intelligence regarding the unintended altitude loss with incumbent loss of life related to Lufthansa 9525 from Barcelona to Dusseldorf is coming to light.

The plane may have been downed to end an investigation of massive banking fraud tied to the CIA, Mossad, Crypto AG, Siemans and the Vatican Bank.

This event also gives us need to take a new look at the downing of Pan Am flight 103 over Lockerbie, Scotland in 1988. In the world of fax machines, Crypto AG had developed a hardware hack that created a backdoor on all encrypted fax communication, giving their “clients” virtual control of not only the world banking system but almost all diplomatic correspondence as well.

Nearly half a dozen investigative “strands” tied to Flight 103 also lead to Crypto AG projects. We are told that today, Crypto AG has developed security protocols that tag all encrypted messages with a built-in hack, redirecting them to the Mossad for evaluation and “valuation.”

The internet has been filled with stories about Crypto AG and Siemens for years.  Most are “cover and deception,” pushing attention from their real tasks, manipulating the Federal Reserve System and helping the Rand Corporation rig elections, we are talking America, Britain, France, Germany and even Israel, not Iran or Nigeria.

Crypto AG is defended by a veil of lies.  Google them.  See who writes about them.  You will find that they write about themselves, using “the usual suspects” as their controlled accusators.

Opening a “Bag of Stupid”

Yesterday, a German “blogger” funded by the Jewish Defense League, named Michael Mannheim (a pseudonym) flooded the net and neocon email-o-sphere.  The story, too predicable, claimed our copilot, Germanwings 9525, had “just” converted to Islam.

Were they saying he did it while walking to the plane, Aldi brat in one hand, suddenly throwing the offending pork product to the ground, yelling out “Allah Akbar, I will crash this plane and kill all when the pilot takes his piss break a few minutes into our short flight.”

Call this both a too convenient religious conversion and a touch of “Nostra-friggin-damus” as well.  To the rest of us, we take this as a confession.  Our friends in Tel Aviv, in response to their new-found inability to control any MSM narrative, tried to pull a “Charlie.”

We had their first shot, the lost girlfriend.  The second was the “hidden depression ploy.”  Fail number 3 is the “magical conversion syndrome.”  At least he didn’t lose a tennis shoe and run up and down the aisle shooting blanks out of an AK 47.  Humor out of place?  In fact, this is the best thing we can do for the families of the dead.

They can either be part of a problem or a solution.  The more people play along, the more of these staged crashes we are going to see.  For deaths to mean anything, the victimization card had to be put back into the deck and the “kill the bastards who did this card” has to be dealt.

Here are the real questions floating around:

Crypto AG is a Swiss company specialising in communications and information security. With headquarters in Steinhausen, the company is a long-established manufacturer of encryptionmachines and a wide variety of cipher devices. The company has about 230 employees, has offices in Abidjan, Abu Dhabi, Buenos Aires, Kuala Lumpur, Muscat, Selsdon and Steinhausen, and does business throughout the world.[1]

The owner(s) of Crypto AG are unknown, supposedly even to the managers of firm, and they hold their ownership through bearer shares.[2]

Crypto AG was established in Bern by Russian-born Swede, Boris Hagelin. Originally called AB Cryptoteknik and founded by Arvid Gerhard Damm in Stockholm in 1920, the firm manufactured the C-36 mechanical cryptograph machine that Damm had patented. After Damm’s death, and just before World War II, Cryptoteknik came under the control of Boris Hagelin, an early investor, and during the War essentially operated in the United States, where 140,000 units were made under licence as C-38 (see M-209). In the early 1950s, it was transferred from Stockholm to Zug as a result of a planned Swedish government nationalisation of militarily important technology/contractors, and was incorporated in Switzerland in 1952.

The company has radio, ethernet, STM, GSM, phone and fax encryption systems in its portfolio.

Crypto AG has been accused of rigging its machines in collusion with intelligence agencies such as the German Bundesnachrichtendienst (BND) and the United States National Security Agency(NSA), enabling such organisations to read the encrypted traffic produced by the machines.[3]Suspicions of this collusion were aroused in 1986 following US president Ronald Reagan‘s announcement on national television that, through interception of diplomatic communications between Tripoli and the Libyan embassy in East Berlin, he had irrefutable evidence thatMuammar al-Gaddafi of Libya was behind the 1986 Berlin discotheque bombing in which two US service personnel were killed and another fifty injured. President Reagan then ordered the bombing of Tripoli and Benghazi in retaliation. There is no conclusive evidence that there was an intercepted Libyan message.[citation needed]

Further evidence suggesting that the Crypto AG machines were compromised was revealed after the assassination of former Iranian Prime Minister Shahpour Bakhtiar in 1991. On August 7, 1991, one day before Bakhtiar’s body was discovered, the Iranian Intelligence Service transmitted a coded message to Iranian embassies, inquiring “Is Bakhtiar dead?” Western governments were able to decipher this transmission, causing Iranian suspicion to fall upon their Crypto AG equipment.[4]

The Iranian government then arrested Crypto AG’s top salesman, Hans Buehler, in March 1992 in Tehran. It accused Buehler of leaking their encryption codes to Western intelligence. Buehler was interrogated for nine months but, being completely unaware of any flaw in the machines, was released in January 1993 after Crypto AG posted bail of $1m to Iran.[5] Soon after Buehler’s release Crypto AG dismissed him and charged him the $1m. Swiss media and the German magazine Der Spiegel took up his case in 1994, interviewing former employees and concluding that Crypto’s machines had in fact repeatedly been rigged.[6]

Crypto AG rejected these accusations as “pure invention”, asserting in a press release that “in March 1994, the Swiss Federal Prosecutor’s Office initiated a wide-ranging preliminary investigation against Crypto AG, which was completed in 1997. The accusations regarding influence by third parties or manipulations, which had been repeatedly raised in the media, proved to be without foundation.” Subsequent commentators [7][8][9][10] are unmoved by this denial, stating that it is likely that Crypto AG products were indeed rigged.

The Question of Confirmation

We have on our hands another case of “super-state” terrorism.  The “Jews” didn’t do it, it wasn’t the NSA or the “Illuminati.”  As it looks now, fingers should point to “the banks.”  But then, who are “the banks?”  What is their mechanism of power?

I think we have seen the answer to that one, certainly Crypto AG and their partners, not simply “Seimens,” are a good place to begin.  Those who access, control and use critical data on world financial and diplomatic communications are a bigger threat than any normal terror group.

That they think nothing of downing airliners to defend themselves.  They wage war and sponsor state terrorism as a daily matter of course…150 lives being nothing to them.