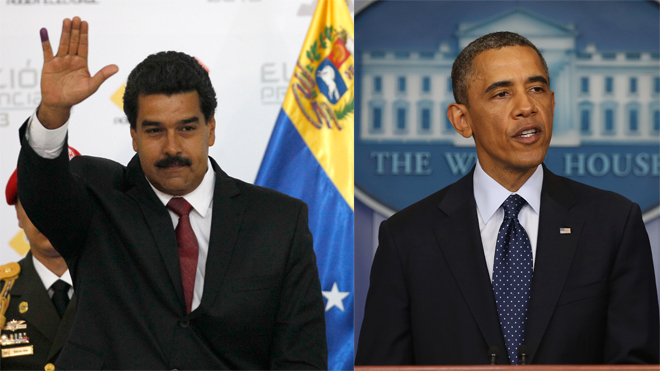 The move raised tensions between the countries. Venezuela on Monday recalled its most senior envoy to Washington, Maximilien Arvelaíz, for consultations. Diosdado Cabello,head of the National Assembly and considered the second most powerful man in Venezuela, said the sanctions herald a U.S. invasion.

“I want to alert the world, and you have to take this very seriously, comrades, and the party should mobilize in every corner of Venezuela to thoroughly repel the intentions of American imperialism,” he said in a speech. “Because what is coming and what is being planned are attacks on our land, on our country, military attacks.”

The socialist government of President Nicolás Maduro routinely accuses the U.S. of trying to orchestrate a coup. Last week, it demanded the U.S. cut its diplomatic mission in the country to 17 people from more than 100.

The sanctions are linked to a violent crackdown on antigovernment protests that swept the country last year and left 43 people dead.

The seven officials, who include the current heads of the country’s secret police and national police force, were in charge during those protests when security forces fatally shot a number of demonstrators.

The move puts all seven officials on a U.S. government blacklist that freezes any assets in the U.S. and prohibits American citizens from dealing with them.

Declaring a country a national-security threat is a formality that allow the U.S. government to impose sanctions on individuals or other countries.

The crisis has prompted the government to crack down harder on dissent, analysts say. Last month, police fatally shot a 14-year-old boy during a protest in the city of San Cristobal shortly after the government issued a new decree permitting security forces to use lethal force against antigovernment demonstrations. Also last month, the opposition mayor of Caracas was jailed on charges of conspiring against the government. Katherine Haringhton, the prosecutor handling the case of Caracas Mayor Antonio Ledezma, was also on the sanctions list, and the only person not linked to security services.

Oriette Schandendorf, Mr. Ledezma’s stepdaughter, welcomed the sanctions as evidence that the outside world cares about human rights in Venezuela.

“This is an act of solidarity and a show of concern by the U.S. government for the situation in Venezuela,” she said. “We don’t consider this meddling, as Venezuelan government says. There are no borders when there are human rights violations. That’s how we see it.”

A senior U.S. official said the executive order was prompted in part by the inability of mediation efforts by South American countries to improve the human-rights situation and stop political repression in Venezuela.

“We are concerned about serious human rights abuses, crackdowns on protesters and arbitrary detentions,” the U.S. official said.

The U.S. move, which also sets sanctions against former leaders of the National Guard and active duty officers in the army—is the most overt criticism of Mr. Maduro’s human rights record so far. Many Latin American governments, meanwhile, have refrained from criticizing Venezuela’s government.

Analysts said the U.S. move may help restrain some government officials in Venezuela who were ardent supporters of the late populist leader Hugo Chávez and who may be having second thoughts under President Maduro.

“This signals that [the U.S. administration is] taking the gloves off,” said Carl Meachamwho heads the Americas program at Washington’s Center for Strategic and International Studies. “Privately, this is designed to split the different factions within Chavismo. This makes the cracks sort of widen within Chavismo, where it is seen as sort of a Mafia with everybody starting to look behind their back.”