TMR Editor’s Note
Very few are really aware that it is unchecked corporate power and greed which is the biggest enemy of the people of Planet Earth. The Corporate-Government Complex (CGC) is truly now the bane of human existence … everywhere it sets up shop.

Post 9/11, the 800-pound CGC gorilla now sits anywhere its wants to on the global geopolitical chessboard.  It also throws its weight around with very little regard for national sovereignty or territorial integrity, human or civil rights, environmental destruction or ecological balance, legal or financial liability, cultural norms or religious sensibilities, etc., etc., etc.

For these and other critical reasons the current economic and financial order cannot continue much longer. The very fabric of the biosphere is under grave threat as is the viability of humankind.

Therefore, the U.S. Federal Government must be taken back by the American people. It is predominantly the U.S. Armed Forces, the CIA, the World Bank and various corporate hit men which are conscripted to enforce any and all contracts, both international and otherwise. Therefore, the perpetual war economy will only cease when corporations have been stripped of their capacity and power to act with virtually total impunity.

Perhaps the 2016 U.S presidential election cycle will present an opportunity for the necessary sea change. One thing is for certain, if real, fundamental change does not come soon, the Universe itself will somehow act to shut down the current CGC shock and awe strategy.  Hopefully for everyones’ sake, the CGC movers and shakers will get this message sooner than later.

The recently leaked chapter from the US-led Trans-Pacific Partnership Free Trade Agreement (TPP) allows firms to sue the countries they are operating in via private courts, steering clear of national jurisdictions, WikiLeaks reported.

The chapter, which was completed on January 20, was verified by the Public Citizen organization that was present during secret negotiations in March, teleSUR reported.

The 55-page document discusses various mechanisms that enable companies involved in transnational corporation investment to sue the states they operate in without the involvement of national courts. 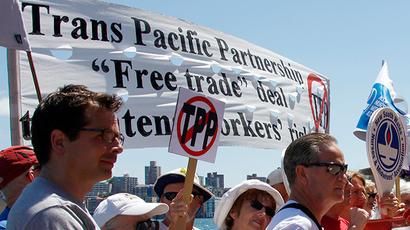 Companies can file a lawsuit if they believe to be losing profit or even have a lower expectation of profit due to changes in the“environmental, health or other regulatory objectives,” according to the leakeddocument.

Moreover, if a foreign firm feels that a new law passed by a state impacts its rights under the TPP agreement, it could challenge the country’s decision in the private arbitration system, the investor-state dispute settlement (ISDS).

Such mechanisms interfere with national sovereignty and lead to many problems, Ana Romero of the Peruvian non-governmental organization RedGE said.

“In spite of the fact that there are already similar mechanisms in the free trade agreement with the US, what is happening needs to be revised because the attraction of investors should not reinforce or expand those mechanisms that have been generation problems to the State and interfering with the national sovereignty,” Romero told teleSUR.

The leaked chapter also guarantees protection to companies from direct and indirect expropriations and amendments to the financial legislation. 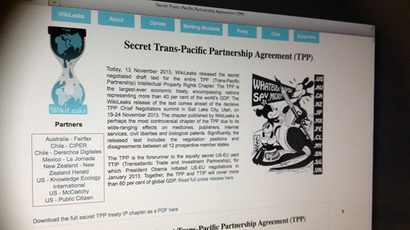 Back in 2013, WikiLeaks revealed a draft of a highly secretive, multi-national TPP agreement long in works. It has been described as a NAFTA-like deal that is expected to encompass nations representing more than 40 percent of the world’s gross domestic product when it is finally approved.

The treaty includes 12 countries, with the US at the helm. Other countries are Australia, Brunei, Canada, Chile, Japan, Malaysia, Mexico, New Zealand, Singapore, Vietnam, and Peru.

The treaty has been heavily criticized, especially due to its lack of transparency concerning meetings between potential TPP partners, including the US and several nations in the Asia-Pacific region.

Most of the draft documents have been published solely by the anti-secrecy group WikiLeaks in an effort to disclose as much of the agreement as possible before it is adopted, but opponents of the proposal in the US have expressed concern that Congress could “fast track” the deal to expedite authorization by presenting it to the House and Senate with no amendments attached.