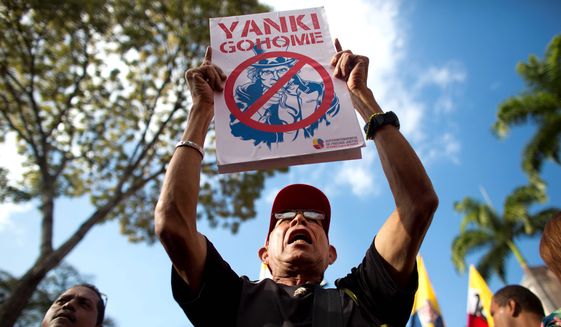 Sending a message: Venezuelans rallied for their government Thursday as President Nicolas Maduro responded to U.S. sanctions by asking legislators to expand his powers in the name of fighting imperialism. (Associated Press)
Read more: http://www.washingtontimes.com/news/2015/mar/12/obama-clash-with-venezuelas-nicolas-maduro-backfir/?page=2#ixzz3UjklY4YN
Follow us: @washtimes on Twitter

By Andre F. Radzischewski
Special to The Washington Times

BUENOS AIRES — President Obama largely shrugged off the provocations of Hugo Chavez, but a clash with the late Venezuelan leader’s hand-picked successor may be backfiring.

Latin American leaders have rallied around embattled Venezuelan President Nicolas Maduro as relations between Washington and Caracas have plunged to a new low.

Governments from Havana to Buenos Aires have denounced Mr. Obama’s executive order labeling Venezuela as a national security threat as unwelcome U.S. meddling in regional affairs. Analysts say the move may do little to improve the volatile situation in Venezuela and could well worsen it.

The Obama administration imposed sanctions against seven high-ranking Venezuelan officials Monday as it accused Mr. Maduro of human rights abuses. It demanded the release of “all political prisoners,” including opposition leader Leopoldo Lopez, detained since February 2014, and Caracas Mayor Antonio Ledezma, whom the government accuses of plotting a coup.

Mr. Maduro, a former bus driver and union leader who succeeded the populist Chavez in 2013, fired back that the “U.S. imperialist elite” was trying topple his government. Venezuela’s allies across the Western Hemisphere have supported that view.

Ecuador called the U.S. order an “unacceptable attack on Venezuela’s sovereignty,” and Cuba — in the midst of efforts to mend ties with the United States — assured Caracas of its “unconditional support.”

The Venezuela spat throws a wrench into U.S. hopes for better relations with Latin America in the wake of the Cuba rapprochement. Many countries in Central and South America have long said the more than 50-year U.S. embargo on Havana was an impediment to better relations with the region as a whole.

Now the Venezuelan Congress, controlled by Maduro supporters, is racing to give the president expanded powers to fight “imperialism” from the north, including revived decree power to enact laws for up to six months without legislative approval. The measure could pass as soon as Sunday.

In Argentina, a close ally of President Cristina Fernandez doubled down Thursday by saying that Venezuela could not constitute a threat to a superpower such as the United States.

In recent months, Venezuela has been marked by violent repression of protests, price inflation nearing 70 percent, plunging oil revenue with falling global prices and long lines at grocery stores that have led to severe shortages of basic household goods.

“The attitude of the United States is absolutely exaggerated and surprising,” Mr. Godoy said in an interview. Acknowledging that he was troubled by some “incidents” in Venezuela, the senator insisted that they were internal matters and that the rule of law was intact.

“Of course I have confidence” in Mr. Maduro, Mr. Godoy said. “The government of Venezuela is in [a position] to resolve [this situation].”

In Ecuador, meanwhile, Mr. Obama’s executive order was a gift to leftist President Rafael Correa, who was a close friend of Chavez, said Felipe Burbano de Lara, who teaches at the Latin American Social Sciences Institute in Quito.

“It allows [Mr. Correa] to reactivate the talking points of ‘imperialist destabilization,’” the political scientist said. “My impression is that the U.S. government committed an error.”

The Ecuadorean opposition has largely ignored the issue, which seems to play into the president’s hand, Mr. Burbano de Lara said, and Mr. Obama stands little chance of changing minds within a ruling class closely allied with Caracas.

“The Ecuadorean government maintains a permanent silence about the events in Venezuela,” he said. “[Its] ideological loyalty is more important than any facts.”

Mr. Obama’s executive order seems to have had the least blowback in Venezuela, said Yorelis Acosta de Oliveira, a political scientist at the Central University in the country’s capital.

Although the latest sanctions did “raise dust in the Venezuelan political class,” the measures had a direct effect on only a small number of high-ranking officials, Ms. Acosta de Oliveira said. But they did serve as an effective propaganda tool for Mr. Maduro.

“Maduro uses this situation to create a great smokescreen,” she said. But “Venezuelan society is worried about other things.”

Maduro aides show no signs of trying to tamp down the animosity. Venezuelan Foreign Minister Delcy Rodriguez on Thursday argued that the U.S. debate over a war resolution for fighting the Islamic State in Iraq and Syria also could be laying legal groundwork for a war against Venezuela.

“The U.S. is preparing to declare war on all countries because requesting authorization to use military force without a geographic restriction means they can invade any country,” the minister told China’s Xinhua News Agency, saying her country is bracing for a Cuba-like economic and financial embargo from Washington.

Whether the dispute with the Obama administration will divert attention from Venezuela’s domestic woes is an open question.

The Obama administration was correct when it pointed to Mr. Maduro’s human rights abuses, Mr. Burbano de Lara and Ms. Acosta de Oliveira said. The U.S. government also said it was acting partly in response to sanctions announced in Caracas restricting the number of U.S. diplomats allowed in the country.

Since Mr. Maduro succeeded Chavez after his death in 2013, the number of protests has increased — along with the number of violent responses by authorities at those demonstrations. But with weakened institutions and a fragmented opposition, hopes for change remain limited despite parliamentary elections set for the end of this year.

“There is no separation of powers, there is no balance in electoral campaigns,” Ms. Acosta de Oliveira said. “This is not a democracy.”