The four reasons Russia won’t give up Syria, no matter what Obama does 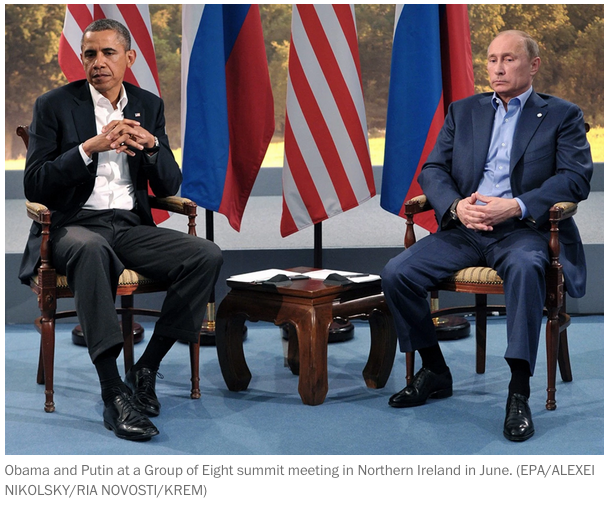 The four reasons Russia won’t give up Syria, no matter what Obama does

President Obama arrived in Russia today for the Group of 20 economic summit, where everyone is hoping he might be able to make some progress with Russian President Vladimir Putin over Syria. But Obama will not actually be meeting with Putin — they had planned a one-on-one, but the White House canceled it after Russia sheltered NSA leaker Edward Snowden. So the mission to soften Putin’s support for Syria, which is a major obstacle to ending the war, would appear to be over before it’s begun.

It’s probably just as well. Russia has, or believes it has, four big reasons for supporting Syria. And those reasons are so important to Russia’s sense of its own national interests, not to mention its view of itself as a wounded great power, that there’s probably not much Obama could do to get it to change its position.

It most matters that Russia still backs Syria because Moscow blocks the U.N. Security Council from passing anything that might hurt the regime of Syrian leader Bashar al-Assad. That means that, under international law, almost any U.S.-led military action against Assad would be illegal. (As some critics point out, it doesn’t say much for international law that it can be dictated by Moscow.) Given that the Obama administration’s primary case for strikes rests on enforcing the international law and norm against chemical weapons, Russia has managed to not just hobble any international effort to organize against Syria but even the Obama administration’s domestic case for strikes.

Russia’s support for Syria also includes sending lots of weapons that make it easier for Assad to keep killing civilians and will make it much harder if the outside world ever wants to intervene. And, whether or not you think military action is a good idea, it’s also true that Russia’s support for Assad makes him less likely to negotiate or to accept a peace deal if he thinks he can win outright.

Here are the four big reasons that Russia wants to protect Assad, the importance of which vary depending on whom you ask, but all of which are probably worth much more to Putin than anything Obama might offer or threaten:

1. Russia has a naval installation in Syria, which is strategically important and Russia’s last foreign military base outside the former Soviet Union.

2. Russia still has a bit of a Cold War mentality, as well as a touch of national insecurity, which makes it care very much about maintaining one of its last military alliances.

3. Russia also hates the idea of “international intervention” against countries like Syria because it sees this as Cold War-style Western imperialism and ultimately a threat to Russia.
4. Syria buys a lot of Russian military exports, and Russia needs the money.

With the exception of the fourth, you might notice that all of these have something to do with the Cold War, which still very much influences Russia’s view of itself, its place in the world and its relationship with the dreaded West. To paraphrase Faulkner, the past is never dead in foreign affairs. It isn’t even past.