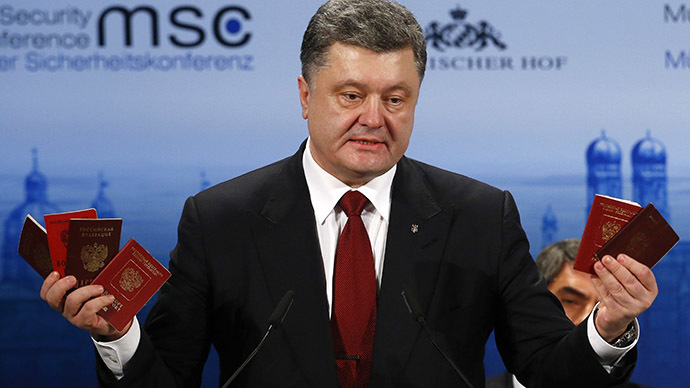 Ukraine’s President Petro Poroshenko holds Russian passports to prove the presence of Russian troops in Ukraine as he addresses during the 51st Munich Security Conference at the ‘Bayerischer Hof’ hotel in Munich February 7, 2015. (Reuters/Michael Dalder)

President Poroshenko’s PR advisers are helping him turn speeches into a kind of performance art. Sadly for the Ukrainian leader, they are more Laurel and Hardy than Laurence Olivier.

On Saturday, Poroshenko was again engaged in physical theatre, this time in Munich. Holding up Russian passports, he alleged that they belonged to Russian soldiers who had been found on Ukrainian soil. Citing “mountains of (Russian) lies and propaganda,” the Ukrainian President stood on a German stage and, well, lied.

Speaking of ‘propaganda,’ Yahoo news called the Russian (civilian) passports – which all Russians traveling abroad carry – ‘military ID’s’ which is certainly a new one.

Russian soldiers cannot use their passports while on active service – they must hand them in. Everybody who has ever lived in Russia knows this. Indeed, even contract soldiers are forced to hand in theirs while on army business and, like the troops, they get a replacement military ID. This is why Sochi’s bars are crawling with off-duty Russian military – they can’t go abroad without their travel documents.

However, many Russian civilians who are army reservists (much like the US National Guard) would have both passports and military ID’s. Theoretically, Russian reservists – who are not employed by the Kremlin – could act as volunteers in Ukraine…in much the same way that mercenaries from as far-flung areas such as Spain, Poland, Croatia andCanada have been documented as serving in the Ukrainian civil war.

A widely believed canard is that the Great Wall of China is the only man-made structure visible to the naked-eye from space. Indeed, it’s fair to say that more think the fable true than are aware that it’s merely an urban legend. In reality, the Great Wall is quite difficult to spot from above the stratosphere. It was constructed from nearby stone and largely blends in with its surroundings. Instead, it’s much easier to discern motorways and airports from space.

Spy satellites can be easily noticed in space these days due to the sheer number in orbit.

The US is known to operate Kennan-class devices which are reported to have an imaging resolution of around 6 inches. This means they can easily see a child’s bicycle parked in a driveway.

Two weeks ago, Ukraine’s President Petro Poroshenko told the Davos forum that Russia had 9,000 troops in his country. Media outlets from around the globe reported his statement, without caveats, including the BBC, Reuters and Mashable. In fact a Google search for “9,000 Russian soldiers in Ukraine” produces 402,000 results.

The US was quick to amplify Poroshenko’s claims with Washington’s UN Ambassador, Samantha Power, taking to Twitter to admonish Russia’s President Putin. NATO immediately claimed that the movement of “heavy military equipment” from Russian into Ukraine had recently increased in volume.

However, there’s a major problem here. There are no satellite photos showing this supposed incursion. The US government, NATO and President Poroshenko assert that 9,000 troops and a lot of large equipment (including tanks) have passed from Russia into Ukraine. Yet, they cannot produce one single image to support their thesis. They don’t even need to capture all 9,000 in one picture, just a dozen or so personnel and perhaps a tank would do.

These incredibly detailed satellite photos from Boko Haram’s atrocities in Nigeria were released last month. Their existence proves that the US has the technology to snap a large scale movement of men. However, they cannot produce a similar image from the Russia-Ukraine border area. Why is this? Perhaps because there are not 9,000 Russian soldiers in Ukraine, there are no tanks crossing the frontier and President Poroshenko was lying?

Meanwhile, we know that American soldiers will soon be deployed to Ukraine because the US freely admits it. Russia is under sanction for supporting separatist rebels in the Ukrainian civil war. Nevertheless, the Kremlin denies that its military is interfering in the conflict and Washington cannot produce a single photo to contradict them. However, the US is openly sending its own forces to aid Kiev and nobody seems to have a problem with the escalation. This is perverse logic.

Russia does acknowledge that volunteers, including servicemen, have gone to Ukraine to aid the rebels. Given that the insurgents are ethnic Russians who support Ukraine’s integration with Moscow, this is hardly a big surprise. It’s also the case that Russian citizens are fighting on the opposite site. Indeed, a Russian-citizen from Chechnya named Adam Osmayev is openly commanding a militia in Debaltsevo, which favors the Kiev regime.

Poroshenko not only dropped the 9,000 men fib at Davos, he also held up a panel from a bus which had been destroyed at Volnovakha a few days earlier. The horrific attack left 12 innocent passengers dead. The billionaire oligarch’s actions had echoes of Colin Powell holding a vial of what was alleged to be Iraqi weapons of mass destruction (WMD) at the UN Security Council back in 2003.

Of course, following a brutal war and hundreds of thousands of deaths, we eventually discovered Iraq had no WMD. In 2012, Israel’s Benjamin Netanyahu waved a cartoon nuclear bomb around, also at the UN. One wonders are they all using the same PR company?

Petro Poroshenko obviously pulled the 9,000 troops fantasy out of the ether in Davos. This weekend he attempted another silly, headline grabbing, stunt in Munich. His actions make him look foolish. It’s time for Willy Wonka to sack his PR team.