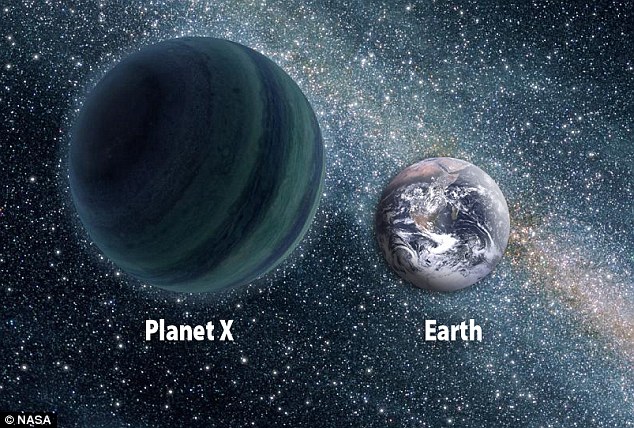 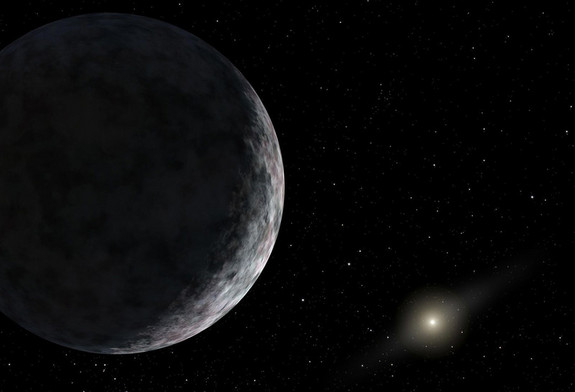 At least two planets larger than Earth likely lurk in the dark depths of space far beyond Pluto, just waiting to be discovered, a new analysis of the orbits of “extreme trans-Neptunian objects” (ETNOs) suggests.

Researchers studied 13 ETNOs — frigid bodies such as the dwarf planet Sedna that cruise around the sun at great distances in elliptical paths. [Meet Our Solar System’s Dwarf Planets]
Theory predicts a certain set of details for ETNO orbits, study team members said. For example, they should have a semi-major axis, or average distance from the sun, of about 150 astronomical units (AU). (1 AU is the distance from Earth to the sun — roughly 93 million miles, or 150 million kilometers.) These orbits should also have an inclination, relative to the plane of the solar system, of almost 0 degrees, among other characteristics.

But the actual orbits of the 13 ETNOs are quite different, with semi-major axes ranging from 150 to 525 AU and average inclinations of about 20 degrees.

“This excess of objects with unexpected orbital parameters makes us believe that some invisible forces are altering the distribution of the orbital elements of the ETNOs, and we consider that the most probable explanation is that other unknown planets exist beyond Neptune and Pluto,” lead author Carlos de la Fuente Marcos, of the Complutense University of Madrid, said in a statement.

“The exact number is uncertain, given that the data that we have is limited, but our calculations suggest that there are at least two planets, and probably more, within the confines of our solar system,” he added.

The potential undiscovered worlds would be more massive than Earth, researchers said, and would lie about 200 AU or more from the sun — so far away that they’d be very difficult, if not impossible, to spot with current instruments.

Details of the cold objects that orbit far from the sun.Astronomers are discovering trans-Neptunian objects belonging to the Oort Cloud, the most distant region of Earth’s solar system. See how the dwarf planets of Sedna and 2012 VP113 stack up in this Space.com infographic.
Credit: By Karl Tate, Infographics ArtistView full size image
The new results — detailed in two papers in the journal Monthly Notices of the Royal Astronomical Society Letters — aren’t the first to lend credence to the possible existence of a so-called Planet X.

In March 2014, Chadwick Trujillo and Scott Sheppard announced the discovery of 2012 VP113, an ETNO that never gets closer to the sun than 80 AU. 2012 VP113 thus joined Sedna as the two known denizens of the “inner Oort Cloud,” a far-flung and largely unexplored region of space beyond the Kuiper Belt (where Pluto lies).

Trujillo and Sheppard suggested that the orbits of 2012 VP113 and Sedna are consistent with the continued presence of a big “perturber” — perhaps a planet 10 times more massive than Earth that lies 250 AU from the sun.

However, the pair also stressed that other explanations are possible as well. For example, Sedna and 2012 VP113 may have been pushed out to their present positions by long-ago interactions with other stars in the sun’s birth cluster. The objects may also have been nabbed from another solar system during a stellar close encounter.

De la Fuente Marcos and his colleagues acknowledge the possibility of such alternative scenarios as well. The picture should get clearer as researchers study the orbits of more and more distant, icy objects, he said.

“If it is confirmed, our results may be truly revolutionary for astronomy,” de la Fuente Marcos said.