First The Argentine Special Prosecutor Fabricates A Case Against President Cristina Fernandez (1/14/15), Then Alberto Nisman Is Found Dead At Home (1/18/15) 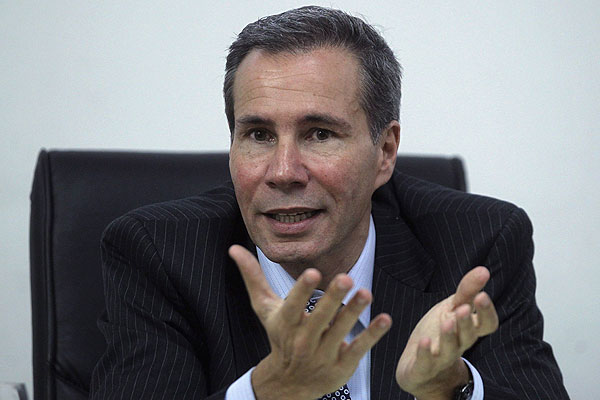 TMR Editor Note:
This story is another example of a MOSSAD-conducted false flag operation in Argentina which was blamed on Iran but proven otherwise.  The bomb attack in 1994 killed 85 people at the Argentine Israelite Mutual Association building in Buenos Aires.  Then an Israel-connected special prosecutor fabricates a case of “conspiracy to coverup” against the sitting president 20 years later.  Zionist designs against Iran apparently permit the purposeful collapse of governments anywhere, anytime, anyway.

Argentina’s AMIA special prosecutor Alberto Nisman confirmed his complaint against President Cristina Fernandez and several other officials over an alleged “criminal deal of impunity” with Iran and explained the role of every one of those he accused for “covering up” Teheran’s involvement in the attack against the Jewish centre in 1994 in Buenos Aires.

In a radio interview on Thursday, a day after filing the case, Nisman ratified his accusations against president Cristina Fernández. “From all the phone tapping records, which were verified, we proved that two months after the death of (former president) Néstor Kirchner (…) Argentina made a 180-degree turn in its foreign policy.”

The prosecutor went on: “(The Executive) decided to approach Iran geopolitically (…) they wanted to establish full diplomatic relations, and more importantly, a commercial trade due to the energy crisis that Argentina faced.”

Nisman has accused the government of improving its relation with Tehran in order to obtain oil and to boost grain exports at the expense of covering up Iranian officials’ involvement in the bombing.

He explained that the special prosecutor’s office was established by former president Nestor Kirchner in 2004 and began its work in 2005. He pointed out that at the time, the then Foreign Minister Rafael Bielsa had received a proposal by Iran to exculpate the suspects in the attack.

“Bielsa said so very clearly: we have received an offer from the Iranians to buy wheat for 4bn dollars, a very beneficial economic offer, in exchange we have to state that the prosecutor’s complaint was all a mistake and void it,” Nisman said.

However, the prosecutor said that ex president Kirchner had nothing to do with those offers. “(Nestor Kirchner) always said ‘this is a Judicial issue, get out of here’.”

“The president decided to give impunity to Iran, to exculpate (the suspects) in the probe, so they would no longer be under investigation. All the decisions were taken by her. All the talks (recorded in phone taps) relate to her (…) She was aware of everything and (Foreign Minister Hector Timerman) did not move without the president’s consent,” he said.

Nisman said that the Memorandum of Understanding signed in 2013 between Argentina and Iran “was presented as something to help unblock the negotiations and ended up being a criminal deal of impunity which was reached once everything else was already agreed beforehand.” He added that the agreement was “a way to introduce a false lead” in the probe.

He said that before the Memorandum was approved, “Argentina’s intelligence agents told the Iranians ‘relax, good news, we have already won’.”

Nisman also rejected questions from the judge in charge of the 1994 bombing case, Rodolfo Canicoba Corral who said he ”was not consulted as he should have been about the prosecutor’s investigation into (Cristina) Fernandez“.

Carnicoba Corral said evidence put forth by the special prosecutor, including recorded telephone calls in which Nisman says state security agents talked with the bombing suspects, was flawed.

”When the wiretaps are done without control, they are not irrefutable,“ Canicoba Corral said. ”Nisman took it upon himself to initiate an investigation without judicial control.“

However Nisman pointed out he had not ordered or asked for any wire tapping, ”I simply worked with evidence collected along the years”.

The BBC’s Ignacio de los Reyes says a weapon was found next to Mr Nisman’s body, but the circumstances surrounding his death remain a mystery

An Argentine federal prosecutor who accused President Cristina Fernandez de Kirchner last week of a cover-up has been found dead at his home in the capital, Buenos Aires.

Alberto Nisman was investigating the 1994 bombing of a Jewish centre in Buenos Aires in which 85 people died.

On Wednesday, he accused the president of involvement in a plot to cover up Iran’s alleged role in the bombing.

The president’s spokesman dismissed the allegations as “ridiculous”.

Mr Nisman, 51, was found dead by his mother in the bathroom of his home. 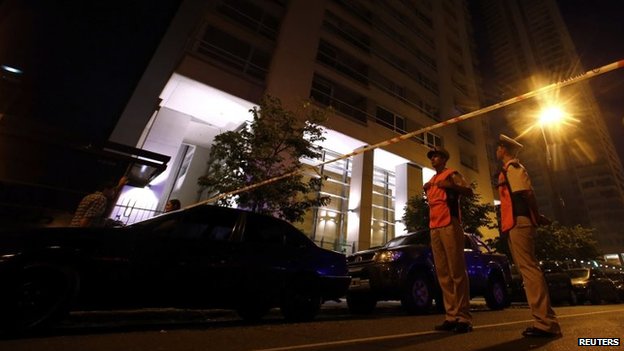 The Security Ministry released a statement saying that Mr Nisman’s bodyguards had raised the alarm after he failed to answer their phone calls on Sunday.

Concerned about his welfare, they fetched Mr Nisman’s mother and tried to enter his apartment, the statement said.

They found the door locked from the inside with a key still stuck inside.

After a locksmith gained access, they found Mr Nisman’s body in the bathroom.

According to the statement, a gun and a cartridge shell were found next to his body.

Mr Nisman was due to give evidence at a congressional committee hearing on Monday to outline his accusations against President Fernandez and other officials. 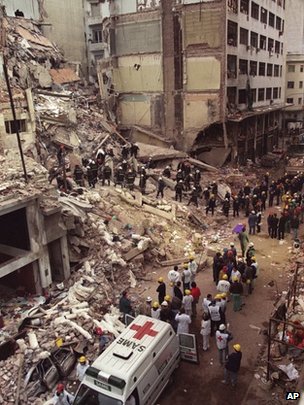 Eighty-five people died in the 1994 bombing

He had published a 300-page report on Wednesday alleging that the president and Foreign Minister Hector Timerman had opened a secret back channel to Iranians suspected of involvement in the bombing of the community centre.

Mr Nisman alleged that the scheme was intended to clear the Iranian suspects in order to facilitate a trade deal between Iran and Argentina.

He said that he had issued a request that a judge question the president and the foreign minister “for being authors and accomplices of an aggravated cover-up and obstruction of justice regarding the Iranians accused of the Amia [Israeli-Argentine Mutual Association] terrorist attack”.

The car bombing of the seven-storey building was the worst terrorist attack in Argentina’s history.

In 2007, Argentine prosecutors accused Iran of planning and financing the attack, and the Lebanese militant group Hezbollah of carrying it out.

Iran dismissed the allegations as “baseless”.

So far, no-one has been convicted in connection with the Amia attack.

Last July, at events marking the 20th anniversary of the bombing, Pope Francis demanded justice for the victims.

In a recorded video to mark the anniversary, the Pope described the attack as an “act of madness”.