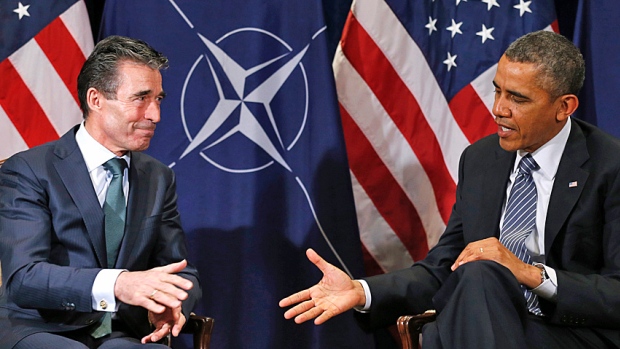 “In the implementing of their policies, our western partners – the United States first and foremost – prefer to be guided not by international law, but by force. They believe in their own ‘exceptionalism’, that they are allowed to decide on the fate of the world, and that they are always right.”

– Alexander V. Zakharchenko, Chairman of The Council of Ministers of The Donetsk National Republic, The Vineyard of the Saker 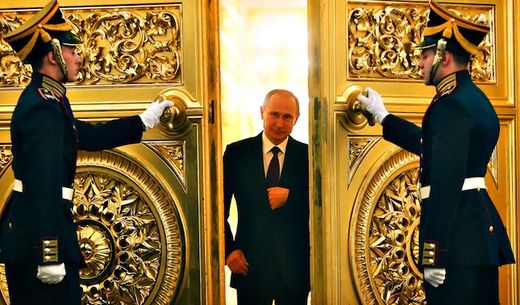 There is no way to overstate the significance of what has transpired in Ukraine in the last three weeks. What began as a murderous onslaught on the mainly Russian-speaking population of east Ukraine, has turned into a major triumph against a belligerent and expansionistic empire that has been repulsed by a scrappy, battle-hardened militia engaged in a conventional, land-based war. The conflict in east Ukraine is Obama’s war; launched by Obama’s junta government, executed by Obama’s proxy army, and directed by Obama’s advisors in Kiev. The driving force behind the war is Washington’s ambitious pivot to Asia, a strategy that pits Russia against Europe to prevent further economic integration and to establish NATO forward-operating bases on Russia’s western border. Despite the overheated rhetoric, the talk of a (NATO) “Rapid Reaction Force”, and additional economic sanctions; the US plan to draw Ukraine into the western sphere of influence and weaken Russia in the process, is in tatters. And the reason it is in tatters is because a highly-motivated and adaptable militia has trounced Obama’s troopers at every turn pushing the Ukrainian army to the brink of collapse. Check out this frontline update from The Saker:

“The (Ukrainian Army) is not retreating on one, two or even three directions, it is retreating everywhere (except north of Lugansk). Entire battalions are leaving the front under orders of their battalion commanders and without the approval of the Junta leaders. At least one such battalion commander is already being judged for desertion. The entire Ukie leadership seems to be in a panic mode, especially Latseniuk and Kolomoiski, while the Nazis are mad as hell at the Poroshenko administration. There are constant rumors of an anti-Poroshenko coup by outraged Nazi nationalists…..

The bottom line is this: Poroshenko promised a victory in a matter of weeks and his forces suffered one of the most total defeats in the history of warfare. ….the most likely thing is that this ridiculous “Banderastan” experiment has seriously begun sinking now and that many rats are leaving the ship.

“The War in Ukraine“, Vineyard of the Saker

The fact that the demoralized Ukrainian army has been defeated by the superior fighting force is of little importance in the big scheme of things, however, the fact that Washington’s global resource war – which began on 9-11 and has reduced numerous sovereign countries into anarchic, failed states – has been stopped in its tracks, is significant. The so called War on Terror – which was recently rebranded under the ISIS moniker – has wreaked holy havoc and death on Iraq, Afghanistan, Libya, and now Syria. By routing the Ukrainian army the Novorussian Armed Forces (NAF) has put the kibosh on Obama’s Great Game strategy in Eurasia and torpedoed Washington’s plan to rule the world by force of arms. It could be that the battles of Lugansk and Donetsk are eventually regarded as the turning point, where the lumbering and over-extended empire finally met its match and began its precipitous decline. In any event, there’s no doubt that Friday’s ceasefire agreement is a serious blow to US hegemony.

Comment: For their track record see: U.S. led ‘regime change’ in action: 35 countries where the U.S. has supported fascists, drug lords and terrorists

The Problem Is NATO

“The defining factor in relations with NATO remains the unacceptability for Russia of plans to move the military infrastructure of the alliance towards our borders, including via enlargement of the bloc,” said Mikhail Popov, deputy head of Putin’s Security Council.

The issue has always been NATO expansion, not the ridiculous claim that Putin wants to rebuild the Russian Empire. The only one interested in in stitching together a global Caliphate is Barack Hussein Obama and his nutcase neocon advisors. Putin is not interested in an empire. Putin just wants to make money like everyone else. He wants to sell gas to Europe, raise living standards and rebuild the country. What’s wrong with that?

Putin’s not a troublemaker. He’s not sticking a freaking first-strike nuclear missile system in Havana just 60 miles from Miami. But that’s what Obama wants to do. Obama want to establish NATO bases on Russia’s doorstep and deploy his fake-named “missile defense system” a couple hundred miles from Moscow. Putin can’t allow that. No one in their right mind would allow that. It’s a direct threat to national security. Here’s how Putin summed it up in a recent press conference:

“Russia is an independent and active participant of international relations. Just like any nation it has national interests that must be taken into consideration and respected…..We stand against having a military organization meddling in our backyard, next to our homeland or in the territories that are historically ours. I just cannot imagine visiting NATO sailors in Sevastopol,” he stressed. “Most of them are fine lads, but I’d rather they visit us in Sevastopol than the other way around.” (Vladimir Putin)

Washington’s harebrained gambit was doomed from the get go. Who made the decision to topple Yanuchovych, install a US-puppet in Kiev, fill-out the security services with neo Nazis, and wage a bloody ethnic cleansing purge on the Russian-speaking people in the east? Who was it? Isn’t there any accountability among the Obama team or is it all a matter of “failing upwards” like the Bush crowd? Here’s Putin again:

“Our western partners created the ‘Kosovo precedent’ with their own hands. In a situation absolutely the same as the one in Crimea they recognized Kosovo’s secession from Serbia legitimate while arguing that no permission from a country’s central authority for a unilateral declaration of independence is necessary….And the UN International Court of Justice agreed with those arguments. That’s what they said; that’s what they trumpeted all over the world and coerced everyone to accept – and now they are complaining about Crimea. Why is that?”

Doesn’t Putin have a point? Isn’t this what we’ve seen over and over again, that there’s one standard for the US and another for everyone else?

Comment: One of the most recent examples: It’s not escalation if we do it: NATO to ship weapons to Kiev

Of course it is. But Putin’s not going to stand for it. In fact, just this week, Russia’s Foreign Minister Sergei Lavrov expanded on Putin’s comments in an interview that never appeared in the western media. Here’s what he said:

“The current stage of international relations is marked by a transition to a fundamentally new world order – a polycentric model based on due regard for the appearance of new economic and financial centres. And political weight comes with economic and financial influence. Transition to a polycentric world order reflects an objective trend according to which the world order should be based on the world’s cultural and civilisational diversity. This is objective reality, which no one can deny…

After a long period of dominance in global economy and politics, these countries are trying to keep their positions by artificial means. They know that their economic positions are not as strong as they were after WWII, when America accounted for over half of global GDP, but they are trying to use all available military and political instruments, social media, regime-change technology and other instruments to keep back the objective process of the development of a democratic world order based on the equality of all sides.

Not everyone has realized yet that it is impossible to move contrary to an objective historical process. We strongly hope that this will happen, because otherwise more illegal unilateral sanctions will be approved against Russia, to which we will respond accordingly, as we have already tried to do. But this, I repeat, is not our choice; we don’t want confrontation.” (Press Conference: Russia’s Foreign Minister Sergei Lavrov)

“A new world order based on a polycentric model”? What a great idea. You mean, a world in which other sovereign nations get a say-so in the way the world is run? You mean, a world in which the economic, political, and military decision-making does not emerge from one center of power that is dominated by privately-owned banks, transnational corporations and voracious western elites? You mean, a world in which international law can be applied evenly so that one country cannot unilaterally create off-shore gulags, or incite color coded revolutions, or carry out extra-legal abductions and killings, or order drone attacks on wedding parties or conduct any of the other heinous violations of human rights which imperial Washington engages in without batting an eye?

The NAF’s victory in east Ukraine brings us all one step closer to actualizing the multi-polar world of which Lavrov and Putin speak so glowingly. In fact, just hours ago Ukrainian President Petro Poroshenko capitulated and signed a ceasefire agreement with the leaders of the anti-fascist militia, Igor Plotnitsky and Aleksandr Zakharchenko. (Remember: “We never negotiate with terrorists”?) Ukraine’s National Security Council (SNBO) has reported that its troops have halted all military actions. The government’s public statement reads as follows:

“According to the decision of the President of Ukraine and the order of the chief of the General staff of the military units of Ukraine, troops in the area of anti-terrorist operations ceased fire at 15.00 GMT.”

So while Obama is busy trying to ramp up the violence by rallying NATO to expand the wars around the world, international peacekeepers will begin the thorny task of implementing a seven-point peace plan put forward by none-other-than Vladimir Putin.

The difference between the peacemakers and the warmongers has rarely been as stark as it is today.

Comment: Unfortunately, Putin is dealing with Kiev, U.S., EU, NATO – part of the global pathocracy. If you want to understand what is going on in Ukraine, study ponerology:

Lobaczewski titled his book Political Ponerology, reclaiming for the use of science a word that means, in religious studies, “the study of evil, the nature of evil, the origin of evil, and evil in relation to the Divine Government.” It was this last subdivision of the definition that interested Lobaczewski, though his focus was on the study of evil in relation to what could be called normal human government inspired and motivated by conscience. Lobaczewski writes:

“In the author’s opinion, Ponerology reveals itself to be a new branch of science born out of historical need and the most recent accomplishments of medicine and psychology. In light of objective naturalistic language, it studies the causal components and processes of the genesis of evil, regardless of the latter’s social scope. We may attempt to analyze these ponerogenic processes which have given rise to human injustice, armed with proper knowledge, particularly in the area of psychopathology. Again and again, as the reader will discover, in such a study, we meet with the effects of pathological factors whose carriers are people characterized by some degree of various psychological deviations or defects.

Ponerology describes the genesis, existence, and spread of the macrosocial disease called evil. Its causes are traceable and can be repeatedly observed and analyzed. When humanity manages to incorporate this knowledge into its natural worldview, it will have defensive potential as yet unrealized. ” (Lobaczewski)

Global Pathocracy, Authoritarian Followers and the Hope of the World