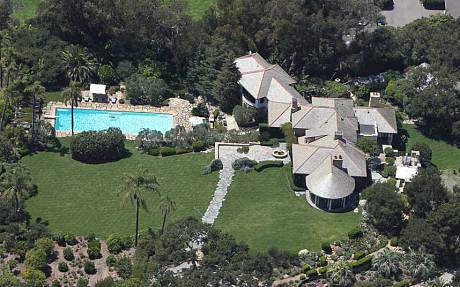 By Nick Allen, Montecito
The Telegraph

Lake Cachuma, the primary source of drinking water in Santa Barbara, Montecito, and other cities along California’s Central Coast, has dropped 50 feet and is at 35% capacity  Photo: GETTY

Nestled under the Santa Ynez mountains and cooled by the Pacific Ocean breeze, the billionaires’ bolt hole of Montecito, California, seems at first glance like a palm tree-strewn idyll.

Here, in one of America’s wealthiest post codes, celebrities including Oprah Winfrey, George Lucas, Rob Lowe, Kevin Costner and Ellen DeGeneres live alongside CEOs too numerous to mention in some of the world’s biggest and most outlandish homes.

But look a little closer and it is soon apparent there is trouble in this paradise: not even the likes of Miss Winfrey, it seems, can make it rain.

As California endures what the state’s governor Jerry Brown has called a drought of “epochal” proportions, lawns everywhere – including one at a five-acre property owned by the chat show queen – are scorched and gone to seed.

A polo field also lies unwatered and, according to locals, some owners of $10 million (£6.2 million) homes are eating off paper plates to avoid using their dishwashers.

In February the Montecito Water District imposed savage cuts on more than 10,000 residents. It announced overall water use would have to fall by 30 per cent or the town would run out in months. Big users saw their water allocation cut by up to 90 per cent.

Some residents continued to splurge water from sprinklers so the district levied millions of dollars in fines, eventually threatening to cut off completely those who have been hogging too much water.

In a desperate bid to save their manicured lawns and towering topiary, some of Montecito’s multi-millionaires have since been trying to out-spend nature by buying water in from outside.

The home of Tom Cruise in Montecito, California

Each morning at the crack of dawn, trucks laden with precious H₂O trundle down lanes towards parched estates.

The trucks are now a common sight in Montecito, passing by Sotheby’s International Realty and an haute couture clothes store. But the origin of the water is something of a mystery.

“I see the trucks every day. They’re like big gas trucks with a water sign on,” said Tori Delgado, who works in the Montecito wine and cheese shop. “But nobody knows where they’re getting it from.”

The water is likely being sold by private individuals elsewhere in California who have wells on their properties.

But wherever it comes from the buyers appear to be staving off the inevitable only temporarily, and many millionaires are turning to conservation instead. Miss Winfrey is prominent among them.

“Two months ago she just said, ‘Turn off the water’, and now there’s not a green blade of grass on that lawn,” a resident who has seen her parched garden told the Telegraph.

The Montecito Water District has so far banned the watering of gardens in the middle of the day, filling swimming pools at any time, and the building of new homes.

Meanwhile scores of angry residents have lodged appeals for more water. One asked for a supply to save 300 specimen trees – but was told the trees would have to die.

Tom Mosby, general manager of Montecito Water District, said: “People come to us and say ‘We want to build a swimming pool’ and we say ‘No’. If it doesn’t rain next year the state’s going to go dry. We are talking about a disaster movie in the making.”

About 80 per cent of Montecito’s water currently comes from Lake Cachuma, a once mighty reservoir 30 minutes drive away. Like many California reservoirs it is now surrounded by a giant white “bath tub ring”. Cachuma is more than two thirds empty.

Some are now adhering to Governor Brown’s call for people to flush the toilet less often. John Braid, 83, said: “I do that. Leave it for a day. You’re just wasting water.”

The drastic measures appear to be working. In August overall water use was down by 50 per cent on the same month last year.

That is largely due to the efforts of Montecitans like Larry Reiche whose allocation from the water district was cut by 60 per cent in February.

He ripped up 3,500 sq ft of lawn and replaced it with artificial turf, pulled out a dozen palm trees and turned off his fountains. Thirsty plants were replaced with cacti. Showers are down to five minutes. He also used infrared technology to find a leaking pipe.

Looking out at the beautiful, but increasingly brown, vista below, Mr Reiche said: “It doesn’t matter how much money you have, if you run out of water you’re screwed. It’s a great leveller.

“Gone are the days in California when you could throw water around. This is a desert and people have to realise if we run out of water it’s going to return to desert.”

Pat Nesbitt, who owns a 71-acre estate including a polo field, had his water allocation cut by 90 per cent. If he continued to use water at the same rate he was facing fines of $140,000 in a single month.

“We cut back. We don’t water anything any more,” he said. “The polo field is brown. We are still able to play but it doesn’t play as good.”

Several million dollars of landscaping has also not been watered. Mr Nesbitt accused the water district of “incompetence,” adding: “If they had done something before, we wouldn’t be facing these draconian restrictions.”

He trucked water in once but is now drilling his own well instead. Dozens of other Montecito residents have also applied to drill wells, which can cost up to $100,000 – and could eventually cause to the subterranean aquifers beneath their feet to run dry.

Mr Nesbitt said: “I’m getting five gallons a minute, eight hours a day out of it at the moment. Not much. Pray for rain, that’s the only solution.”

On the street near Miss Winfrey’s favorite restaurant, Trattoria Mollie, the talk is of little but the drought.

There are rumours of people sending laundry out of town to avoid water fines. Some residents are said to have painted their lawns green.

According to one story a resident’s poodle turned green after rolling in the paint.

“We don’t like the water trucks because they destroy our roads,” one woman complained. “My lawn’s brown but we just have to pray for rain.”

Meanwhile, a local newspaper advised residents not to waste water taking part in the Ice Bucket Challenge. “Think about how to re-use water,” it said. “Take a bucket’s worth from the pool and have it dumped on you in the pool.”