Russophobia in the West Russophobia in the West

When the banksters who run America set their sights on the newest designated enemy of democracy, without fail the assault is preceded by information operations to convince a clueless public of the target state’s burning hatred for “freedom.” Momentarily torn away from corporate entertainment spectacle, enlightened citizen-consumers will be fed phony news stories of atrocities,green-screened crisis coverage set to dramatic music, and helpful cues to identify heroes, victims and villains in the unfolding morality play. Washington is said to be Hollywood for ugly people, and the ugly people have proven remarkably adept at statecraft as stagecraft, selling their brand of international banditry as feel-good humanitarian uplift for decades now.

But just as Hollywood has lurched into creative senility, so too is the template for overseas intervention fraying as US global dominance enters its terminal phase. No longer yielding to “leadership” from the wolves of Wall Street, independent powers have begun to challenge the foundations of the Washington consensus. At the forefront of this movement has been a revived Russia, which in the face of NATO encirclement and with survival on the line, has shown itself willing and able to confront the Pax Americana. But the show must go on; as the United States positions forces ever closer toward Moscow’s frontiers, with furrowed brows and feigned concern, the talking heads on our telescreens mechanically inform us of Russian aggression. It’s springtime again for Russophobia in the West. 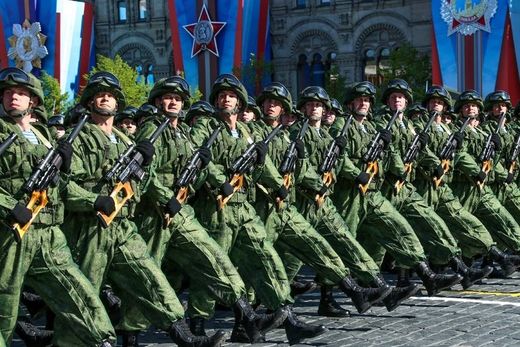 With its roots in the Great Game of espionage and intrigue between Victorian subalterns and the Tsar’s Cossacks in Central Asia, a systemic antipathy to Russia as such only took root in America from the time it assumed Britain’s imperial mantle at the dawn of the Cold War. The hostility, of course, has been mutual, andRussians have not forgotten how their land suffered through the “peace dividend” of US unipolarity in the 1990s. Promised that the North Atlantic alliance would never contemplate expanding eastward, Mikhail Gorbachev starred in pizza commercials and Boris Yeltsin headlined summits with his trademarkvodka-soaked buffoonery. It was then that a weakened, bankrupt Russia could be looted by multinationals, its people impoverished and demoralized, and the state further subverted by forces from “civil society” NGOs to cutthroat jihadist mercenaries waging holy war in the North Caucasus.

Those days of humiliation are over, and that’s what has Washington worried.During his 15 years of “authoritarian” rule, Russia’s President Vladimir Putin set his country on a new path after a disastrous post-Soviet decline. Early on he thwarted the ambitions of oligarchs and regional separatists; since then he has moved to counter US/NATO plans for controlling Eurasia and its energy transit networks. This struggle has played out through espionage, color-coded revolutions, pipeline double-crosses and proxy wars. After a naval task force dispatched by Moscow effectively deterred the West from bombing Syria in 2013, US foreign policy planners decided to upend Russian resurgence through a quick and dirty route to destabilization: Ukraine.

By orchestrating a coup in Kiev in February of this year, American strategists were gambling on the seizure of Crimea, home to the Black Sea Fleet. Sevastopol in NATO hands would have drastically curtailed Russian influence in the Eastern Mediterranean while ensuring Russian vulnerability to US missile defense and first strike assets. Moscow’s hold on the North Caucasus (and even the Volga Basin) would also inevitably come under challenge, given Washington’s history of generating chaos through webs of foundations and aid agencies. Due toPutin’s quick action, instead of evicting the Kremlin from Crimea, the State Department and CIA unwittingly played catalyst to the peninsula’s reunion with its historical motherland. This bloodless victory constituted an intolerable affront to the vanity of America’s policy elites, sending their demonization campaign into overdrive.

For leading Russia’s return to prominence and refusing to bow to US pressure, Vladimir Putin has been made the focal point of this propaganda barrage. Any enemy of the “international community” (globalist plutocrats speaking through political ventriloquist dummies) must be cast as evil incarnate, which for contemporary man translates first and foremost to one name: Adolf Hitler. As if on cue, former Secretary of State Hillary Clinton – the woman who demanded that her husband cluster-bomb Serbia as an act of righteousness – ordained the Crimea crisis as a reprise of the Sudetenland.

Now if this sounds familiar, it’s what Hitler did back in the 30s … All the Germans that were … the ethnic Germans, the Germans by ancestry who were in places like Czechoslovakia and Romania and other places, Hitler kept saying they’re not being treated right. I must go and protect my people and that’s what’s gotten everybody so nervous.

Other figures from the unbalanced John McCain to Prince Charles also joined in to label Putin as “another Hitler” for daring to defy the New World Order. Running afoul of American geopolitical designs triggers the Reductio ad Hitlerummechanism – it’s a multipurpose tool of manipulation used against public opinion and handy for practically any occasion. Thus Gamel Abdel Nasser; Fidel Castro; the Ayatollah Khomeini; Manuel Noriega; Saddam Hussein; Slobodan Milosevic; Kim Jong-Il; Mohamar Gaddafi; and Bashar al-Assad, to name just a few, have all been affixed with the Austrian corporal’s toothbrush mustache of infamy when it suited US objectives. In comparing Putin with Hitler, the most genocidal Russophobe to walk the earth, the limits of absurdity stretch still further. Since he resolutely opposes the Western oligarchy mastering Russia and all of Eurasia, a dream shared by a certain twentieth-century Reichskanzler, Putin is by some wonder of logic akin to Hitler. Here’s a helpful checklist to demonstrate the similarities:

The impediment of Western expansion across Europe, Africa, Asia, and South America is framed as “aggression” just as Adolf Hitler did in regards to nations chaffing against expanding Nazism during the 1930’s.

A strange reality comes into focus amidst endless inane Hitler rhetoric deployed in the service of universal conquest: more than any other deity in its pantheon, the liberal order needs Hitler for its continued existence. Leave aside the fact that Anglo-American financial elites underwrote the Führer‘s rise to power, or the inconvenient story of Project Paperclip. Even if only for a moment, look past ongoing US sponsorship of Ukraine’s neo-fascists, the direct heirs to the 14th Waffen-SS Division Galizien, who have been pulverizing Donetsk and Lugansk with artillery to fulfill IMF loan conditions and clear the Russian east for shale drilling by Exxon-Mobil and Royal Dutch Shell. Beyond all this, Hitler is secretly the Postmodern Imperium’s most valued ally, a dark totem wielded to exact psychological compliance from the nations of the West both in aggression abroad and in their very own dissolution.

In decadent madness the Pax Americana seeks to subjugate Russia, yet its advance is the same rush toward ignominy of Napoleon’s Grande Armée or Hitler’s fearsome Wehrmacht. Atlanticist elites fear not only Russian power, but the liberating potential of an ancient Russian ideal articulated by legendary thinkers likeFyodor Dostoevsky: traditional faith instead of sectarian extremism or materialist fanaticism; national and ethnic solidarity instead of either toxic chauvinism or corrosive cosmopolitanism; and a just sovereignty instead of our pleasure-dome police state. Rediscovery of these principles can move entire peoples toward nobility and sanctity, affording them true freedom and a fighting chance to smash the cult of Mammon.