ISIS, ISIL & IS ARE CREATIONS OF US, UK & ISRAEL 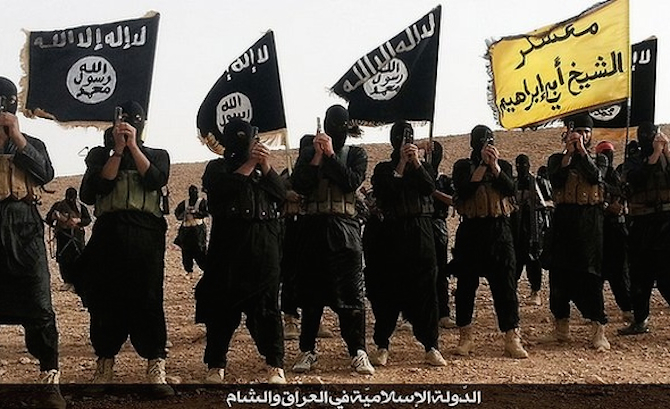 “Going After” the Islamic State. Guess Who is Behind the Caliphate Project? The Islamic State (IS) is portrayed as an Enemy of America and the Western world.

With the support of America’s indefectible British ally, President Barack Obama has ordered a series of US bombing raids on Iraq allegedly with a view to defeating the rebel army of the Islamic State (IS).

“We will not waver in our determination to confront the Islamic State … If terrorists think we will weaken in the face of their threats they could not be more wrong.” (Barack Obama and David Cameron, Strengthening the NATO alliance, op ed published in the London Times, September 4, 2014, emphasis added)

But Who is behind the Islamic State Project?

In a bitter irony,  until recently the rebels of the Islamic State, formerly known as the Islamic State of Iraq and the Levant (ISIL) were heralded as Syria’s “opposition freedom fighters” committed to “restoring democracy” and unseating the secular government of Bashar al Assad.

And who was behind  the jihadist insurgency in Syria?

Those who ordered the bombing campaign are those who are behind the Caliphate Project.

The Islamic State (IS) militia, which is currently the alleged target of  a US-NATO bombing campaign under a “counter-terrorism” mandate, was and continues to be supported covertly by the United States and its allies.

In other words, the Islamic State (IS) is a creation of US intelligence with the support of Britain’s MI6, Israel’s Mossad, Pakistan’s Inter-Services Intelligence (ISI) and Saudi Arabia’s General Intelligence Presidency (GIP), Ri’āsat Al-Istikhbārāt Al-’Āmah ( رئاسة الاستخبارات العامة‎). Moreover, according to Israeli intelligence sources (Debka) NATO in liaison with the Turkish High Command has been involved in the recruitment of jihadist mercenaries from the outset of the Syrian crisis in March 2011.

In relation to the Syrian insurgency, the Islamic State  fighters together with the Al Qaeda affiliated jihadist forces of the Al Nusrah Front are the foot soldiers of the Western military alliance. They are covertly supported by US-NATO-Israel. Their  mandate is to wage a terrorist insurgency against the government of Bashar al-Assad. The atrocities committed by Islamic State fighters in Iraq are similar to those committed in Syria.

As a result of media disinformation, Western public opinion is unaware that the Islamic State terrorists have from the very outset been supported by the United States and its allies.

The killings of innocent civilians by the Islamic State terrorists in Iraq are used to create a pretext and a justification for US military intervention on humanitarian grounds.  The bombing raids ordered by Obama, however, are not intended to eliminate the Islamic State, which constitutes a US “intelligence asset”. Quite the opposite, the US is targeting the civilian population as well as the Iraqi resistance movement. The Role of Saudi Arabia and Qatar

Amply documented, US-NATO support to the Islamic State is channeled covertly through America’s staunchest allies: Qatar and Saudi Arabia. Acknowledged by the Western media, both Riyadh and Doha acting in liaison and on behalf of Washington have played (and continue to play) a central role in the financing the Islamic State (IS) as well as the recruitment, training and religious indoctrination of terrorist mercenary forces deployed in Syria.

According to London’s Daily Express “They [the Islamic State terrorists] had money and arms supplied by Qatar and Saudi Arabia.” “The most important source of ISIS financing to date has been support coming out of the Gulf states, primarily Saudi Arabia but also Qatar, Kuwait and the United Arab Emirates,” (According to Dr. Günter Meyer, Director of the Center for Research into the Arabic World at University of Mainz, Germany,  Deutsche Welle)

This money was channeled to ISIS terrorists fighting against government forces in Syria:

“Through allies such as Saudi Arabia and Qatar, the West [has] supported militant rebel groups which have since mutated into ISIS and other al‑Qaeda connected militias. ( Daily Telegraph, June 12, 2014)

According to Robert Fisk, the IS caliphate project “has been bankrolled by Saudi Arabia”:

…[M]eet Saudi Arabia’s latest monstrous contribution to world history: the Islamist Sunni caliphate of Iraq and the Levant, conquerors of Mosul and Tikrit – and Raqqa in Syria – and possibly Baghdad, and the ultimate humiliators of Bush and Obama.

From Aleppo in northern Syria almost to the Iraqi-Iranian border, the jihadists of Isis and sundry other groupuscules paid by the Saudi Wahhabis – and by Kuwaiti oligarchs – now rule thousands of square miles. (Robert Fisk, The Independent,  June 12, 2014

In 2013, as part of its recruitment of terrorists, Saudi Arabia took the initiative of releasing prisoners on death row in Saudi jails.

A secret memo revealed that the prisoners were being “recruited” to join jihadist militia (including Al Nusrah and ISIS) to fight against government forces in Syria.

The prisoners had reportedly been offered a deal — stay and be executed or fight against Assad in Syria. As part of the deal the prisoners were offered a “pardon and a monthly stipend for their families, who were allowed to stay in the Sunni Arab kingdom”.

On September 11, 2014, coinciding with the commemoration of 9/11, the King of Saudi Arabia together with the Monarchs of the Gulf States announced their unbending commitment to support Obama’s holy war against the Islamic State (IS), which has and continues to be funded by Qatari and Saudi money as part of a carefully engineered intelligence operation.

Saudi Arabia and the Gulf  States which actively contributed to the financing of the Islamic State, not to mention the recruitment, training of terrorists on behalf of Washington, pledged their unbending support for Obama’s military campaign to “degrade and ultimately destroy” the Islamic State.

The statement of  support contained in the communiqué, commits the “leading Arab states to working with the U.S. to cut off the flow of foreign fighters and funds to the Islamic State.” It also confirms that members discussed  “a strategy to destroy the ISIL wherever it is, including in both Iraq and Syria.”

Saudi Arabia has come to understand the Islamic State group is a serious threat to their country as well– that it isn’t a mainstream Sunni movement.One element of Obama’s IS plan seeks to undermine the ideological and religious claims that the Islamic State militants make to Islam.

The administration hopes Riyadh will use its influence among Islamic religious leaders. (Voice of America, September 11, 2014)

As part of the agreement, the House of Saud is to “host a training facility for thousands of Syrian rebel fighters who are combating both the Islamic State and President Bashar al-Assad’s regime.” An absurd and fake proposition.  Until September 9th, “officially” Saudi Arabia had been supporting the Islamic State against the government of Bashar al Assad and now it has been entrusted in recruiting jihadists to fight the Islamic State. An  absurd and fake proposition. But the media has failed to connect the dots and uncover the big lie.

We are dealing with a diabolical project:  The architects of the Islamic State have informed the World that they are “going after” their own terrorists as part of a counter-terrorism operation.

While these actions are undertaken under the banner of the “Global War on Terrorism”, the US has no intention to target its IS own terror brigades which are integrated by Western special forces and intelligence operatives. In fact the only meaningful and effective campaign against Islamic State terrorists is being waged by Syrian government forces.

Needless to say, US, NATO, Saudi and Qatari support and funding to the Islamic State will continue. The objective is not to destroy the Islamic State as promised by Obama. What we are dealing with is a US sponsored process of destabilizing and destroying both Iraq and Syria. The campaign against the Islamic State is being used as a justification to bomb both countries, largely targeting civilians.

The endgame is to destabilize Iraq as a nation state and trigger its partition into three separate entities.