IRS says it has lost emails from 5 more employees IRS says it has lost emails from 5 more employees

WASHINGTON (AP) — The Internal Revenue Service has lost emails from five more employees who are part of congressional probes into the treatment of conservative groups that applied for tax-exempt status, the tax service disclosed Friday.

The IRS said in June that it could not locate an untold number of emails to and from Lois Lerner, who headed the IRS division that processes applications for tax-exempt status. The revelation set off a new round of investigations and congressional hearings.

On Friday, the IRS issued a report to Congress saying the agency also lost emails from five other employees related to the probe, including two agents who worked in a Cincinnati office processing applications for tax-exempt status.

The disclosure came on the same day the Senate’s subcommittee on investigations released competing reports on how the IRS handled applications from political groups during the 2010 and 2012 elections.

The IRS inspector general set off a firestorm last year with an audit that said IRS agents singled out tea party and other conservative groups for inappropriate scrutiny when they applied for tax-exempt status.

Lerner’s lost emails prompted a new round of scrutiny by Congress, the Justice Department, the inspector general and at least two federal judges.

The IRS blamed computer crashes for all the lost emails. In a statement, the IRS said all the crashes happened well before Congress launched its investigations.

The IRS first told Congress in June that other employees involved in the probe also had computer problems. At the time, IRS Commissioner John Koskinen promised lawmakers a report on whether any had lost emails. The report was issued Friday.

“Throughout this review, the IRS has found no evidence that any IRS personnel deliberately destroyed any evidence,” said the IRS statement. “To the contrary, the computer issues identified appear to be the same sorts of issues routinely experienced by employees within the IRS, in other government agencies and in the private sector.”

When Congress started investigating the IRS last year, the agency identified 82 employees who might have documents related to the inquiries. The IRS said 18 of those people had computer problems between September 2009 and February 2014. Of those employees, five probably lost emails — in addition to Lerner — the agency said Friday. 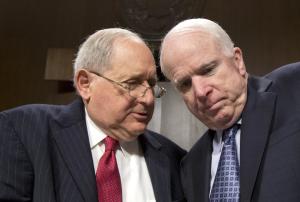 Lerner, who was placed on leave and has since retired, has emerged as a central figure in congressional investigations. The other five employees appear to be more junior than she.

In addition to the Cincinnati workers, they include a technical adviser to Lerner, a tax law specialist and a group manager in the tax-exempt division.

In general, the IRS said the workers archived emails on their computer hard drives when their email accounts became too full. When those computers crashed, the emails were lost.

“By all accounts, in each instance the user contacted IT staff and attempted to recover his or her data,” said the IRS statement.

The IRS has said it stored emails on backup tapes but those tapes were re-used every six months. The inspector general’s office is reviewing those tapes to see if any old emails can be retrieved.

“The IRS has lost thousands of emails, but worse yet, completely lost the American people’s trust,” said Sarah Swinehart, a spokeswoman for House Ways and Means Republicans. “The DOJ must appoint a special prosecutor so the full truth can come out.”

Friday’s reports by the Senate subcommittee on investigations mark the conclusion of just one investigation. The Justice Department and three other congressional committees are continuing their probes.

Levin is chairman of the investigations subcommittee and McCain is the ranking Republican. Their staffs routinely work together on investigations, and while they don’t always agree on the results, it is highly unusual for them to issue such diverging reports.

“The investigation found that the IRS used inappropriate selection criteria, burdensome questions and lengthy delays in processing applications for 501(c)(4) tax exempt status from both conservative and liberal groups,” Levin said in a statement.

The Democratic report slams last year’s audit by the IRS inspector general. It says the IG report was incomplete because it focused only on the treatment of conservative groups. The IG’s report “produced distorted audit results that continue to be misinterpreted,” the Democratic report said.

“I firmly stand behind the audit report that we issued last year, showing the inappropriate treatment of applicants for 501 (c)(4) status, for which the IRS apologized,” George said in a statement. “It is important to remember that the IRS accepted all of the recommendations contained in our audit report.”

McCain’s Republican report says far more conservative groups were singled out for extra scrutiny. They were also asked more questions and were more likely to have their applications rejected or withdrawn.

“The IRS selected conservative groups out of normal processing, placed them on a separate list, stopped work on their applications completely, forced them to answer intrusive questions about their behavior and demeanor at meetings and delayed their applications for multiple years,” the Republican report said. “Our investigation has uncovered no evidence that liberal groups received the same expansive inappropriate treatment that conservative groups received.”

The Democratic report said investigators reviewed 800,000 pages of documents and conducted 22 interviews with current and former workers at the IRS and the inspector general’s office. The investigators, however, were not allowed to see confidential taxpayer information, so many of the documents were blacked out.

Only two committees in Congress have the authority to see confidential taxpayer information: the House Ways and Means Committee and the Senate Finance Committee. Those two committees are continuing their probes.