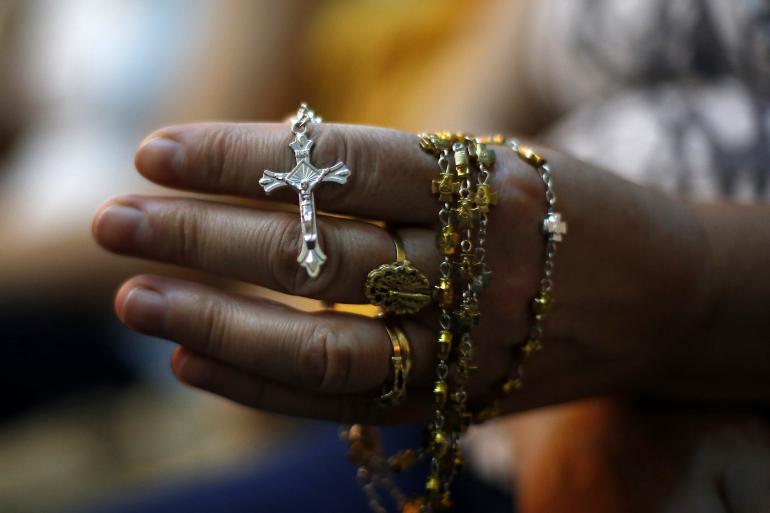 By MATTHEW BLAKE FOR MAILONLINE Under fire: King Abdullah has been widely criticised for his country’s intollerance of religious minorities

Islamist police in Saudi Arabia have stormed a Christian prayer meeting and arrested its entire congregation, including women and children, and confiscated their bibles, it has been reported.

The raid was the latest incident of a swingeing crackdown on religious minorities in Saudi Arabia by the country’s hard-line Commission for the Promotion of Virtue and Prevention of Vice.

The 28 Christians were said to be worshipping at the home of an Indian national in the eastern city of Khafji, when the police entered the building and took them into custody. They have not been seen or heard from since, raising concerns among human rights groups as to their whereabouts.

Nina Shea, director of the Washington-based Hudson Institute’s Center for Religious Freedom, told FoxNews.com: ‘Saudi Arabia is continuing the religious cleansing that has always been its official policy.

‘It is the only nation state in the world with the official policy of banning all churches.

‘This is enforced even though there are over two million Christian foreign workers in that country. Those victimized are typically poor, from Asian and African countries with weak governments.’

Activists are now calling on the U.S. to use its considerable influence in the region to help secure the release of the incarcerated Christians.

A spokesperson for the Saudi government claimed to have no knowledge of the arrests, according to Fox News.

But the English-language newspaper, The Saudi Gazette, as well as several Saudi Arabic-language news outlets, have reported on the arrests.

Arabic-language news channel, Akhbar 24, said the arrests came after the Kingdom’s religious police got a tip about a home-based church.

The report also reported that ‘distorted writings of the Bible were found and musical instruments, noting their referral to the jurisdictional institutions.’

At least 3.5 million Christians live in the Gulf Arab region, mostly Catholic workers from India and the Philippines.

In Saudi Arabia, the birthplace of Islam, it is against the law for Muslims to abandon their faith, a practice known as apostasy. Proselytising for other religions or practising them openly is also illegal.

Judges have considerable leeway in how to interpret the kingdom’s Sharia code of Islamic law and are not bound by sentencing guidelines or a system of precedent. Both capital and corporal punishment are legal.

Last year King Abdullah, who has promoted limited reforms since coming to the throne in 2005, opened a centre for religious dialogue in Vienna that drew criticism because of Saudi Arabia’s own lack of religious freedom. In 2008 he sponsored an inter-faith conference in Spain.

‘Locked up’ Saudi princesses give a message to Barack Obama…