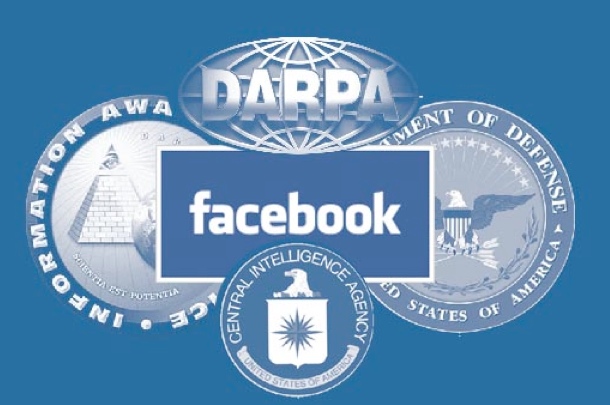 By End the Lie

The fact that this is surprising to people is beyond all comprehension. This technology has been under development since Facebook took on massive funding from CIA/NSA connected firms. Of course this is brushed off by the corporate special interest media.

This is dismissed as conspiracy theory, mainly because the funding didn’t come directly from In-Q-Tel, the venture capital firm established by the Central Intelligence Agency back in 1999. How can any self-respecting journalist assert that the CIA would directly and openly fund a covert domestic surveillance and data mining project? This just isn’t how it works.

Global Research makes it pretty evident that these links are not all that tenuous.

“Facebook’s first round of venture capital funding ($US500,000) came from former Paypal CEO Peter Thiel. Author of anti-multicultural tome ‘The Diversity Myth’, he is also on the board of radical conservative group VanguardPAC.

The second round of funding into Facebook ($US12.7 million) came from venture capital firm Accel Partners. Its manager James Breyer was formerly chairman of the National Venture Capital Association, and served on the board with Gilman Louie, CEO of In-Q-Tel, a venture capital firm established by the Central Intelligence Agency in 1999. One of the company’s key areas of expertise are in “data mining technologies”.

Breyer also served on the board of R&D firm BBN Technologies, which was one of those companies responsible for the rise of the internet.

Dr Anita Jones joined the firm, which included Gilman Louie. She had also served on the In-Q-Tel’s board, and had been director of Defence Research and Engineering for the US Department of Defence.

She was also an adviser to the Secretary of Defence and overseeing the Defence Advanced Research Projects Agency (DARPA), which is responsible for high-tech, high-end development.”

Two members of In-Q-Tel’s board who directly involved in data mining technologies and the Information Awareness Office of the Defense Advanced Projects Research Agency, better known as DARPA, directly provided the most major funding that launched Facebook into what it is today.

Sarcasm aside, I think you really must purposefully ignore the majority of the evidence if you are to think that Facebook has no ties with the government and that they are not utilized as a massive domestic intelligence gathering system. The fact is that the links between intelligence agencies and Facebook is undeniable and the rationale between the ties is equally irrefutable.

Why wouldn’t a branch of the government who openly wants to gather every single bit of information about every single American citizen invest heavily and take control of a system like Facebook in which citizens voluntarily frame their faces in squares for ease of facial recognition while choosing to disclose their intimate details and thoughts. Not to mention the fact that people actually use the website to “check in” places, creating a wonderful outline of activity and habits, or the ability to run a script that scrapes, analyzes, and assimilates every single communication and friend link creating an in-depth intelligence file that would otherwise take warrants and months of surveillance to compile.

Facial recognition technology has been under development since at least 1964, although it would be ignorant to think that there were not highly secretive government research programs occurring before this. In fact, this project itself was funded by an “unnamed intelligence agency” however, they allowed some of the research to be published. If this were a completely black project there would be no publishing of any data whatsoever. Therefore, we can conclude that this technology has been consistently refined and improved over at least 47 years.

The fact is that Facebook controls what is arguably the largest database of pictures of people from around the world, most of which are tagged by name, associated with a date, and have meta tag information with GPS coordinates, camera model and settings, etc. With the open implementation of the advanced facial recognition technology, they are simply confirming the fact that this database has been built around this purpose since day one.

The European countries seem to be much more active in investigating companies for massive privacy infringement, while the American government relishes such invasions of privacy. Will the European regulators be able to actually do anything? I doubt it. This is essentially the equivalent of a few Congressmen or Senators trying to investigate Facebook or Google. Sure they’ll entertain their whimsies far enough so the American people still hold on to the delusion that our representatives do anything, but no real investigation will take place.

For instance, last year Google came under heavy fire from individuals in the United States and Europe for stealing personal information over Wi-Fi through their Google Street View cars. The Register reported, “Germany’s Federal Commissioner for Data Protection Peter Schaar says he’s “horrified” by the discovery. […] “I am appalled… I call upon Google to delete previously unlawfully collected personal data on the wireless network immediately and stop the rides for Street View,” according to German broadcaster ARD.”

While the German Federal Commissioner for Data Protection wasn’t scared to use stern language in rebuking this naked illegal invasion of privacy, the United States government was silent as per usual. This violation of privacy was not isolated to Europe, in fact a class action lawsuit was filed against Google for these breaches in Oregon. Yet, our supposed representatives idly twiddled their thumbs and sucked on the teats of corporate lobbyists.

CNET reported, “So far the U.S. government hasn’t announced an investigation into Google’s practices, but Congressional leaders are asking the Federal Trade Commission to get involved. On Wednesday, Reps. Ed Markey, a Massachusetts Democrat, and Joe Barton, a Texas Republican, sent a letter to the head of the FTC.”

Clearly a great deal of change came out of these actions as Google has just pressed on with their data mining and Facebook has obviously never relented in their efforts either.

The Financial Times reports the following on this most recent public roll-out of the facial recognition technology,

“In the US, a number of privacy groups have been asked to back a complaint to the Federal Trade Commission in the US being organised by the Electronic Privacy Information Centre, which also led a 2009 protest against the company, according to people contacted about the matter.

Facebook said that it was in talks with European regulators but said that it did not believe the facial recognition feature posed privacy concerns.

“We have heard the comments from some regulators about this product feature, and we are providing them with additional information which we are confident will satisfy any concerns they will have,” Facebook said.

After protests started this week, Facebook hurried to update an earlier blog post to disclose the international roll-out of the feature and to admit it should have handled the process differently.

“We should have been more clear with people during the roll-out process when this became available to them,” Facebook said in a statement on Tuesday.”

Well as long as they apologize, who can hold them at fault for creating the world’s largest facial recognition database without anyone’s consent? Who can blame them for retaining every single picture, message, search, conversation, or friend request even if you attempt to cancel your account?

It is sad to say that once you’re in Facebook’s grasp, there is no escape. After all, you shouldn’t care about privacy unless you have something to hide, right?
Read more at http://endthelie.com/2011/06/09/darpa-funded-facebook-under-fire-from-euro-regulators-for-revealing-massive-facial-recognition-database/#PSSbXHHOfjTebz5J.99