The vulture funds that corner Argentina also come for Spain 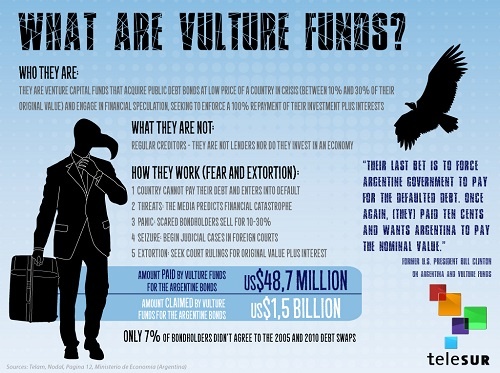 The vulture funds that corner Argentina also come for Spain

“Vulture funds” refer to companies that buy insolvent debts for a song and later try to cash in on them by force. Billionaire Paul Singer has made it his specialty. Today he is intent on consolidating his fortune at the expense of the Argentinian people, while already setting his sights on Spain. Zionist billionaire Paul Singer is the main Republican Party donor. He is particularly committed to supporting militarism and gays.

The vulture fund NML Capital that, together with others, has Argentina on the edge of suspending payments, is already devouring the rotting flesh of the Spanish market. Elliott Management, the opportunistic fund of the serial U.S. speculator Paul Singer, has already pocketed a billion euros of Bankia’s failed credit and 300 million euros of Santander. It is estimated that it has paid hardly 50 million for both these portfolios, according to Auraree.com.

In March 2013, the Spanish financial press informed that Elliott had acquired from the Santander Group a portfolio of 300 million euros of defaulting credit of Santander Consumer Finance with a discount approaching 96%. The price that was paid was laughable: about 12 million euros, according to Cinco Dias.

Elliott had acquired from the Santander Group a portfolio of 300 million euros as defaulting consumer credit of Santander Consumer Finance.

In August of the same year, 2013, Bankia, the nationalised entity that most benefited from the rescue of the Spanish banks, which had considerably raised the public debt, informed that three portfolios of bad credit had been sold for a total debt volume of 1,353.9 million euros. In the relevant communication to the CNMV (National Stock Market Commission), it was not mentioned to whom the loans had been sold to or at what price. Despite the evident lack of transparency, the financial press has put names and numbers to the operation, which it is estimated “may have a discount of 95%”. The buyers of the three portfolios were the vulture fund Cerberus, which is advised by José Maria Aznar Jr, the son of the former President, Elliott and the Norwegian recovery business, Lindorff. “The portfolio was valued at 1,354 million but only forked out 68,” according to Finanzas.com. We have been in contact with Bankia for confirmation from the other side and its response has been that “for confidentiality” they never give the number and “the buyers who do not want to be identified”.

A few months later, it emerged that Elliott bought the household debt recovery firm Gesif to convert it into his operational base for the Spanish market. Its director-general was Melania Sebastián, who was in charge of information management at the Banca Comercial de Caja Madrid, who will continue with the moneylenders of Gesif. It is worth noting how a former director of Caja Madrid acts as the intermediary between the nationalised Bankia and Elliott’s vulture fund.

What happened in Argentina

The vulture funds make money taking advantage of countries in difficulties, like Argentina during the crisis of 2001, to buy debts cheap. Later they wait for an opportune moment to oblige them to buy them back at a much higher price with court orders, including deferred interests and judicial costs.

This is how they speculate on public debts, endangering the social spending that benefits the great majority of the population. These vultures went for lawsuits after having refused to form a part of the 93% of creditors who accepted the exchange with the government. Now the New York district judge, Thomas Griesa, has prioritised the payment of the vulture funds, which opens the door to an avalanche of demands that could result in the suspension of payments in Argentina on July 30. As Julio C. Gambina puts it so well, “nobody precisely knows where the demands of the creditors could reach of the unpayable debt”, but we know that the cost for the Argentinean people could be catastrophic.

Who are behind these vulture funds? NML Capital is a subsidiary of the inversion fund, Elliott Management Corporation, registered in the fiscal paradise Cayman Islands. It is the empire of Paul Singer, the multimillionaire champion of the U.S. Republican Party and close to the Tea Party.

Elliott speculates, among other things, with public debts, violating the sovereignty of the states and its peoples. But he also speculates with private debts and in 2011 came to possess two million dollars of Lehman Brothers.

Singer was the major financier of the presidential campaign of George W. Bush in 2004; he also contributed to Mitt Romney’s campaign in 2012 and to that of the New York mayor, Rudolph Giuliani. Moreover, he is the major private financier of the New York police. As one of the principal financiers of the Republican Party, he plays an important part in the U.S. politics and, therefore, also in international politics.

The foundation that bears his name, The Paul E. Singer Foundation, praises him for his philanthropy, his leadership in the expansion of free trade, his contribution to the U.S. national security and for the “future of Israel”. Moreover, Singer is president of the Manhattan Institute for Policy Research [1].

The frigate is not for handing over or for sale

Regarding the Argentinean case, NML is the principal financier of the organisation, American Task Force Argentina (AFTA), a lobby that influences the Congress and the U.S. justice, harming Argentina. To give ourselves an idea of the power of these vultures, NML could even embargo the Argentinean frigate, Liberty, in Ghana in October 2012, demanding the Argentinean state for about $370 million for unpaid bonds.

Enough of vultures: Argentina united for a national cause

What is happening in Argentina is emblematic of what Greece is starting to feel where vultures like Dart Management operate, with its headquarters in Cayman Island and which also operates in Latin American countries. In 1999, NML achieved, through a ruling in the United States, the payment from Peru of $58 million for a debt that the fund had bought for $11 million. It also did business with the Democratic Republic of Congo.