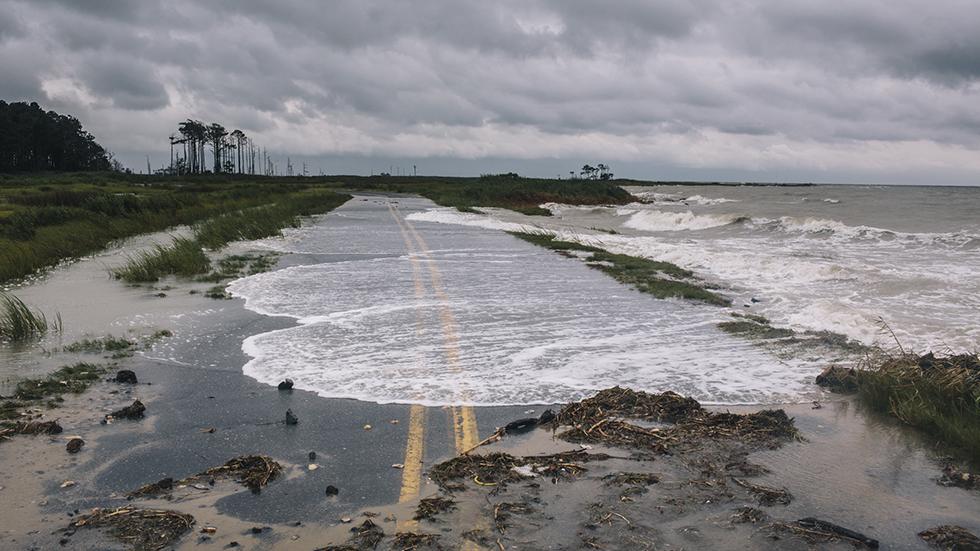 Three millimeters, about one-eighth of an inch, may not sound like much. But when it’s the height water is steadily rising outside your doorstep every year, it may as well be three feet if it’s anything at all.

On the eastern shores of Maryland, ocean levels are climbing by at least this much — nearly two times the global historic average, according to the state’s Department of Natural Resources — and those waters are pushing several small fishing communities to the brink of extinction. Photographer Greg Kahn set out to capture what it’s like for these sinking towns in his new series “3 Millimeters.”

“The most I had heard [about sea-level rise] was ice caps and glaciers melting and things that were all happening far away that didn’t really connect with American soil,” he told weather.com. “This was real life being affected by sea-level rise…. It had reached our shores. This was no longer something far off in the distance.”

Two years ago, Kahn went to places like Crisfield, Maryland, once considered the seafood capital of the world, now losing new generations of watermen as crab and oyster populations diminish and as water slowly but steadily creeps closer to their homes. “One gentleman I spoke to this weekend said for his entire family history, all he’s known are watermen. He’s now looking to go into another profession because it’s not worth it for him. And he’s 18 years old,” Kahn said. “There’s this huge historical lineage that goes back as far as any of them know. And now that cycle is starting to break.”

“My concentration,” he continued, “is to show the environmental concerns based on sea-level rise and what could be happening as a result. It’s not to sound alarmist, to send people running for the hills, not to say a hurricane’s approaching. It’s to make people aware that this is a significant issue and this is going to have longer-term effects than [one] storm.”

(MORE: 32 Powerful Photos of the World Feeling the Impact of Climate Change)

Some of those who Kahn met along his journey don’t believe climate change is to blame for their current predicament. They understand change is afoot, but give other reasons: maybe it’s sea-level rise, or perhaps it’s erosion or simply the land sinking. Kahn said it’s not his job to try to change people’s minds — he believes sea-level rise is happening — but instead to document the community and how it’s changing.

Those shifts are visible in the impassible, waterlogged road and the altered border of Blackwater National Wildlife Refuge. And they’re visible on the faces of people like Holly Summers (in the slideshow above) whose 130-year-old home still sits atop water that flowed in from Hurricane Sandy nearly two years ago. For reasons unknown to Kahn, the story of these little towns on Maryland’s shoreline haven’t gotten as much attention as, say, Miami. Maybe they’re not as dramatic, he surmises, but they’re still powerful.

He hopes they stir people to action, that his pictures make people think, perhaps act a visual reminder that an abstract concept like sea levels rising actually impacts real people in this lifetime. “Once that land is gone, once that history is gone,” he said, “once you lose that, once it goes underwater, it’s gone.”