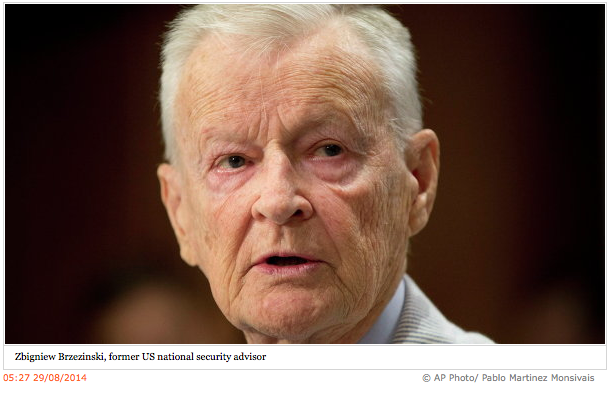 MOSCOW, August 29 (RIA Novosti) – Daniel Zubov, a columnist from the Center for International Journalism and Research, revealed how the children of a well-known former US national security advisor and Russophobe Zbigniew Brzezinski were re-working Cold War approaches and applying them to current geopolitical conditions.

According to Zubov, Brzezinski’s sons Mark and Ian are actively promoting NATO enlargement. Given the pretext of Russian’s resent actions, these brothers have tried to persuade other states to join the military alliance, increase defense budgets, and play an active role in Ukraine’s ongoing domestic conflict.

Mark Brzezinski has been Ambassador to Sweden since November, 2011 and has been urging the country to join the alliance. Although Sweden has not become a NATO member yet, Brzezinski has managed to involve it in joint military exercises in Finland, Ukraine and Lithuania.

Meanwhile, Ian Brzezinski, who held the role of Deputy Assistant Secretary of Defense for European and NATO Policy in the Bush administration, is no less hawkish: he co-authored “NATO’s Crucial Summit” for CNN, which urges NATO to provide Ukraine with “lethal military assistance” and resume military exercises with the country. Ironically enough for a former George W. Bush administration defense department official, he resorts to shaming Russia for the Soviet Union’s role in Afghanistan.

Zbigniew served as Jimmy Carter’s National Security Advisor between 1977 and 1981. He was raised by his anti-Russian father, Tadeusz Brzezinski, who fought the Soviet Red Army in the final Warsaw campaign of 1920 and later held public office in Nazi Germany as Consul General in the city of Leipzig from 1931 to 1935.