Pakistan Opposition Leader Slams US: Nation Will No Longer Be A Slave 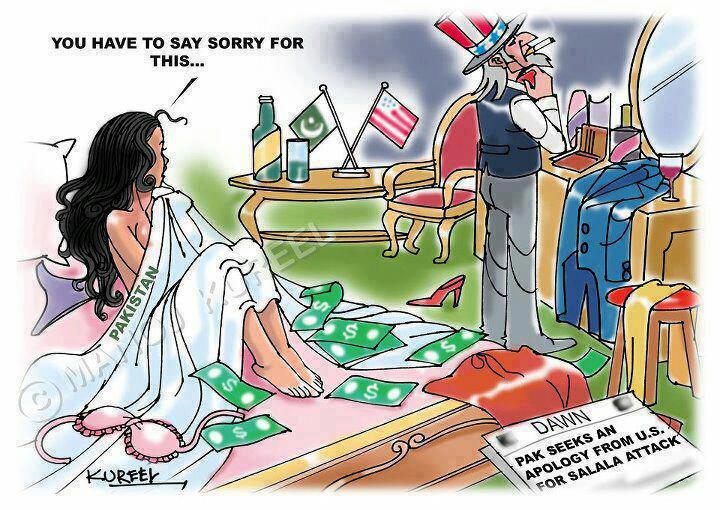 Pakistan Opposition Leader Slams US: “You Like Only Those Governments In Muslim Countries That Are Your Slaves”

It is no secret that of all geopolitical crises in the past 5 years, the US has been the instrumental puppetmaster in virtually all of them: from Libya, to Egypt, to Syria, to Ukraine (“US Revealed As Alleged Mastermind Behind Ukraine Unrest“), even the ISIS insurrection in Iraq whose success would have been impossible without prior US weaponizing of al-Qaeda splinter groups in neighboring Syria. And now it appears the US has found yet another country for its “intelligence services” to alienate.According to go the WSJ, the leader of protests against Pakistan’s Prime Minister Nawaz Sharif lashed out at the U.S. Thursday, accusing Washington of interfering in the country’s political crisis.

As a reminder, the nuclear-armed country neighboring India is currently gripped in a political crisis, where the opposition-leader (and cricket legend) Imran Khan asked his followers two days ago to surround the nation’s parliament building, and calling for a Tahrir-Square-like protest to oust Prime Minister Nawaz Sharif. While political instability is a hallmark of Pakistan’s coup-prone government, Khan’s concerns at the demise of law-and-order in the nation along with a belief that May 2013’s election was “stolen” through conspiracies to rig the results, have led him to demand his followers stop paying taxes and utility bills.

Yesterday the government agreed to begin talk with Khan howeverm earlier today the former cricketer said he had suspended talks with the government saying the administration planned an “aggressive crackdown” on the thousands of demonstrators currently protesting in front of Parliament. Mr. Khan claims that the government came to power after rigging the 2013 elections.

And while his domestic ambitions are clear, it is his hatred of a certain country in the international arena that was most notable: “You like only those governments in Muslim countries that are your slaves,” Mr. Khan said in remarks directed at the U.S. “Is there another democracy for you, and another for us?“

If Khan succeeds in overturning the Sharif government, one can be sure that this will only be the beginning. In the meantime, the US is certainly doing everything in its power to antagonize yet another future anti-American regime:

In other words, if Khan ascends to power and if Sharif requests US assistance, America will find its drones delivering “humanitarian assistance” to yet another country in a world where daily US bombings, pardon, “lethal ordnance delivery advisory work” have become so common it is easier to keep track of the countries the US isn’t liberating.

Diplomats in Islamabad say they are concerned about the stability of Pakistan and fear that a battle for survival is consuming Mr. Sharif’s government, sinking his economic-revival program and hopes of forging peace with traditional foe India.

Mr. Khan and Muslim cleric Tahir ul Qadri, whose supporters are staging a parallel sit-in protest, are demanding Mr. Sharif’s resignation. Government aides say they believe that the demonstrations are secretly backed by the military and its spy agencies. The prime minister has clashed with the armed forces over a range of issues in recent months.

The protesters have been gathering in Islamabad since Friday, having set off the previous day by car and bus from the eastern city of Lahore, 200 miles away. Mr. Khan insists that he won’t call off the protest until Mr. Sharif quits.

While Mr. Sharif is determined not to resign, he won’t use force against the demonstrators, aides said.

“The political impasse is hurting the economy, the prime minister concedes,” said one aide. “But he is confident that he can handle the situation. He will just wait them out. Their numbers are thinning.”

Worst case, if the economy truly collapses, Pakistan can just blame snow in the upcoming winter: after all if it works for the US it should work for everyone.

Meanwhile the political situation in Pakistan has reached a fever pitch:

Some 30,000 security forces have been deployed around Islamabad in response to the protests, including soldiers requisitioned by the government.Mr. Khan had promised to bring one million protesters to Islamabad, but the actual numbers are much smaller, with independent estimates putting the combined strength of the two demonstrations at between 20,000 and 60,000.

Mr. Sharif enjoys a majority in Parliament. Mr. Khan’s Pakistan Tehreek-e-Insaf party gained just 34 out of 342 seats in the May 2013 election that saw a landslide victory for Mr. Sharif. The other opposition parties are supporting the prime minister, bolstering his position.

The Parliament, in the absence of Mr. Khan’s PTI, passed a unanimous resolution Thursday that “rejects the unconstitutional demands” of the protesters.

And while the US so far has backed Sharif, that is hardly assured for the indefinite future. After all it was not that long ago that the US flip flopped in its Pakistan political alliance, during its latest intervention in the country:

Mr. Sharif’s last government was ousted in a coup in 1999 by then-army chief Pervez Musharraf. Mr. Sharif’s determination to prosecute Mr. Musharraf for treason is one of the main sources of his friction with the current military leadership.

After the Sept. 11, 2001, attacks in the U.S., Washington allied itself with Mr. Musharraf’s military-led government. However, by 2008, in a change of policy, Washington backed a transition to democracy in Pakistan, supporting elections that year that brought to power the Pakistan Peoples Party led by President Asif Ali Zardari.

In the Musharraf years and early period of Mr. Zardari’s government, then-U.S. ambassador Anne Patterson played a central role in Pakistani politics, including as a mediator between the military and the politicians, leaked U.S. diplomatic cables have shown. However, U.S. officials insist that they no longer seek to influence internal politics in Pakistan, where anti-American sentiment runs high.

Hardly surprising considering anti-American sentiment appears to be the dominant theme covering the world these days, even in countries that supposedly pass for US allies.

Mr. Khan, in his speech, singled out current U.S. ambassador Richard Olson. “Please don’t take sides and please do not back stooges like Nawaz Sharif,” Mr. Khan told a roaring crowd, in remarks in English directed at Mr. Olson. “If you want Pakistan to be a friend of the United States, we are willing to be friends, but please [understand], a Prime Minister Imran Khan can never become a stooge like Nawaz Sharif.”

A statement issued by the U.S. embassy in Islamabad Thursday denied local media reports of a hands-on U.S. role in the current crisis. “The United States is in no way involved in the process or discussions between parties. Any suggestion to the contrary is false and unhelpful to the dialogue between parties,” said the U.S. embassy.

Just in case anyone needed proof that is. As for the fact that virtually every populist and nationalist leader around the globe now uses America as a enemy symbol around which to “rally the troops”, that may be something even the GOTUS should carefully evaluate, whether or not he is on (permanent) vacation.