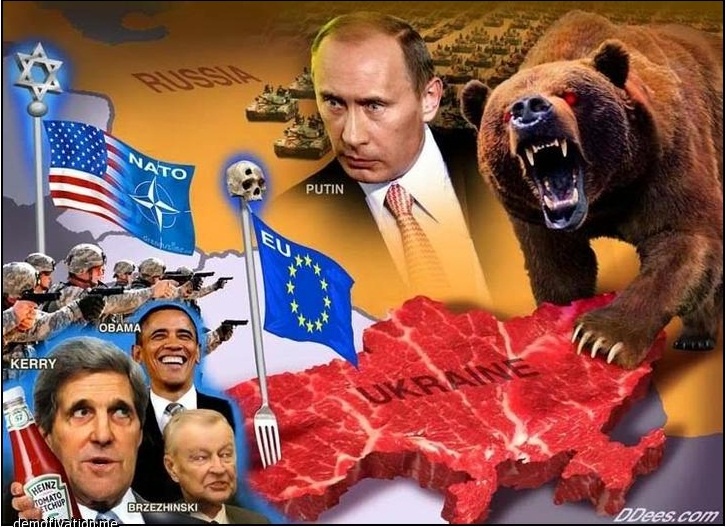 U.S. President Barack Obama’s war against Russia isn’t only causing Russia to cooperate more strongly with the other BRIC countries to break the U.S. dollar’s reign as the global reserve currency, but it’s also causing Russian President Vladimir Putin’s job-approval rating in Russia to soar, and the confidence that the Russian people have in their own Government to soar likewise.

The latest of these signs came on 5 August 2014 in a report from Gallup Analytics (by subscription only) headlined “Russians’ Confidence in Many Institutions Reaches All-Time High.” Especially sharp has been the rise in “Confidence in national government,” which was only 39% in 2013 prior to the overthrow by Obama in February 2014 of Ukraine’s government which had been friendly to Russia, but which confidence-level stands now at 64% — a gain of 64/39 or 1.64 times higher than it was a year ago. Confidence in the military has risen from 65% in 2013 to 78% now. Confidence in the “honesty of elections” has risen from a very low 23% in 2013 to 39% today (which is 39/23 or 1.70 times higher), as increasing numbers of Russians have come to conclude that their political system is producing better results for them than they had expected, perhaps better than in the longer-established “democratic” nations, such as the United States, whose President Barack Obama is far less highly regarded now by Russians, after his overthrowing Ukraine’s Government, than he was prior to that. Remarkably, more Russians than ever before, 65%, answer “Yes” when asked “are you satisfied … with your freedom to choose what you do with your life?” Last year, only 56% did, down 2% from the prior all-time high of 58% in 2006.

A Gallup poll issued on 18 July 2014 headlined “Russian Approval of Putin Soars to Highest Level in Years,” and reported that “President Vladimir Putin’s popularity in Russia is now at its highest level in years, likely propelled by a groundswell of national pride with the annexation of Crimea in March on the heels of the Sochi Olympic Games in February. The 83% of Russians saying they approve of Putin’s leadership in late April/early June ties his previous high rating in 2008 when he left office the first time.” Furthermore, “The 29-percentage-point increase in Putin’s job approval between 2013 and 2014 suggests he has solidified his previously shaky support base. For the first time since 2008, a majority of Russians (73%) believe their country’s leadership is leading them in the right direction.” Pointedly, Gallup says: “At the same time that their faith in their own leadership has been renewed, Russians’ approval of the leadership of the U.S. and the EU are at all-time lows. The single-digit approval of the leadership of the U.S. and EU at least partly reflects Russians’ displeasure with the position each has taken on their country’s ongoing involvement in Ukraine and its annexation of Crimea.” Moreover, “Despite U.S. and European sanctions earlier this year over Moscow’s intervention in Ukraine, more Russians see their economy getting better now than has been the case since 2008.”

All of these changes are largely attributable to Obama’s replacement of the democratic but corrupt government in Ukraine by a dictatorial but corrupt one (now elected only by voters in the areas of the country that the new regime isn’t ethnically cleansing to get rid of the people who had voted into office the President — Viktor Yanukovych — whom Obama and the CIA overthrew in February 2014).

Furthermore, there was no serious possibility of Crimea’s rejoining Russia (of which Crimea had been a part between 1783 and 1954) until the new Ukrainian regime massacred hundreds of its opponents inside the Odessa Trade Unions Building on May 2nd, the event that caused Yanukovych’s voters to fear for their lives. That massacre was co-masterminded by Ihor Kolomoysky, the billionaire gas oligarch who recently hired Joe Biden’s son.

On 2 July 2014, I headlined “Gallup Poll Finds Ukraine Cannot Be One Country,” and reported that, “The 500 people that were sampled in Crimea were asked ‘Please tell me if you agree or disagree: The results of the referendum on Crimea’s status [whether to rejoin Russia, which passed overwhelmingly] reflect the views of most people here.’ 82.8% said ‘Agree.’ 6.7% said ‘Disagree’.” Moreover, “Additionally, in the Crimean region — Ukraine’s farthest southeast area, which our President, Barack Obama, says that Russia forcibly seized when the people there voted overwhelmingly on 16 March 2014 to become part of Russia again (as they had been until 1954) — only 2.8% of the public there view the U.S. favorably; more than 97% of Crimeans do not.” Moreover, Gallup surveyed Crimeans a few months before Obama’s coup in Ukraine, and headlined “Public Opinion Survey: Residents of the Autonomous Republic of Crimea, May 16-30, 2013.” They found that when asked “Regardless of your passport, what do you consider yourself?” 40% said “Russian,” 25% said “Crimean,” and only 15% said “Ukrainian.” So: when the Autonomous Republic voted after Obama’s coup, when even fewer Crimeans self-identified with the now-fascist-run Ukraine, it had to have been a foregone conclusion they’d choose Russia, because even prior to that, there was nearly a three-to-one preference of Russia over Ukraine. That same poll showed 68% favorability for Russia and 6% favorability for “USA.” 53% wanted to be part of the Customs Union with Russia, Belarus and Kazakhstan, while only 17% wanted to be part of the EU. Obama lies through his teeth about Crimea. On 25 March 2014, the Los Angeles Times headlined “President Obama Says Russia Seized Crimea.”

On 15 July 2014, Newsweek bannered, “BRICS Conference Plots a Challenge to Western Economic Domination,” and reported that, “A new monetary organization that aims to be a rival to the World Bank and the IMF was launched today by leaders of the BRICS group at their annual summit. Leaders of Brazil, Russia, India, China, and South Africa, banded together as a set of emerging nations, announced the long-awaited bank and contingency fund, a clear move away from the dominance of the West in global economics and the dire consequences of an unstable dollar.”

Obama’s takeover of Ukraine — or of the romp western portion of it that will remain as “Ukraine” after the civil war that Obama started there — will leave a weakened United States, and a world far more hostile to us. He, and his stooges in Europe, may succeed in harming Russia, but the public in every nation will be harmed by what Obama has done in Ukraine. A few aristocrats who will be grabbing former Ukrainian assets will gain, but they and their U.S. and EU partners (such as Exxon, Chevron, and Shell) will be the only ones who will. Aristocrats are the only people that Obama really cares about. He certainly doesn’t shed crocodile tears over the hundreds of thousands of residents in southeastern Ukraine who are either being murdered or else fleeing into refugee camps inside Russia, all due to him – due to people he has appointed, decisions he has made, and actions he has taken.

For everybody except Obama’s patrons, his policies regarding Ukraine are disastrous.