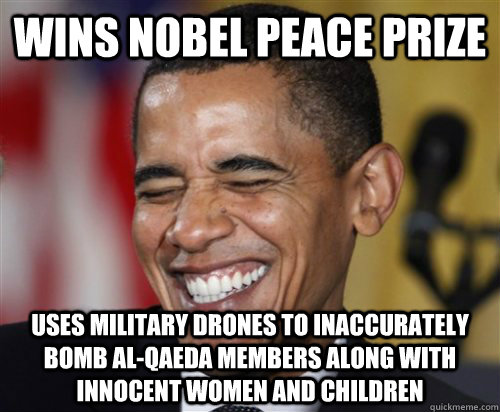 State of The Nation

It was quite suspicious when Barack Obama was nominated for the Nobel Peace Prize less than two weeks before his first inauguration in 2009.

It was even more suspicious when he actually won the prize based on NO merit whatsoever. Nada … nothing … zilch … zero … no accomplishment to speak of in the arena of peace-making, especially world peace-making.

Only on the basis of a quixotic “Hope & Change” campaign jingle was he awarded the highest accolade for peace on the planet.

Obama has made a total mockery of the Nobel Peace Prize

In light of recent outright war-mongering in Syria, as well as many other bellicose initiatives throughout the world, this president has succeeded in making a complete mockery of the Nobel Peace Prize.

Such a travesty, in fact, that the Norwegian Nobel Committee is obligated to strip him of the award post haste. That is, of course, if their illustrious award is to retain any meaning or credibility in the future.

Where are you Norwegian Nobel Committee (NNC) during this moment of dire need and urgently required intervention? Wouldn’t it be appropriate to re-visit such a disastrous decision.
You may remember that it was Obama who ordered up 30,000 more troops to Afghanistan just days after accepting the award.

Fast forward to September of 2013 and here Obama is again beating the war drums.
Britain has voted down any involvement in Syria.
Germany has said no to war and says it has “No Plans to Join Syria Military Action”.
Italy has asserted that it will take no part in any strikes against Syria.
The United Nations has declared Obama’s proposed military aggression to be illegal.
The European Union has strongly counseled for a diplomatic solution.
The BRICS nations urged that Obama should “lay aside the futile pursuit of a military solution”.
Even the Pope has weighed in as he “urges G-20 leaders to avoid military action in Syria.” So how is it that a Noble Peace Prize winner has to be goaded into pursing the path of peace in Syria, rather than the road to war?!
Something is very wrong with this picture. So wrong that the only alternative is for the NNC is take back the Nobel Peace Prize at this critical juncture.

In this way the message sent to the world will be that war will no longer be tolerated by the community of nations unless it is absolutely necessary and there are no other alternatives available. And only then should such life and death decisions be taken with the unanimous consensus of the entire community of nations, less the aggressor.

President Obama and Secretary of State John Kerry have made a farce of the entire UN Security Council process.  Their “our way or the highway” approach has served to profoundly undermine the only international body that has the teeth and legitimacy to address such weighty and consequential matters.

In so doing they have imperiled the entire global community and made it subject to a highly perverted and twisted form of American justice. Some remark that Pax Americana can only be delivered at the barrel of a gun just like Yankee gunboat diplomacy. There was a time when the US Department of State was much more about negotiating peace around the world than waging war.

There is perhaps no more effective way to short-circuit this unlawful and scandalous rush to war with Syria than than to strip Barack Obama of his ill-gotten peace prize.
Clearly he never earned it. He has since done nothing to instill confidence that he can act as an ombudsman for peace around the world. Likewise, his deplorable track record only indicates a future trajectory toward more military aggression.

It is the perfect time for the Norwegian Nobel Committee to act. Doing so may very well save thousands of lives, prevent millions of additional refugees from having to seek safe haven, and protect the homes and businesses of millions who have already suffered untold misery.