According to yesterday’s Wall Street Journal, the bailed out financial criminals at Goldman Sachs are set to launch the latest and greatest toxic derivative product directly into the portfolios of willing muppets the world over. It all starts this September, so public pension funds may as well just start taking out stacks of hundreds and torching them at Burning Man while they still have a chance.

Yes, it’s called the “Fixed Income Global Structured Covered Obligation,” and no, you will not have a clue what’s in it. No seriously, you won’t have a clue.

The Wall Street Journal describes the “final frontier in the search for yield:”

Ultra-loose monetary policy has prompted investors to take more risk in exchange for yield. For some, that means buying lower-rated bonds or debt with longer maturities. Another route is to invest in more complex deals. All this creates incentives for financial engineering. In credit derivatives markets, there are signs investors are delving back into esoteric structures.

Citigroup reports a “large increase” in trading of products that slice and dice exposure to defaults in credit-default-swap indexes. The bank says this is mostly driven by hedge funds, but that other investors who may struggle to meet return targets could be drawn in.

Another example: Goldman Sachs has been marketing a new structure: a so-called Fixed Income Global Structured Covered Obligation that may come to market in September. It borrows elements of covered bonds, a structure with a long history in Europe. Investors will have a claim on a pool of dedicated assets and against two guarantors, Goldman and Mitsui Sumitomo Insurance.

But in many ways, the deal isn’t a covered bond. Instead of funding mortgages or public-sector loans, it will provide funding for a portfolio of fixed-income securities sourced from Goldman. The deal is structured via a derivative, a total-return swap entered into by Goldman Sachs Mitsui Marine Derivative Products.

And investors won’t know what exactly is in the pool. They will get a breakdown of the kinds of assets included, but not the exact composition. And what is in the structure can change. Crédit Agricole notes the pool could be predominantly residential-mortgage backed securities at one point, sovereign debt at another and corporate bonds at yet another.

But here’s the best part…

S&P has rated the deal triple-A.

Not to worry. As Paul Butnik informed us earlier today: 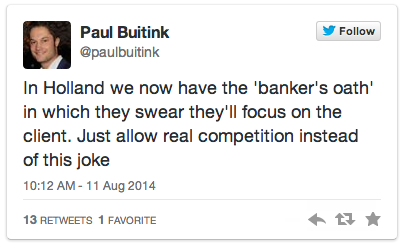 Of course, this is just the latest iteration of the current credit bubble, which I’ve covered extensively this year.Some additional recent articles on the topic can be found below:

Credit Mania Update – The Chase for CCC-Rated Bonds Is the Credit Bubble Popping?

Guest Post: Is There a Massive High Yield Credit Bubble?