Global Warming Is Altering the Flow of the Missouri River 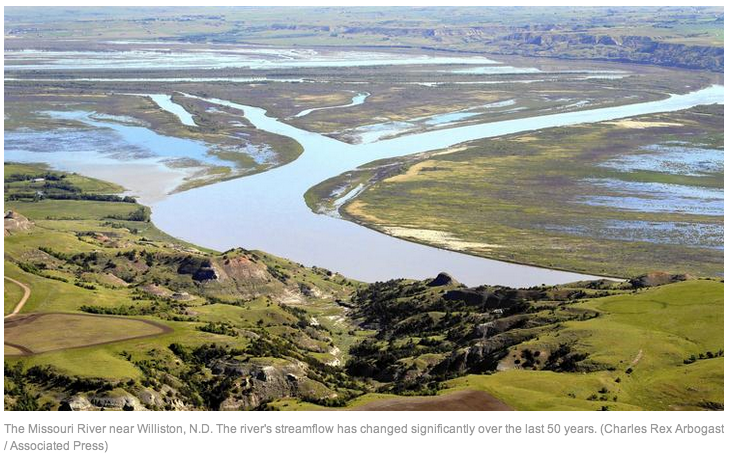 Global Warming Is Altering the Flow of the Missouri River

Montana farmer Rocky Norby has worked the land along the Missouri River for more than 20 years, coaxing sugar beets and malted barley out of the arid ground.

“Every year it gets worse,” he said. “There’s not enough water to get through our pumps.” Last month, he said, he spent more than $10,000 trying to remove the sand from his clogged irrigation system.

The Missouri River’s stream flow has changed significantly over the last 50 years, leading to serious water shortages in Montana and Wyoming and flooding in the Dakotas, according to a U.S. Geological Survey report released last month.

“We’ve all had to make some adjustments,” said Buzz Mattelin, another Montana farmer who irrigates with water from the Missouri. “We’ve had to spend more money and learn how to adapt.”

In the Dakotas, flooding is more common, leaving fields too muddy to plant or harvest crops.

This dichotomy isn’t necessarily a surprise.

“Climate change models predict that where it is wet, it will get wetter, and where it is dry, it will get drier,” said Matt Rice, a program director at American Rivers, a nonprofit conservation organization.

The mighty Missouri River begins in the Rocky Mountains of western Montana, flowing east and south for more than 2,300 miles before entering the Mississippi River north of St. Louis. The Missouri and its tributaries provide hydropower as well as water for agriculture, energy, recreation and municipalities in several states, including Montana, Nebraska, Wyoming and the Dakotas.

Climate shifts may be causing the disparate changes in the Missouri River Basin, the USGS report says. The scientists noted that higher stream flow in the Dakotas had occurred even as water use increased. In addition, they said, lower stream flow in some areas could be related in part to groundwater pumping.

“Understanding stream flow throughout the watershed can help guide management of these critical water resources,” said USGS hydrologist Parker Norton, lead author of the report that focuses on stream flow. The study is part of his doctoral research, which will analyze precipitation patterns, temperatures and their effects.

In the Great Plains, average air temperatures have warmed 3 to 4 degrees in the last century, according to the Environmental Protection Agency. That contributes to the problem.

An ear of corn sprouts on a once flooded field near Tekamah, Neb., in 2011. Some farmlands along the Missouri River have been facing severe water shortages in recent years, while others have had to deal with flooding. (Nati Harnik, Associated Press)

“What is apparent is that the climate is changing and that it is being reflected in the stream flow conditions,” said Mark Anderson, director of the USGS Water Science Center in South Dakota and another of the report’s authors.

The changes in the Missouri River Basin have far-reaching effects, and not just on farming. Other industries, including tourism and recreation, also depend on water.

“An awful lot of our economy is based on having water and streams,” said Bruce Farling, executive director of Montana Trout Unlimited and a fly fisherman for about five decades.

In Montana, according to the Institute for Tourism and Recreation Research, one in nine workers has a job linked to tourism, and non-residents spent more than $3.6 billion last year.

During the last few years, Farling said, some of Montana’s famous fishing areas have been closed for parts of August and September because of “low flows, high temperatures and too much stress on fish.”

Farmers are stressed too. Nearly 30,000 farms and ranches bring in $4.2 billion to Montana annually, according to the U.S. Department of Agriculture. That would drop dramatically without water.

Norby grows malted barley and sugar beets on 3,000 acres of irrigated land near Sidney. He produces about 100 bushels of barley per acre, he said, and without irrigation that would fall to 20 to 40 bushels. As for sugar beets, he couldn’t grow them at all without irrigation.

“It would be up to five times of a loss in production,” Norby said.

Of Montana’s 9.5 million acres of cropland, 2 million are irrigated, according to the state Department of Agriculture.

Meanwhile, in the Dakotas, farmers struggle with too much water. Premiums for “prevented planting” insurance — which protects them if they cannot plant because of drought or flooding — have soared because of an upsurge in claims, the USDA says.

In 2007, South Dakota had about 613,000 acres eligible for prevented planting payments, according to reports from the USDA Risk Management Agency. A year later, that had more than doubled, to 1.38 million acres.

“If you look at Wyoming and Montana, you see a decline in precipitation, but farther east into the Dakotas, there is a well-documented increase in precipitation,” Todey said. “More water, more opportunities for flooding.”

But it isn’t popular to blame Mother Nature in these parts.

In March, 187 landowners in South Dakota, Nebraska, Iowa, Kansas and Missouri sued the U.S. Army Corps of Engineers, alleging that mismanagement had brought on three months of flooding in 2011.

A National Climate Assessment released this year by the White House found that those floods did $2 billion in damage to crops and property in the region.

Nebraska farmer and farm equipment salesman Scott Olsen, a plaintiff, said it would take him another year and a half to fix the damage. He’s spent $250,000 on moving soil and filling holes so that he can farm again, he said, but sand is still 6 to 8 feet deep in some places.

Olsen blames government projects — including an effort to create habitat for endangered species like the piping plover and pallid sturgeon — for the “man-made floods.”

He doesn’t believe in climate change, but he does agree that the Missouri River is changing.

“We no longer have a smooth, easy-going river,” he said. “It’s choppy and eroding the banks and just pretty ugly at this point in time.”