Gaza War Crimes To Be Investigated By Pro Israeli Committees

State Comptroller Shapira announced on August 13, that he will investigate war crimes in Gaza, joining an earlier decision of the UN to conduct a similar enquiry. The head of the UN Committee is on the editorial board of the Israel Law Review. 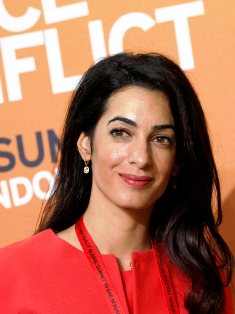 Amal Alamuddin, George Clooney’s fiancee. Click to enlarge
Censorship in Israel$ is easily bypassed. “As quoted from foreign news sources” are the magic words that render the Military Censor powerless.

Israeli sources willing to bypass censorship leak the news to an Arabic newspaper and then quote it. The trademark of this trickery is that the Hebrew source will in such a case forget to mention the Arabic source.

The scam masters are Yediot Ahronot and Haaretz, the leading Hebrew newspapers. Hardworking journalists in these outlets do not need to spend white-nights searching for a cooperating Arabic newspaper. Al-Hayat (The Life) in London is happy to comply.

Owned by a Saudi prince and featuring a predominantly Christian Lebanese and Christian Palestinian management is not wildly anti-Israeli, to put it softly.

In fact, it is so popular in Israel that today it greeted me with Hebrew advertisements. Below is a snapshot of the incriminating page. The ads were supplied by Google and not the newspaper. It indicates that a significant number of readers arrive from Israel. The enlarged ad advertises Israeli equipment against chemical weapons. 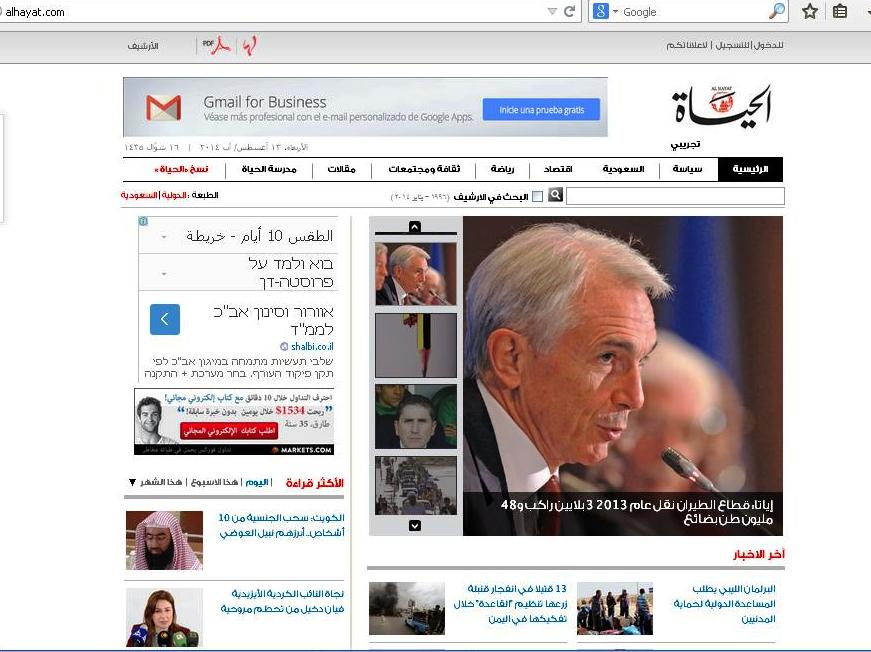 Its Foreign Editor is Baria, mother of Amal Ramzi Alamuddin, fiancée of George Clooney. The latter is a paragon of Hollywood, another Western bastion close to Israel.

A prominent and well-respected lawyer, Amal worked in the Office of the Prosecutor at the UN Special Tribunal for Lebanon, at the International Criminal Tribunal for the former Yugoslavia and represents Julian Assange in his extradition case. Other high-profile cases fill her portfolio.

Everything indicated that Amal will silently cooperate with Israel

Shortly after the beginning of Operation Strong Cliff,* it became clear that Israel was committing war-crimes. Babies cannot be considered enemy soldiers; killing them is a crime. Bombing schools is a crime. International outcry started on July 16, when children were killed in an Israeli bombing of a beach in Gaza.

Even the BBC recognized the horror. On July 23, it reported: “Families are taking the heart-wrenching decision to split to different locations – mother and son to one; father and daughter to another – hoping to maximise the chance one part of the family survives.”

The UN approached several people, offering them membership in the committee. One of them was Amal.

A very shocked Time reported her reaction: “I was contacted by the UN about this for the first time this morning,” … “I am honoured to have received the offer, but given existing commitments—including eight ongoing cases—unfortunately could not accept this role. I wish my colleagues who will serve on the commission courage and strength in their endeavours.”

Considering the leadership of the committee, she took a decision of honor. There is no chance that the committee will perform honestly. 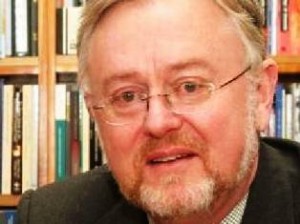 William Schabas. His surname is the Hebrew acronym for “Prison Service”
On August 11, the UN announced that the abovementioned commission will be chaired by William Schabas, a Canadian law professor, proud recipient of the Order of Canada, the country’s the second highest honor for merit.

In comparison with Canada, the USA is an anti-Israeli country. Canada is even the unlikely recipient of a “resident military attaché” from Israel, in what probably is a worldwide precedent.

International media make a scandal of Mr. Schabas public statements against PM Netanyahu. That was an excellent public relations strategy, which can be safely defined as propaganda.

After all, it is like comments of a Labor Party member against a Prime Minister of the Likud. Mr. Schabas is not a complete foreigner in Israel. He is on the editorial board of the Israel Law Review.

Unless the UN adds a Hamas member to the committee, it is biased towards Israel, the undisputed aggressor in this case.

After the commission was set and a UN report favorable to Israel was assured, the indefatigable conspirators wiped sweat from their foreheads and focused on the next target.

No less important to the Israeli government is to advertise internationally the decency of its administration.

On August 13, State Comptroller Joseph Shapira announced that he will check up the function of the political and military upper echelons during Operation Strong Cliff due to complains that Israel broke international law.

Veteran readers of this website are already smiling. The same was done after Gaza’s Freedom Flotilla massacre. PM Netanyahu was found guilty. Then Comptroller Micha Lindenstrauss wrote: “The decision-making process regarding the dealings with the Turkish flotilla led by Prime Minister Benjamin Netanyahu and under his responsibility was found to include essential and significant flaws.”

The assessment was done in 2012. In 2014, Netanyahu is still in power while Mr. Lindenstrauss has retired.

State Comptroller recommendations are not obligatory; the Israeli government can ignore them. The same will probably happen with the current investigation, which is aimed only at creating a pretty picture in international media.

“Now we can enjoy a coffee,” the indefatigable conspirators laughed.