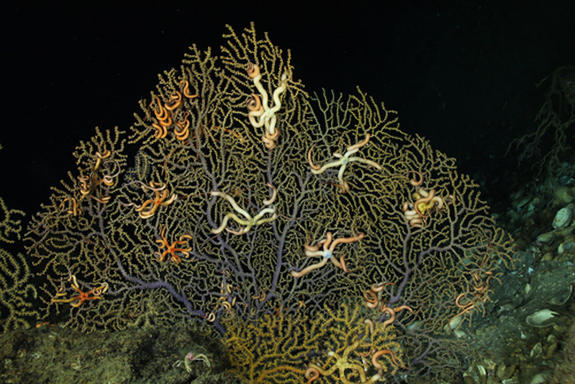 A coral community damaged by the 2010 BP oil spill.

By
By Elizabeth Palermo
LiveScience

Four years after a BP oil rig exploded and flooded the Gulf of Mexico with an estimated 170 million gallons of oil, scientists have discovered further evidence of coral communities affected by this environmental disaster.

Scientists at Pennsylvania State University, in State College, Pa., found coral communities that show signs of damage from 2010’s Deepwater Horizon oil spill more than 12 miles (20 kilometers) from the disaster site. The new findings suggest that the oil spill’s footprint is both deeper and wider than was previously thought.

“This study very clearly shows that multiple coral communities, up to 22 kilometers [13.7 miles] from the spill site and at depths over 1,800 meters [5,905 feet], were impacted by the spill,” Charles Fischer, a professor of biology at Penn State and co-author of the study, said in a statement.

To locate additional coral communities that may have been affected by the spill, Fischer and his team used 3D seismic data from the Bureau of Ocean Energy Management. They identified 488 potential coral habitats within a 25-mile (40 km) radius of the spill site, and from that list selected 29 sites that may have been impacted by the 2010 disaster. [Images of Coral Damaged by Deepwater Horizon Spill]

Using a specially designed digital camera, called a tow system, as well as a robotic submarine, the researchers captured underwater images of the ocean floor. Where coral sites were found, the team used a remotely operated vehicle (ROV) to collect high-resolution images of the corals.

The researchers then compared images of new coral communities with previously collected data of a coral community affected by the 2010 spill. These older coral images served as a model “fingerprint” for gauging the impact of the spill on newly discovered coral.

“With the camera on board the ROV we were able to collect beautiful, high-resolution images of the corals,” Fischer said. “When we compared these images with our examples of known oil damage, all the signs were present providing clear evidence in two of the newly discovered coral communities of the impact of the Deepwater Horizon spill.”

Unlike other organisms whose remains sink to the ocean floor and quickly disappear, corals form a mineralized skeleton that can last for years after the organisms die, according to the researchers.

“One of the keys to coral’s usefulness as an indicator species is that the coral skeleton retains evidence of the damage long after the oil that caused the damage is gone,” Fischer said.

In their search for coral communities affected by the 2010 oil spill, the researchers also found two coral sites entangled with commercial fishing lines. This discovery serves as a reminder that, in addition to the Deepwater Horizon oil spill, marine species in the Gulf of Mexico continue to be harmed by a wide range of human activities, the researchers said.

The study was published online July 28 in the journal Proceedings of the National Academy of Sciences.