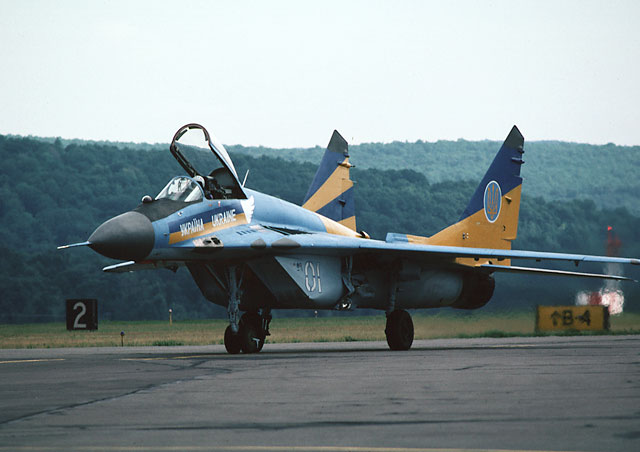 Romanian military expert, pilot and former deputy commander of Otopeni military airport, Valentin Vasilescu, presented his version of the tragedy of the Malaysian Boeing in the sky over Ukraine. According to the expert, the plane was shot down by Ukrainian MiG-29, possibly piloted by Polish pilot.

Valentin Vasilescu refutes the theory, according to which the plane had been shot down by surface-to-air missile, which, according to American and Ukrainian versions, the militia launched from Buk-1M mobile unit.

“A surface-to-air missile, with a warhead weighing from 40 to 70 kilos, explodes not inside the object of destruction, but near it, at a distance of 50-100 meters. The detonation of the warhead produces a shock wave that disperses fragments with high velocities. They can puncture the fuselage of an aircraft, but given the size of the Boeing-777 (73 meters long, with a large wingspan), they can not lead to the destruction of the aircraft in separate smaller parts, as it happens with the aircraft that are 7-10 times smaller. Such fragments, when hitting a Boeing-777, can rupture the fuel system of the aircraft. The fuel can spread on the fuselage and wings, setting the whole plane on fire,” said the expert.

“Similarly, if the hydraulic system had been damaged, the Boeing 777 would have lost control of the flight. Thus, if such a large aircraft like Boeing-777 of Malaysia Airlines had been hit by surface-to-air missile, the crew would have been able to warn traffic control services of the situation on board. But we do not see anything like that in registers,” Valentin Vasilescu said.

The plane, as shown by black boxes, collapsed in the air, but this is only possible in case of a horizontal nosedive from the height of ten thousand feet, when the maximum speed limit is exceeded. “If the plane spins, the crew is very often unable to control the aircraft. Instantaneous depressurization of the cockpit may also occur,” the expert said.

Douglas Barrie, a researcher of the International Institute for Strategic Studies, said that the edges of a fragment of the cockpit fuselage on the right side were bent from the inside to the outside. This indicates an explosion that occurred inside the plane, which is impossible if the Boeing MH-17 had been shot down by missile equipped with a proximity fuse.

The plane could not be shot down by Buk-M1 as there was no electromagnetic radiation from the missile complex registered. There was no thick plume or white condensation of 10-35 kilometers from the earth, which appears and lasts for several minutes after launch.

The expert notes that he is not alone in his opinion. For example, Gordon Duff, a veteran of the Vietnam War, currently a security consultant, believes that the Malaysian Boeing could not be shot down by surface-to-air or air-to-air missile. According to him, it was either a bomb explosion on board, or “a gun of a Ukrainian fighter jet.” “It was a diabolical brain that planned the attack, as flight MH-17 was shot down from an onboard gun. The gun left traces that make one believe that it was a small bomb that exploded inside,” he said. Canadian expert Michael Bociurkiw wrote in his report that part of the aircraft fuselage was dotted with “shrapnel-like, almost machine gun-like holes.” He said the damage was inspected by Malaysian aviation-security officials. Bociurkiw believes that Boeing MH-17 was shot down from small arms or artillery weapons of a fighter aircraft that had a high fire rate.

The expert referred to the report from BBC correspondent Olga Ivzina from July 23, 2014, which was later censored by the company management. The report provided testimony from residents of the Donetsk region, who confirmed the presence of another aircraft in the sky over the area, where  the catastrophe occurred.

According to Valentin Vasilescu, evidence from Russian military experts about the participation of a Ukrainian fighter aircraft in the destruction of the Boeing were quite convincing. He recalled that at the press conference of the Ministry of Defence of the Russian Federation on July 21, 2014, Chief of Air Staff, Lieutenant-General Igor Makushev and Head of the Main Operations Directorate of the General Staff of the Armed Forces, Lieutenant-General Andrei Kartopolov, noted that at the time when the airliner disappeared from radar screens, radar stations of the Russian Defense Ministry registered another aircraft, supposedly a Su-25. The aircraft is capable of gaining altitude of up to ten kilometers and can be equipped with air-to-air missiles with a range of 12 kilometers, capable of striking targets at a distance of five kilometers. The unidentified aircraft was approaching the liner at a distance of three to five kilometers and then continued to patrol the crash site.

However, the Romanian expert believes that it was not a Ukrainian Su-25, as the plane could not reach the altitude of 10,300 meters and strike the Boeing due to the poor level of training of Ukrainian flight personnel and technical imperfection of old Su-25. Vasilescu indicates that radars show Su-25 identically to MiG-29 fighter jet, as the planes have identical reflective surface area. “The altitude limit for MiG-29 is 18,013 meters, so the height, at which the Malaysian plane was flying – 10,300 meters – was easy to achieve.” “The Su-25 does not have enough acceleration due to its maximum speed of 975 kilometers per hour, so it can not catch up with a Boeing-777, and follow it at a distance of 58 kilometers at a speed of 900 kilometers per hour and at an altitude of ten thousand meters, keeping the velocity of about 200-300 meters per second, to attack it from on-board weapons. A Mig-29 has two high thrust engines, allowing it to develop the speed of 2000 kilometers per hour. The fleet of the Ukrainian Air Force has fighter aircraft MiG-29 that are capable of intercepting Boeing-777. The fighters are based near Kiev and in Ivano-Frankivsk,” the expert concludes.

Vasilescu added that MiG-29 of the Ukrainian army are armed with GSh-301, 30 millimeter gun, with a rate of 1,500 rounds per minute. The gun was loaded with 150 shells containing tungsten alloy. “These shells go through targets, leaving traces of perfectly circular shape. They do not explode inside the cockpit, they are not incendiary, but can kill the crew and destroy the cockpit, which can be seen in the presence of holes with their edges opening outside on the opposite wall.

Thus, the Malaysian Boeing MH-17, according to the Romanian expert, was shot down from a gun of a MiG-29 aircraft, rather than a missile. Even air-to-air missiles, the expert says, R-60, for example, have a proximity fuse. In this case, fragments would fly 360 degrees around and strike the entire fuselage of the aircraft, not just the cockpit. In addition, air-to-air missiles are equipped with heat seekers that target the most heated part of the aircraft, i.e. the engines. The crashed Boeing had the cockpit destroyed. The death of the crew and the depressurization of the cockpit made the Boeing spin instantly, and the plane fell apart at an altitude of two thousand meters. In the air, there was neither fire, nor bomb explosion.

The Romanian expert noted that Polish military pilots are best trained in south-eastern Europe and have many hours of flight time (180-200 hours per year). “They are familiar with the airspace of Ukraine, they took part in all exercises that Ukrainian Air Force has organized in the last four or five years. Polish Air Force has 31 MiG-29 jets, 16 of which were re-equipped by specialists of Israel Aerospace Industries. The planes received new avionics (multifunction color displays (MFCD), GPS-guided weapons, data-link support, UHF / VHF RT-8200 Rockwell Collins radio station and MDP video technology, etc.). Polish pilots were trained by Israeli instructors who have extensive experience in destroying a variety of air targets, concluded Valentin Vasilescu.

Read the original in Russian

Who shot down Boeing 777 of Malaysia Airlines?