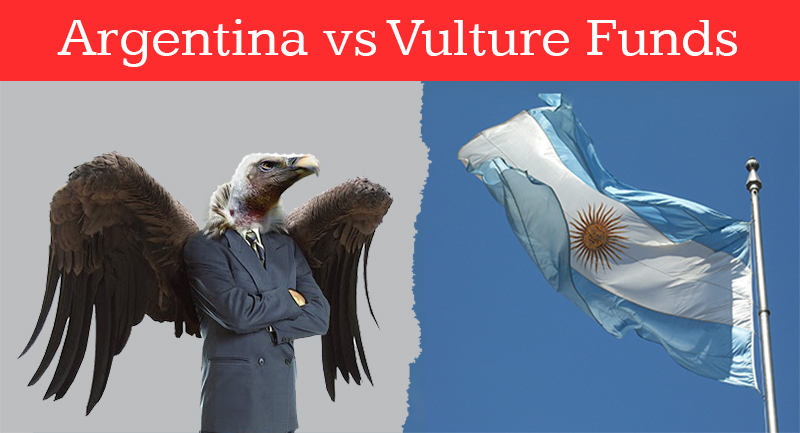 With the impasse over the latest Argentina default going nowhere fast, late last night president Kirchner stunned its creditors when she announced what amounts to a cramdown plan for holdouts, in which all bonds would be stripped of their existing indentures and converted to local law bonds. Or, as some would call it, a “scorched earth” transaction that burns all bridges, and goodwill, with the international creditor community and likely leaves Argentina unable to access global capital markets for the foreseeable future.

As part of its transaction Argentina would bypass the order issued by Judge Griesa halting payments to all creditors, not just the holdouts, and resume normalcy for the 90%+ of restructured bondholders while leaving Elliott, Aurelius and the like with little to no recourse aside from holding on to claims which would be two swaps behind, and with essentially no legal standing as it would completely bypass the Bank of New York (whom it would remove as trustee) custodian payment process and allow Argentina to make payments directly to those creditors it sees fit.

In essence, what Argentina plans to do is the opposite of what Greece did in 2012 when it defaulted on existing bonds, and swaped over into English-law bonds as an incentive for existing creditors, in effect promising it would never do it again. What Argentina has just shown is how easy it would be to “cramdown” bondholders who thought their “strong” covenants were safe when in reality all it takes is a government order to strip any and all of their indenture protection. Needless to say this has a very negative implication for Argentina’s future ability to raise capital in the international arena for the near, and longer-term (at least until the ZIRP yield junkies come crawling back hoping to collect 10% if only for one year; the year after that will be some other Portfolio Manager’s problem).

According to Bloomberg, the government will submit a bill to Congress that lets overseas debt holders swap into new bonds governed by domestic law with the same terms, President Cristina Fernandez de Kirchner said in a nationwide address yesterday. Payments will be made into accounts at the central bank instead of through Bank of New York Mellon Corp., the current trustee.

Holders of Argentina’s $30 billion of overseas bonds have been in limbo since U.S. District Court Judge Thomas Griesa blocked the nation’s attempt to pay $539 million in interest due by July 30. His ruling was meant to compel Argentina to resolve unpaid debts from its 2001 default. While most creditors agreed to provide debt relief, hedge funds led by billionaire Paul Singer’s Elliott Management Corp. refused and successfully sued for full repayment in U.S. court.

“The bigger picture hasn’t changed at all,” Will Nef, who helps manage $3.2 billion of emerging-market debt at Union Bancaire Privee in Zurich, said by phone today. “Argentina is still locked out of international credit markets because the issue with the holdouts remains unresolved.”

It may well be locked out, but if this plan goes through, it will remain in the good graces of its restructured bondholders, while taking the last bit of leverage the holdouts have. However, what is worse are the negative implications for international bondholder contractual terms.

Bloomberg has more on the details of the actual proposed swap:

Argentina plans to create a separate account for the holdout creditors such as Elliott, who own 7.6 percent of debt from 2001 and didn’t accept the government’s previous debt swaps. Payments for holdouts would be deposited under the same terms as the rest of its restructured debt, regardless of whether they decide to accept the swap.

Creditors opting to keep their notes will also get payments locally under the plan, Fernandez said yesterday. Stephen Spruiell, a spokesman for New York-based Elliott, didn’t immediately reply to an e-mail seeking comment.

Daniel Pollack, a court-appointed mediator for the talks between Argentina and the holdouts, didn’t immediately return an e-mail seeking comment on the government’s proposal.

Curiously, alongside the announcement, with the situation suddenly quite “fluid”, ISDA pushed back the date for the auction to settle Argentina’s credit-default swaps to after Sept. 2 from Aug. 21, according to its website. Argentina’s failure to pay interest on its bonds triggered a credit event and settlement of $1 billion of the default swaps.

Amusingly, as Credit Suisse’s Casey Reckman summarizes, and who was quite negative on the announcement as per his overnight note, the Argentina plan would likely result in what is a contempt of court to Judge Griesa. From Bloomberg:

In other words, in order to preserve some optionality, what is next on Elliott’s agenda, would be nothing less than crushing the Argentina’s economy, depleting the central bank’s reserves, which at last check were just under $30 billion, or a little more than Elliott’s AUM, and send the CFK administration packing.

Can he do it? We eagerly await to find out. In the meantime, any Argentina “assets” abroad, be they naval or otherwise, are once again fair rehypothecation game.

Finally, keep an eye on the Argentina bond market where this development will likely play out on accelerated basis, now that Argentina has confirmed it will play “scorched earth” hardball with creditors.