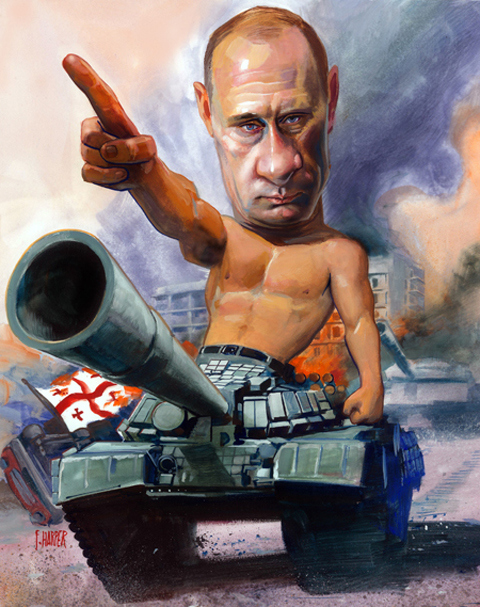 Alex Lantier
Another World Is Possible

(Then: “If Russia and the Communists should win the next world war, many American men would be sterilized. In case the Communists should conquer, our women would be helpless beneath the boots of the Asiatic Russians.”) Now: Putin falsely accused of persecuting gay people. Connect the dots. -Oh, btw., American men already are sterilized. The US mainstream media has saved Putin the trouble. -Ah, one more thing, they’re lobotomized and pretty stupid as well, “dumb, stupid animals”. Kissinger was right. No, not just the soldiers, all of ’em. Their womenfolk too. Next thing you’ll know is they’ll obediently start responding to the neo-cons’ evil hiss for war against Russia. ♫ “That’ll Be The Day“…

The purpose of the ongoing propaganda campaign is to manufacture a new pro-war narrative.

Since Crimea voted last Sunday to secede from Ukraine and rejoin Russia, US officials and the American media have mounted a deafening propaganda campaign, posturing as defenders of world peace, the rights of small nations and international law in opposition to Russia. In this campaign, no lie told to justify support for the Ukrainian regime that emerged from last month’s fascist-led coup is too absurd.

As he announced new sanctions against Russia yesterday, President Obama denounced Russia’s annexation of Crimea. “Basic principles between governments in the world must be upheld in the 21st century,” Obama intoned, such as “the notion that nations do not redraw borders simply because they are larger or more powerful.”

Writing along similar lines, the Washington Post editorialized that “Mr. Putin’s claim that Russia should have a say in the political orientation of its neighbors, and whether they join alliances such as the European Union or NATO, is entirely unacceptable.”

Who is supposed to believe this nonsense? The governing principle of US foreign policy is that it has an unchallengeable right to determine the political orientation of its unfortunate “neighbors” in the Western hemisphere and that of every other country in the world.

As far back as the formulation of the Monroe Doctrine in 1823, the United States claimed the entire Western hemisphere as its sphere of influence, dictating what relations it could have with European powers.

A comprehensive history of blood-soaked US interventions in the internal affairs of the countries of South America, Central America, Mexico and the Caribbean would require an encyclopedic work comprising dozens of volumes. A partial list of the depredations of US imperialism against its neighbors to the south would include the incursions into Mexico between 1914 and 1917, the military occupations of Haiti and Nicaragua, the overthrow of the Arbenz government in Guatemala in 1954, the Bay of Pigs invasion of Cuba in 1961 and the countless CIA assassination plots against Castro, and the 1973 overthrow of the Allende regime in Chile.

Justifying Washington’s support for the overthrow of the Chilean regime and the murder of President Salvador Allende, then-Secretary of State Henry Kissinger cynically remarked:

“I don’t see why we need to stand by and watch a country go communist due to the irresponsibility of its own people. The issues are much too important for the Chilean voters to be left to decide for themselves.”

But why preoccupy ourselves with “ancient history?” Within the last 31 years, the United States has invaded and deposed the governments of Grenada, Panama and Haiti. It has organized bloody insurgency and counter-insurgency operations in Nicaragua, El Salvador and Guatemala. Washington backed the 2009 overthrow of the legally-elected government in Honduras. And since 2002, the United States has been engaged in non-stop efforts (including one failed coup d’état) to over throw the government in Venezuela.

The Obama administration and the Merkel government in Germany could hardly have been surprised that Russia reacted to the installation of a hostile Western puppet regime on its borders. And while they may have been somewhat taken aback by the speed with which Putin acted to assert control over Crimea, they do not view the most recent developments as entirely negative.

As recent statements by US and European leaders and comments by influential pundits make clear, Putin’s defensive actions provide an opportunity to re-brand and re-legitimize a militaristic agenda that has lost credibility with the broad mass of the population.

The impact of the 9/11 attacks and the “war on terror” has faded, and the lies about weapons of mass destruction used to launch the Iraq invasion have discredited war in the working class. The imperialist powers were forced to recognize that they could not proceed with the bombing of Syria last September, largely due to popular disaffection with war.

Faced with broad anti-war sentiment in the working class and the limitations this imposes on their foreign policy, imperialist strategists and their media operatives are seeking to exploit the crisis they provoked in Ukraine to shift public opinion.

This was the subject of Washington Post columnist E. J. Dionne’s commentary on Wednesday, entitled, “Can Putin’s power grab in Crimea bring us together?” In this piece, Dionne wonders how a “war-weary public can be awakened and rallied.” He bemoans statistics showing that only 29 percent of the American population opposes, and 56 percent supports, the view that the United States should not get “too involved” in
Ukraine. He writes:

“We must confront Putin, but this will require a foreign policy consensus that has vanished. A new one will have to be based on principles that predate the Iraq engagement and involve a more measured use of US power. Thus the final paradox: Putin has given Obama the opportunity to begin rebuilding this consensus—if the president decides to try, and if his critics are willing to help him do it.”

So the purpose of the ongoing propaganda campaign is to manufacture a new pro-war narrative, as if that is all that is necessary to erase the lies told about Iraq and Afghanistan from public memory.