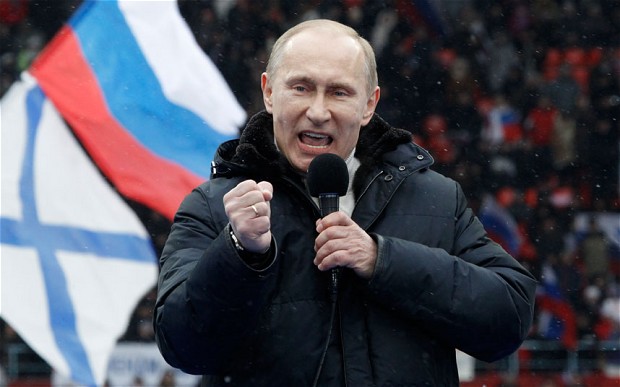 Last week Germany reported that in the second quarter, its GDP declined by 0.2%, worse than Wall Street consensus. This happened a few shorts days after Italy reported a second consecutive decline in its own GDP, becoming the first Europen country to enter a triple-dip recession. What’s worse, Europe’s slowdown took place before the brunt of Russian sanctions hit. Surely in the third quarter the GDP of Germany, a nation whose exports accounts for 41% of GDP, will be even worse, with whisper numbers of -1% being thrown casually around, but one thing is certain: Europe is about to enter its third recession since the Lehman collapse just as we forecast at the end of 2013, a “triple-dip” which may become an outright depression unless Draghi injects a few trillion in credit money (which will do nothing but delay the inevitable and make it that much worse once the can can no longer be kicked), and unless normal trade ties with Russia are restored.

Which means one thing: for Europe to resume the status quo, it needs to break away from the “western” alliance and the sanctions imposed upon the Kremlin which solely benefit the populist agenda of Washington, and certainly not Europe proper, which it is now quite clear, is far more reliant on Russia than vice versa. it is also something Putin apparently was aware of from the very beginning.

And now, that realization is starting to spread to Europe’s own countries, which – while the new cold war was only one of rhetoric were perfectly happy to go for the ride – but now that trade war has finally broken out, suddenly increasingly more want out.

As we reported previously, it all started with the Greeks, a nation of heavy food exports into Russia, who were the first to announce their displeasure with the “Stop Putin” coalition:

the moment Russia retaliated, the grand alliance started to crack. Enter Greece which has hundreds of millions in food exports to Russia, and which was the first country to hint that it may splinter from the western “pro-sanctions” alliance. According to Bloomberg, earlier today the Greek foreign minister and former PM said that “we are in continuous deliberations in order to have the smallest possible consequences, and if possible no significant impact whatsoever.”

And making it very clear that this will be a major political issue was a statement by the main opposition party Syriza which today said that the Greek government’s “blind obedience to the Cold War strategies of Brussels and Washington will be disastrous for country’s agriculture.” In a moment of surprising clarity, Syriza asked govt to immediately lift all sanctions to Russia, as they don’t contribute to a solution of the Ukrainian crisis, and “instead fuel an economic and trade war, in which Greece has unfortunately become involved.” Syriza concluded that the government hasn’t weighted Greece’s special interests and bilateral relations with Russia.

Then it was Slovakia whose premier Robert Fico criticized Ukraine for preparing sanctions against Russian persons and companies, and he has called on Ukraine not to approve them, expressing concerns that the legislation could result in a halt to natural gas supplies.

If the conflict between Ukraine and Russia escalates, the legal norm could cause interruption of natural gas supplies to Slovakia (and to Western Europe) via Ukraine from Russia, he said.

Slovakia depends on supplies of Russian gas. However, if gas supplies via Ukraine were interrupted, Slovakia would get gas through backflow from the West.

“It is strange that a country that has signed an association agreement with the EU and which we are trying to help is taking one-sided steps that endanger the individual economic interests of EU member countries, instead of coordinating its approach with the EU,” Fico said.

“We do not want to be a hostage in the Russian-Ukrainian problem. We expect Ukraine not to adopt formal steps that, if implemented, can endanger our interests. A country that has signed the association agreement should not behave like that,” Fico declared.

Poland too complained last week, however for now it finds the fault not with the “alliance” but with Russia for daring to retaliate to western sanctions.

Poland’s agriculture minister went on television to announce the country was taking action against Russia’s new import ban. “We believe Russia has broken international law in both its embargo against Poland and its embargo against the EU,” Marek Sawicki said. Russia banned the import of Polish fruit and vegetables in early August – a move Sawicki said would cost Poland 0.6 percent of GDP.

Good luck. It is only a matter of time before this futile anger at Putin turns not to the logical response to sanctions, but at the instigator of the sanctions themselves.

Then it was most vibrant economy in central Europe, the Czech Republic, where overnight the finance minister voiced the loudest anger at Russian sanctions yet. From Bloomberg:

And finally, it is the country whose fate is what this conflict is all about, because should Germany decide it has had enough of DC’s geopolitical brinksmanship, one which always “costs” European allies far more than it does the US, and aligns with the Russia-China-India axis, then the “Eurasian Crescent” will be complete, and the countdown to reserve currency transition may officially begin.

Sure enough, Bloomberg reports that sanctions against Russia are hurting sentiment at German companies, according to Focus magazine which cites the BGA Federation of German Wholesale and Foreign Trade, and the DIHK German Association of Chambers of Commerce and Industry.

According to the magazine, “loss of trust in Russian partners is hurting business more than the sanctions themselves, as German companies cut trade more than required.“

The implications are clear: cost-benefit analysis has shifted too far to the left, and while Germany was ok with supporting  the “west” in its game of escalating sanctions vs Putin, at this point there is no further support, and in fact the pendulum is starting to swing in the opposite direction.

So with increasingly more eastern and central European nations vocally opining against Russian sanctions, and with the Ukraine government now clearly engaging in open provocations to curry popular support for some “unfathomable” warmongering cause (unless of course it can provide evidence it did indeed destroy a Russian military convoy on its territory), how long until the “western” alliance finally folds under its own weight and has no choice but to roll back the sanctions and de-escalate, in the process handing Putin the biggest diplomatic knockout round yet?