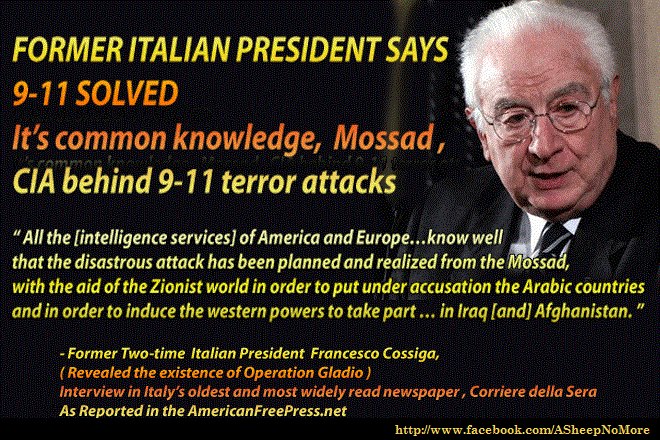 By the Staff of American Free Press

Former Italian President Francesco Cossiga, who revealed the existence of Operation Gladio, has told Italy’s oldest and most widely read newspaper that the 9-11 terrorist attacks were run by the CIA and Mossad, and that this was common knowledge among global intelligence agencies. In what translates awkwardly into English, Cossiga told the newspaper Corriere della Sera:

“All the [intelligence services] of America and Europe…know well that the disastrous attack has been planned and realized from the Mossad, with the aid of the Zionist world in order to put under accusation the Arabic countries and in order to induce the western powers to take part … in Iraq [and] Afghanistan.”

Cossiga’s tendency to be outspoken upset the Italian political establishment, and he was forced to resign after revealing the existence of, and his part in setting up, Operation Gladio. This was a rogue intelligence network under NATO auspices that carried out bombings across Europe in the 1960s, 1970s and ’80s. Gladio’s specialty was to carry out what they termed “false flag” operations—terror attacks that were blamed on their domestic and geopolitical opposition.

In March 2001, Gladio agent Vincenzo Vinciguerra stated, in sworn testimony, “You had to attack civilians, the people, women, children, innocent people, unknown people far removed from any political game. The reason was quite simple: to force … the public to turn to the state to ask for greater security.”

Cossiga first expressed his doubts about 9-11 in 2001, and is quoted by 9-11 researcherWebster Tarpley saying “The mastermind of the attack must have been a sophisticated mind, provided with ample means not only to recruit fanatic kamikazes, but also highly specialized personnel. I add one thing: it could not be accomplished without infiltrations in the radar and
flight security personnel.”

Coming from a widely respected former head of state, Cossiga’s assertion that the 9-11 attacks were an inside job and that this is common knowledge among global intelligence agencies is illuminating. It is one more eye-opening confirmation that has not been mentioned by America’s propaganda machine in print or on TV. Nevertheless, because of his experience and status in the world, Cossiga cannot be discounted as a crackpot.